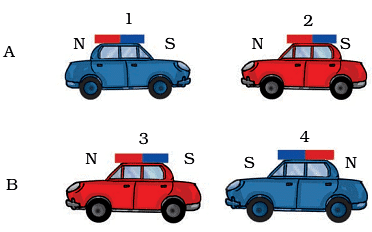 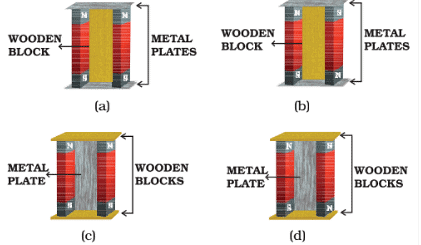 Ans: bSolution: option ‘b’ is the correct arrangement.Q.3. Three magnets A, B and C were dipped one by one in a heap of iron filing. Figure 13.3 shows the amount of the iron filing sticking to them.

Q.6. Fill in the blanks.(i) When a bar magnet is broken; each of the broken part will have _________ pole/poles.(ii) In a bar magnet, magnetic attraction is _____ near its ends.Ans: (i) two(ii) moreQ.7. Paheli and her friends were decorating the class bulletin board. She dropped the box of stainless steel pins by mistake. She tried to collect the pins using a magnet. She could not succeed. What could be the reason for this?Ans: The pins are made of stainless steel which is a non-magnetic material. Hence Paheli was unsuccessful in collecting the pins using a magnet.Q.8. How will you test that ‘tea dust’ is not adulterated with iron powder?Ans: We can use a magnet to test that tea dust is not adulterated with iron powder. If it has iron powder it will stick to the magnet.Q.9. Boojho dipped a bar magnet in a heap of iron filings and pulled it out. He found that iron filings got stuck to the magnet as shown in fig 13.4.

(a) Which of the iron bar is likely to be the strongest magnet?(b) Which of the iron bars is not a magnet? Justify your answer.Ans: (a) Iron bar (a) is likely to be the strongest magnet since more amount of iron filings have stuck to the magnet than any other bars.(b) Iron bar (b) is not a magnet since none of the iron filings sticks to the magnet.Q.11. A toy car has a bar magnet laid hidden inside its body along its length. Using another magnet how will you find out which pole of the magnet is facing the front of the car?Ans: We know that unlike poles attract each other while like poles repel each other. In case of a toy car, if the front of the toy car gets attracted to the north pole of the given magnet then it is the south pole of the bar magnet hidden inside the car and vice-versa.Q.12. Match column I with column II (One option of A can match with more than one option of B.

Ans: Here is the correct match:

Q.13. You are provided with two identical metal bars. One out of the two is a magnet. Suggest two ways to identify the magnet.Ans: There can be following ways to identify the magnet out of the two identical metal bars:(i) By attracting iron filings to the magnet we get to know which is a magnet.(ii) By using another magnet. If it is a magnet, like poles will repel each other while unlike poles will attract each other.

Q.14. Three identical iron bars are kept on a table. Two out of three bars are magnets. In one of the magnet the North-South poles are marked. How will you find out which of the other two bars is a magnet? Identify the poles of this magnet.Ans: The magnet on which the North-South poles are marked can be used to find the magnet out of two bars.Take the magnet with North-South poles are marked, keep it close to both the iron bars, hence both magnets get attracted to it since both are magnets.To find out the poles of an unknown magnet, we can use the repulsion test. North pole marked on the given magnet will repel the north pole of the unknown magnet and vice-versa.Q.15. Describe the steps involved in magnetising an iron strip with the help of a magnet.Ans: An iron strip can be magnetised by rubbing it with a magnet in a particular direction again and again as shown in below figure.

Here are the steps involved: 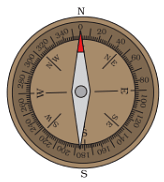 Ans: The magnetic needle of the compass will get deflected.

Q.17. Suggest an activity to prepare a magnetic compass by using an iron needle and a bar magnet.Ans: To prepare a magnetic compass, place the given iron needle on a wooden table now magnetize by rubbing a bar magnet over it repeatedly in a particular direction without lifting it. After that, it may be set in a way so that it can rotate freely when suspended. Hence, the iron needle can act as a compass and give north-south direction.Q.18. Boojho kept a magnet close to an ordinary iron bar. He observed that the iron bar attracts a pin as shown in fig 13.7.

Will the two pieces act as individual magnets? Mark the poles of these two pieces. Suggest an activity to verify your answer.Ans: Yes, the two broken pieces A and B will act as individual magnets. A magnet will always have two poles – the North and South Pole. Hence, now each piece will have two poles. By using the test of repulsion between the newly formed magnets we can detect the poles of broken magnets.Q.20. Suggest an arrangement to store a U shaped magnet. How is this different from storing a pair of bar magnets?Ans: U shaped magnet – One metal plate is placed across the two poles of the U shaped magnet to store it.

Bar magnet – Two metal plates and one wooden block is used and arranged as shown in the figure.

The document NCERT Exemplar Solutions: Fun with Magnets Notes | Study Science Class 6 - Class 6 is a part of the Class 6 Course Science Class 6.
All you need of Class 6 at this link: Class 6
Join Course