The document NCERT Exemplar Solutions: Heat Notes | Study Science Class 7 - Class 7 is a part of the Class 7 Course Science Class 7.
All you need of Class 7 at this link: Class 7

Q.4. Boojho has three thermometers as shown in Figure. He wants to measure the temperature of his body and that of boiling water. Which thermometer (s) should he choose? 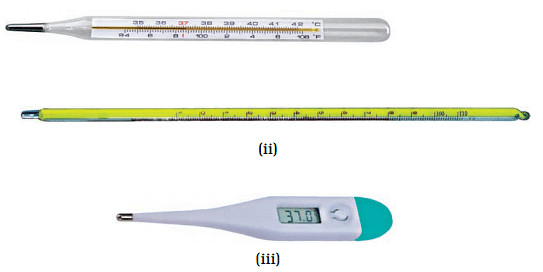 Q.5. Four arrangements to measure the temperature of the ice in a beaker with laboratory thermometer are shown in Figure (a, b, c and d). Which one of them shows the correct arrangement for accurate measurement of temperature? 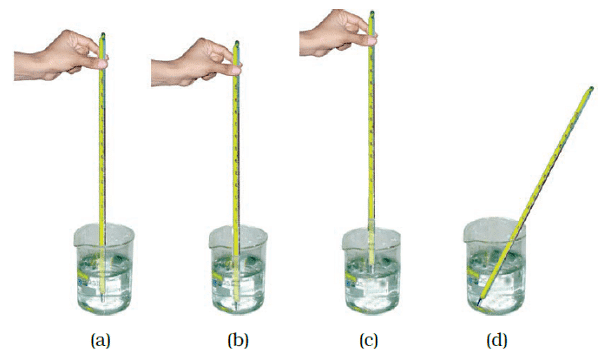 Q.6. Figure (a–d) shows a student reading a doctor’s thermometer. Which of the figure indicates the correct method of reading temperature? 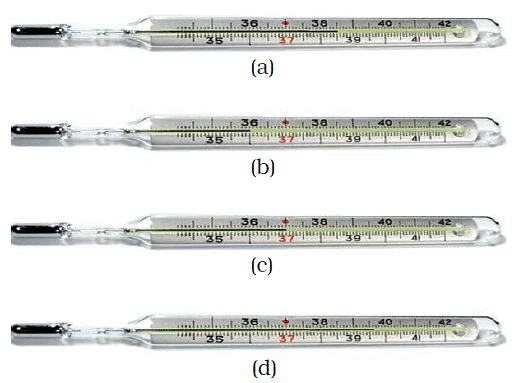 Which of the thermometers, A or B, will show a greater rise in temperature? Give a reason for your answer.

Ans: The answer is image b) because hot air rises up from candle which burns due to convection.

Q.3. To keep her soup warm Paheli wrapped the container in which it was kept with a woollen cloth. Can she apply the same method to keep a glass of cold drink cool? Give a reason for your answer

Ans: Yes, the woolen cloth can be used to keep a glass of cold drink cool because woollen is an insulator that will not allow escape or entry of heat.

Q.1. A circular metal loop is heated at point O as shown in Figure. 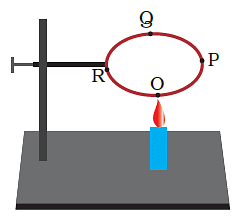 (i) In which direction would heat flow in the loop?(ii) In which order the pins at points P,Q and R fixed with the help of wax fall if points O, P, Q and R are equidistant from each other?Ans: The heat will flow in both the directions i.e. from O to P and O to R.

At first, the pins at R and P will fall simultaneously followed by the pin at Q.

Q.2. In the arrangements, A and B shown in Figure, pins P and Q are fixed to a metal loop and an iron rod with the help of wax. In which case are both the pins likely to fall at different times? Explain.

Ans:In case ‘B’ the pin P will fall before the pin Q because the heat will reach pin P first. In case ‘A’, the heat travels in both the directions and pins P and Q will fall simultaneously.

Q.3. For setting curd, a small amount of curd is added to warm milk. The microbes present in the curd help in setting if the temperature of the mixture remains approximately between 35°C to 40°C. At places, where room temperature remains much below the range, the setting of curd becomes difficult. Suggest a way to set curd in such a situation.Ans: In order to maintain the desired temperature container with curd should be wrapped with woollen or any other insulator. Curd can also be set in a room with temperature below optimum by keeping the container near the gas stove.

Q.4. You may have noticed that a few sharp jerks are given to clinical thermometer before using it. Why is it done so?Ans: The jerk will allow the mercury flow into the bulb above kink which will make mercury level below normal temperature.

Q.6. At a campsite, there are tents of two shades – one made with black fabric and the other with white fabric. Which one will you prefer for resting on a hot summer afternoon? Give a reason for your choice. Would you like to prefer the same tent during winter?Ans: In summer I would choose a tent with white colour fabric as white is a bad absorber and a good reflector of Heat. But in winter I would choose a tent with black colour fabric as black is a good absorber and bad reflector of heat.Q.7. While constructing a house in a coastal area, in which direction should the windows preferably face and why?Ans: The windows of houses in coastal areas should preferably face towards the sea as sea breeze will keep it cool during day time.

Q.8. Observe the picture given in Figure. Water is being boiled in a pan of wide base. 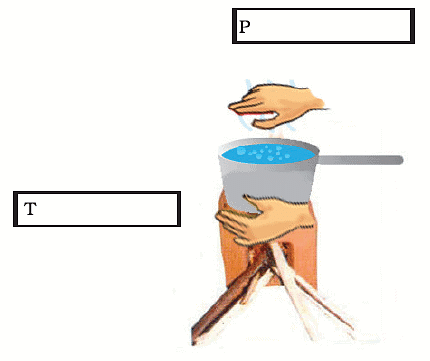 Which position P or T will feel warmer?

Fill up the boxes P and T to indicate the mode of flow of heat to the hand.Ans: Position ‘P’ will feel warmer due to rising up of hot air.

The length of wire PQ in case of A is equal to the diameter of the semicircle formed by the wire CDE, in case B. One pin is attached to each wire with the help of wax as shown in Figure. Which pin will fall first? Explain.Ans: The pin on the wire in case A will fall first as heat will react to it before it reaches the pin in case B.

The document NCERT Exemplar Solutions: Heat Notes | Study Science Class 7 - Class 7 is a part of the Class 7 Course Science Class 7.
All you need of Class 7 at this link: Class 7