The document NCERT Exemplar Solutions: Light Notes | Study Science Class 7 - Class 7 is a part of the Class 7 Course Science Class 7.
All you need of Class 7 at this link: Class 7

Q1. The image formed by a lens is always virtual, erect and smaller in size for an object kept at different positions in front of it. Identify the nature of the lens.Ans: The answer is Concave lens

Q3. State whether the following statements are True or False.(a) A concave lens can be used to produce an enlarged and erect image.(b) A convex lens always produces a real image.(c) The sides of an object and its image formed by a concave mirror are always interchanged.(d) An object can be seen only if it emits light.Ans:

Q2. Observe the figures given in Figure carefully.

The given figures show the path of light through lenses of two different types, represented by rectangular boxes A and B. What is the nature of lenses A and B?Ans:

Q3. Boojho made light from a laser torch to fall on a prism. Will he be able to observe a band of seven colours? Explain with a reason.Ans: No, Boojho cannot observe a band of colours because laser light gives torch of only one colour.

Q4. State the correct sequence (1-7) of colours in the spectrum formed by the prisms A and B, shown in Figure. 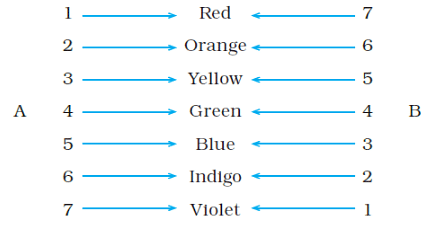 Q5. The side mirror of a scooter got broken. The mechanic replaced it with a plane mirror. Mention any inconvenience that the driver of the scooter will face while using it?Ans: A driver cannot see the traffic spread over the large area behind him.

Q7. An erect and enlarged image of an object is formed on a screen. Explain how this could be possible.

Ans: An erect and enlarged image of an object is formed on a screen if the object is placed upside down between F and 2F of the lens.

Q8. Two different types of lenses are placed on a sheet of newspaper. How will you identify them without touching?

Ans: The lens is a convex lens if the letters appear magnified and the lens is concave if the image appears shortened.

Q9. A shopkeeper wanted to fix a mirror which will give a maximum view of his shop. What type of mirror should he use? Give reason.Ans: Shopkeeper fixes convex mirror because forms images of object spread from large areas.

Q10. The distance between an object and a convex lens is changing. It is noticed that the size of the image formed on a screen is decreasing. Is the object moving in a direction towards the lens or away from it?Ans: An object is moving away from the lens.

By using a convex lens and a screen- In a convex lens, when the object is far away from the lens, the image is very close to the lens forming a real and inverted image.

Q2. It was observed that when the distance between an object and a lens decreases, the size of the image increases. What is the nature of this lens? If you keep on decreasing the distance between the object and the lens, will you still able to obtain the image on the screen? Explain.Ans: It is a convex lens.No, when the object is placed close to a convex lens then the image formed is virtual which cannot be obtained on the screen.

Q3. You are given three mirrors of different types. How will you identify each one of them?Ans: We can identify the mirrors by forming images of an object which are given as below:

The document NCERT Exemplar Solutions: Light Notes | Study Science Class 7 - Class 7 is a part of the Class 7 Course Science Class 7.
All you need of Class 7 at this link: Class 7