The document NCERT Exemplar Solutions: Nutrition in Animals Notes | Study Science Class 7 - Class 7 is a part of the Class 7 Course Science Class 7.
All you need of Class 7 at this link: Class 7

Q.2. Which of the following pair of teeth differ in structure but are similar in function?(a) canines and incisors.(b) molars and premolars.(c) incisors and molars.(d) premolars and canines.Ans: bExplanation: Our teeth tear, grind the food before swallowing food. There are four types of teeth.Incisors: front eight teeth, 4 in the upper jaw and 4 in the lower jaw.Canines: There are 4 canines, one on each side of each jaw.Premolars: There are 8 premolars. Two premolars in each of the upper and lower jaws.Molars: There are 12 molars, three in each half of both upper and lower jaws.

Q.4. The swallowed food moves downwards in the alimentary canal because of(a) force provided by the muscular tongue.(b) the flow of water taken with the food.(c) gravitational pull.(d) the contraction of muscles in the wall of the food pipe.Ans: dExplanation: Muscles of Esophagus pushes food down by the movement of the wall of the food pipe. Actually this movement takes place throughout the alimentary canal and pushes the food downwards.

Q.5. The acid present in the stomach(a) kills the harmful bacteria that may enter along with the food.(b) protects the stomach lining from harmful substances.(c) digests starch into simpler sugars.(d) makes the medium alkaline.Ans: aExplanation: The stomach consists of Hydrochloric acid which kills the bacteria that enter through food. Thus stomach acid is helping in protecting us from harmful bacteria.

Q.7. Read the following statements with reference to the villi of the small intestine.(i) They have very thin walls.(ii) They have a network of thin and small blood vessels close to the surface.(iii) They have small pores through which food can easily pass.(iv) They are finger-like projections. Identify those statements which enable the villi to absorb digested food.(a) (i), (ii) and (iv)(b) (ii), (iii) and (iv)(c) (iii) and (iv)(d) (i) and (iv)Ans: aExplanation:Inner walls of the small intestine have thousands of finger-like outgrowths called villi (singular villus). Villi increase the surface area for absorption of the digested food. Each villus has a network of thin and small blood vessels close to its surface. The surface of the villi absorbs the digested food materials. The absorbed substances are transported via the blood vessels to different organs of the body where they are used to build complex substances such as the proteins required by the body.

Q.3. Choose the odd one out from each group and give reasons.(i) liver, salivary gland, starch, gall bladder(ii) stomach, liver, pancreas, salivary gland(iii) tongue, absorption, taste, swallow(iv) oesophagus, small intestine, large intestine, rectumAns: The answer is Starch because starch is a carbohydrate whereas liver, salivary gland and gall bladder are the glands.The answer is stomach because others are digestive glandsAbsorption is the answer because, tongue, swallow and taste are related to buccal cavity but not absorption.The small intestine is the answer because oesophagus, large intestine and rectum will not take part in digestion whereas small intestine plays the main role in the digestion process.

Q.4. You were blindfolded and asked to identify the drinks provided in two different glasses. You could identify drink A as lime juice and B as bitter gourd juice. How could you do it in spite of being blindfolded?Ans: We can identify the juices with the help of different taste buds present in the tongue.

Q.6. Following statements describe the five steps in animal nutrition. Read each statement and give one word for each statement. Write the terms that describe each process.(a) Transportation of absorbed food to different parts of the body and their utilisation.(b) Breaking of complex food substances into simpler and soluble substances.(c) Removal of undigested and unabsorbed solid residues of food from the body.(d) Taking food into the body.(e) Transport of digested and soluble food from the intestine to blood vessels.

Q.1. Match the animals in Column I with their mode of feeding listed in Column II 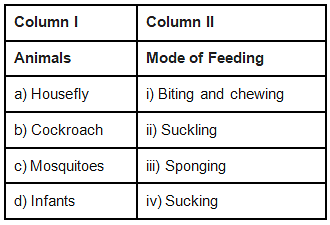 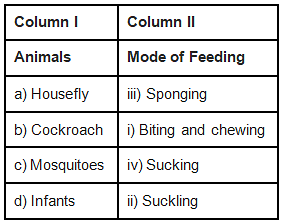 Ans: In test-tube A colour of iodine changes to blue-black because of the reaction of iodine with starch. In test-tube B colour will not change because salivary amylase acts on starch while chewing reducing it to simpler sugars.

Q.4. Match the organs in Column I with the words listed in Column II. 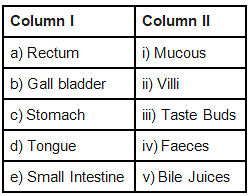 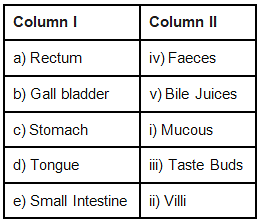 Q.5 Ruminants such as cows and buffaloes swallow their food hurriedly and then sit restfully and chew their food. Can you reason why?Ans: To digest the food completely ruminants keep the food as cuds.

Q.6. Boojho and Paheli were eating their food hurriedly so that they could go out and play during the recess. Suddenly, Boojho started coughing violently. Think of the reasons why he was coughing and discuss with your friends.Ans: Sometimes, when one eats hurriedly, talks or laughs while eating, the flap-like valve, epiglottis closing the passage of windpipe remains open. The food may enter the windpipe and coughing helps to clear it.

Q.1. Fill in the blanks using the words listed below.

Ans:(a) The digestion of all food components is completed by the Intestinal juice.(b) Large intestine absorbs water and some salts from the undigested food.(c) Tongue is attached at the back to the floor of the mouth cavity and is free at the front.(d) Amoeba pushes out Pseudopodia around the food and traps it in a food vacuole.

Q.2. Label the below given Figure as directed below in (i) to (iv) and give the name of each type of teeth. 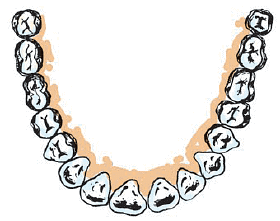 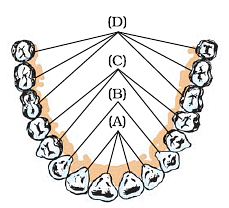 Q.3. Read the following passage carefully and answer the questions that follow it. Bile juice is stored in a sac called, gall bladder, located near its organ of secretion, liver. The gall bladder releases the bile juice into the small intestine whenever food reaches there. Though bile juice is devoid of any digestive enzymes, it is required for the digestion of fats. The fats cannot be digested easily because they are insoluble in water and are present as large globules. Bile juice breaks down big fat droplets into smaller droplets. These are then easily digested by the enzymes released from the pancreas.(a) Which organ secretes the bile juice?(b) Why is digestion of fats difficult as compared to that of other nutrients?(c) How does bile juice help in digestion of fat?(d) Where is the digestion of fat completed?(e) Does bile juice digest fat completely?Ans:(a) Liver(b) Insolubility of fat in water.(c) Breaks down big fat droplets into smaller droplets.(d) Small intestine(e) No

Q.4. Label the following parts in Figure and name them. 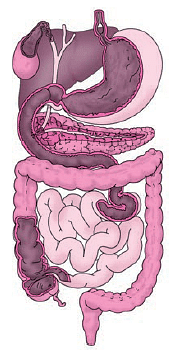 (a) The largest gland in our body.(b) The organ where protein digestion starts.(c) The organ that releases digestive juice into the small intestine.(d) The organ where bile juice gets stored.Ans:(a) Liver(b) Stomach(c) Pancreas(d) Gall bladder 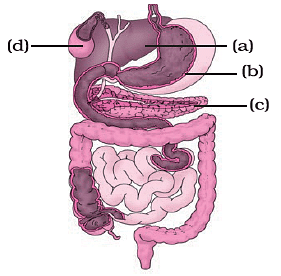 Q.5. Solve the crossword given in Figure 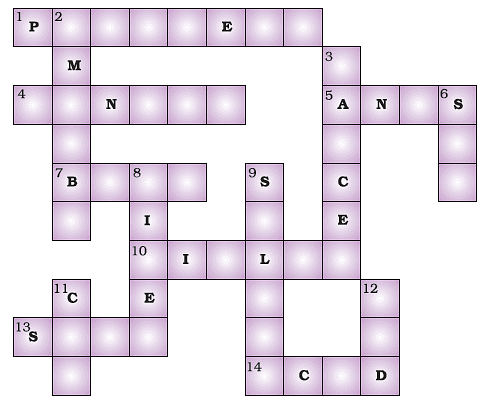 Across1. Cream-coloured digestive gland3. Undigested excretory solid residues4. An organ that mixes saliva with the food5. Point of defecation

7. Stored in the gall bladder10. Finger-like outgrowth in the small intestine13. Kind of taste buds14. Kills bacteria in the stomach

Down2. Feeds with the help of pseudopodia6. Total number of molars in one jaw of an adult8. Largest gland9. Watery secretion in the mouth11. A ruminant12. Form of food chewed by ruminants 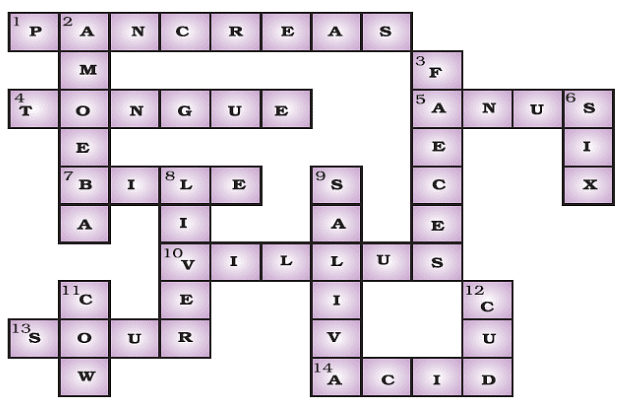 The document NCERT Exemplar Solutions: Nutrition in Animals Notes | Study Science Class 7 - Class 7 is a part of the Class 7 Course Science Class 7.
All you need of Class 7 at this link: Class 7