The document NCERT Exemplar Solutions: Reproduction in Plants Notes | Study Science Class 7 - Class 7 is a part of the Class 7 Course Science Class 7.
All you need of Class 7 at this link: Class 7

Q.1. Which of the following parts of a plant take part in sexual reproduction?(i) Flower(ii) Seed(iii) Fruit(iv) Branch Choose the correct answer from below.(a) (i) and (ii)(b) (i), (ii) and (iii)(c) (iii) and (iv)(d) (ii), (iii) and (iv)Ans: bExplanation:Functions of sexual reproduction are carried out by flowers. After fertilization, the ovaries grow into fruits and seeds develop from ovules.

Q.2. Lila observed that a pond with clear water was covered up with green algae within a week. By which method of reproduction did the algae spread so rapidly?(a) Budding(b) Sexual reproduction(c) Fragmentation(d) PollinationAns: cExplanation:An alga breaks up into two or more fragments. These fragments or pieces grow into new individuals. This process continues and they cover a large area in a short period of time.

Seeds of drumstick and maple have wings which help them to be easily carried away by the wind. Various seeds and fruits have some special feature due to which they are carried away in a particular way (by wind, water or animal).

Q.6. Which of the following statements is/are true for sexual reproduction in plants?(i) Plants are obtained from seeds.(ii) Two plants are always essential.(iii) Fertilisation can occur only after pollination.(iv) Only insects are agents of pollination.Choose from the options given below.(a) (i) and (iii)(b) (i) only(c) (ii) and (iii)(d) (i) and (iv)Ans: aExplanation:For sexual reproduction in plants occurs within a plant hence option ii) is wrong . Pollinations is carried by various agents such as wind, insects and animals hence option iv) is wrong.

Q.2. Pick the odd one out from the following on the basis of mode of reproduction and give reason for it.Sugarcane, Potato, Rice, Rose

Ans: Rice does not reproduce by vegetative propagation whereas the other three plants do. Hence Rice is the odd one.

Q.4. Which type of pollination does Figure indicate? 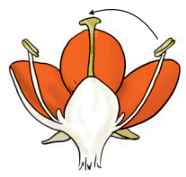 Q.4. One morning as Paheli strolled in her garden she noticed many small plants which were not there a week ago. She wondered where they had come from as nobody had planted them there. Explain the reason for the growth of these plants.Ans: The seeds from the tree may have fallen below and germinated into small plants. The seeds might have brought to the garden by agents like a wind which germinated and grown into small plants. 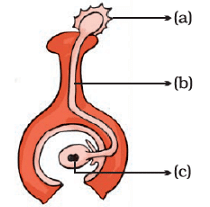 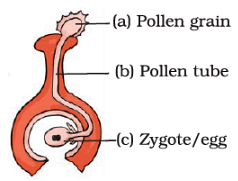 Q.2. When you keep food items like bread and fruits outside for a long time especially during the rainy season, you will observe a cottony growth on them.(a) What is this growth called?(b) How does growth take place?Ans:a) It is a bread mold which is a fungusb) Bread mold grows from the spores.

Ans:i) and ii) are dispersed by wind;

iii) is dispersed by an animal.

Q.4. Coconut is a large and heavy fruit. How is it adapted for dispersal by water?Ans: Coconut fruit has spongy fibers on its surface which make it float in water.

Q.1. In the figure of a flower given in Figure, label the parts whose functions are given below and give their names.(a) The part which contains pollen grains.(b) The part where the female gamete is formed.(c) The female reproductive part where pollen grains germinate.(d) The colourful part of the flower which attracts insects. 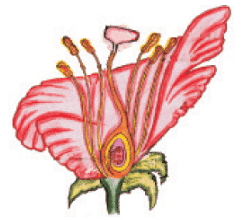 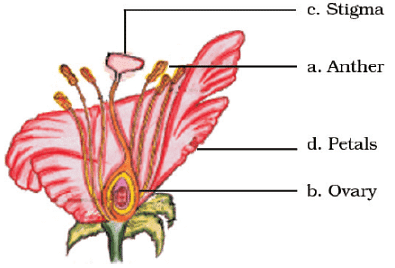 Ans: The male and female gametes fuse to form a (a) zygote during the process of (b) fertilization. This grows into an (c) embryo which is enclosed within a seed. After fertilisation, the ovules develop into (d) seed and the ovary develops into a (e) fruit. 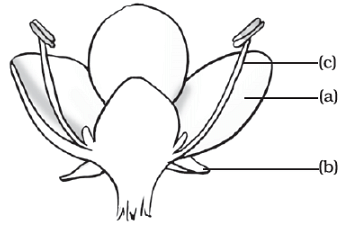 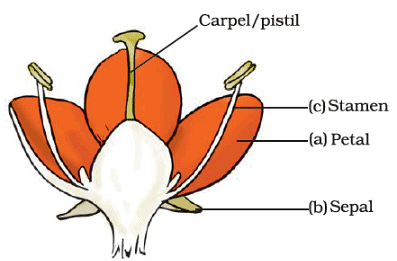 The document NCERT Exemplar Solutions: Reproduction in Plants Notes | Study Science Class 7 - Class 7 is a part of the Class 7 Course Science Class 7.
All you need of Class 7 at this link: Class 7