The document NCERT Exemplar Solutions: Weather, Climate & Adaptations of Animals to Climate Notes | Study Science Class 7 - Class 7 is a part of the Class 7 Course Science Class 7.
All you need of Class 7 at this link: Class 7

Q.3. Which of the following briefly describes the desert climate?(a) Hot and humid(b) Dry and humid(c) Hot and dry(d) Hot and wetAns: cExplanation:In Desert temperature is high during most parts of the year and the desert receives very less rainfall hence the climate in the desert will be hot and dry.

Q.4. Paheli went to a wildlife sanctuary where she saw dense vegetation of trees, shrubs, herbs and also a variety of animals like monkeys, birds, elephants, snakes, frogs, etc. The most likely location of this sanctuary is in the –(a) temperate region(b) tropical region(c) polar region(d) coastal regionAns: bExplanation:Wildlife sanctuary which Paheli went was of a tropical region because this region has a favorable condition to support a wide variety of living organisms. Remaining options like temperate region, polar and coastal region will not support a variety of wildlife as a tropical region.

Q.5. Given below are some adaptive features of animals:(i) A layer of fat under the skin(ii) Long, curved and sharp claws(iii) Slippery body(iv) Thick white furWhich of them are the adaptive features of a polar bear?(a) (i) only(b) (i) and (ii) only(c) (i), (ii) and (iii) only(d) (i), (ii), and (iv) onlyAns: dExplanation:To live in an extremely cold climate, the polar bear has many adaptations, such as:(a) The layer of fat under the skin for insulation.(b) Long curved and sharp claws to walk and run on slippery ice.(c) Thick white fur. White colour protects it from predators and thick layer keep it warm.(d) Other features are rounded body, small ears and a strong sense of smell.

Q.6. Which of the following statement is incorrect for penguins?(a) They huddle together(b) They cannot swim(c) They have webbed feet(d) They have streamlined bodyAns: bExplanation:Penguin is white and merges well with the white background. It has a thick skin and a lot of fat to protect it from cold. Penguins huddled together do to keep themselves warm. Like polar bears, penguins are also good swimmers. Their bodies are streamlined and their feet have webs, making them good swimmers.

Q.7. Read the following environmental conditions of tropical rain forests.(i) A hot and humid climate(ii) Unequal lengths of day and night(iii) Abundant rainfall(iv) Abundant light and moistureIdentify the conditions from the above list that are responsible for the presence of large number of plants and animals in tropical rain forests.(a) (i) and (ii)(b) (i) and (iii)(c) (i), (iii) and (iv)(d) (ii) and (iv)Ans: cExplanation:The tropical region has generally a hot climate because of its location around the equator. Even in the coldest month, the temperature is generally higher than about 15°C. During hot summers, the temperature may cross 40°C. Days and nights are almost equal in length throughout the year. These regions get plenty of rainfall. Because of these reasons tropical rain forests support a large number of plants and animals.

Q.8. The coldest region on earth is the –(a) polar region(b) tropical region(c) temperate region(d) coastal regionAns: aExplanation:Polar regions are covered with snow and it is very cold for the most part of the year. For six months the sun does not set at the poles while for the other six months the sun does not rise. In winters, the temperature can be as low as –37°C.

Q.1. “A fish dies when taken out of water whereas a wall lizard will die if kept underwater.” Mention the term used to describe such abilities that allow fish and lizard to survive in their respective habitats.Ans: Adaptation

Q.2. Give one example of an animal that can live both in water and on land.Ans: Frog

Q.4. Unscramble the following words using the hints given against them.MATLICE (Hint: weather pattern in a region over a period of time)AROPL (Hint: coolest region on earth)TREHMEOMRET (Hint: used to measure temperature)UHIDYTMI (Hint: feature of weather)Ans:(i) Climate(ii) Polar(iii) Thermometer(iv) Humidity

Q.1. Match the animals mentioned in Column I with their characteristic features given in Column II. 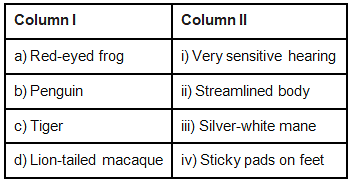 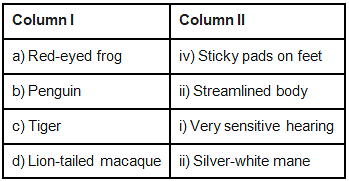 Q.2. Why is it difficult to predict the weather of a place while it is easy to predict its climate?Ans: Because weather can vary over a short period of time whereas climate as it is the average weather pattern taken over a long time.

Q.4. Write two common adaptive features of a polar bear which help in keeping it warm.Ans:(a) A layer of fat under the skin for insulation.

(b) Long curved and sharp claws to walk and run on slippery ice.

Q.5. Mention two adaptive features of penguin that help it in swimmingAns:Their bodies are streamlined and their feet have webs, making them good swimmers.

Q.6. Differentiate between:(i) Weather and climate(ii) Humidity and rainfall(iii) Climates of the polar region and tropical rain forest(iv) Maximum and minimum temperatures of the dayAns:

Long Answer QuestionsQ.1. Fill in the blanks in the paragraph given below.

The weather of a place is the day-to-day condition of the a)  with respect to b) , c) , d), e) speed at that place, while climate is the f) weather pattern has taken over many years.

Ans:The weather of a place is the day-to-day condition of the a) atmosphere with respect to b) Temperature, c) Humidity, d) rainfall, e) wind speed at that place, while climate is the f) average weather pattern has taken over many years.

Q.2. Given below is a list of climatic conditions and some examples of animals. Read them carefully and place the items in the relevant columns as shown. 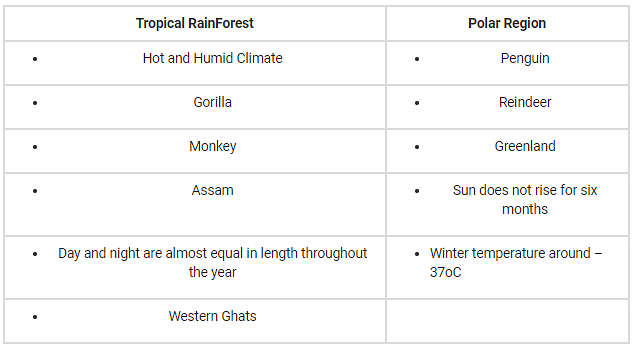 The document NCERT Exemplar Solutions: Weather, Climate & Adaptations of Animals to Climate Notes | Study Science Class 7 - Class 7 is a part of the Class 7 Course Science Class 7.
All you need of Class 7 at this link: Class 7