The document NCERT Exemplar Solutions: Winds, Storms & Cyclones Notes | Study Science Class 7 - Class 7 is a part of the Class 7 Course Science Class 7.
All you need of Class 7 at this link: Class 7

Q.1. A fire alarm usually detects smoke in case of fire. Where should such an alarm be placed in a room?(a) Near the door(b) On the floor(c) On any wall(d) On the ceilingAns: dExplanation:In case of fire, the air above the fire gets heated hence fire alarms are set on the ceiling

Q.2. Four schematic diagrams are shown in Figure 8.1 to depict the direction of the sea breeze. Which of them gives the correct direction?(a) 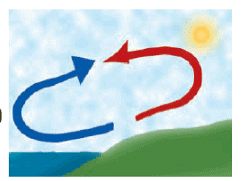 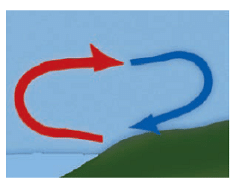 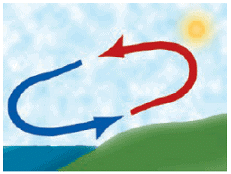 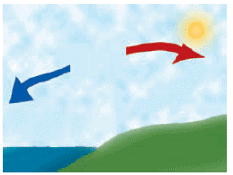 Soln: cExplanation:During summer land becomes heated, air over land rises. This makes the cooler air blow from the sea towards the land. This air is called as the sea breeze.

Q.3. Figure shows a child blowing air with a straw near the opening of another straw which has its other end in a soft drink bottle. It was observed that the level of the soft drink in the straw rises up as soon as air is blown over its open end. Which one of the following best explains the reason for the rise in the level of the drink? 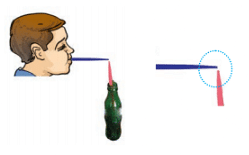 Q.8. Name the ocean which is mainly responsible to bring rain-bearing monsoon winds to Kerala coast in June every year?

Ans:(i) The air around us exerts Pressure.(ii) The moving air is called Wind.(iii) The main cause of wind movement is uneven heating on the earth.(iv) High-speed wind can cause cyclone in regions of low pressure.

Q.10. State whether the following statements are True or False:(i) If wind flows from land to the ocean, then it is daytime.(ii) A very high-pressure system, with very high-speed wind surrounding it forms a cyclone.(iii) The coastline of India is not vulnerable to cyclones.(iv) Warm air is lighter than cool air.Ans:(i) False- if the wind blows from land to the ocean, then it is night time because, at night, the water cools down more slowly than the land. So, the cool wind from the land moves towards the ocean.(ii) False – a very low-pressure system, with very high-speed winds revolving around it, forms a cyclone.(iii) False- the whole coastline of India is vulnerable to cyclones, particularly the east coast.(iv) True

Ans: Exhaust fan of B will expel the hot air effectively as air rises up and her fan is at a greater height than A’s.

Q.12. Why is it advisable not to shut all the doors and windows during a storm?Ans: In order to avoid the roof from getting blown away due to the low pressure created by heavy wind.

Q.14. Figure shows a diagrammatic representation of trees in the afternoon along a sea coast. State on which side is the sea; A or B? Give reasons for your choice.

Ans: Sea is on the side of B as the wind is blowing from the sea to the land.

Q.15. A flag mounted on a flag post near the sea coast flutters in the direction of sea. At what time of the day does this happen – at midnight or in the afternoon?Ans: Midnight, because of a land breeze.

Q.1. Match Column I with Column II. There can be more than one match. 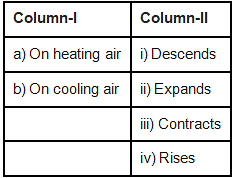 Q.2. Paheli kept an empty bottle made of plastic inside a refrigerator. After few hours, when she opened the refrigerator she found the bottle had collapsed. Explain the possible reason.Ans: The air inside the bottle contracts due to low temperature hence the bottle collapses due to the outside pressure.

Q.3. When strong/high-speed wind blows, an umbrella held upright at times gets upturned. Explain the reason.Ans: Umbrella upturns because of the high-speed water passing through umbrella creates low pressure.

Q.4. Suggest some precautions to be taken to prevent the roof of a tin sheet from flying away during a fierce wind stormAns:(i) Put heavy stones on it.(ii) Screw it tight.

Q.1. Describe an activity to demonstrate that warm air is lighter than cool air.Ans: Take two paper bags or empty paper cups of the same size. Hang the two bags in the inverted position on the two ends of a metal or wooden stick. Tie a piece of thread in the middle of the stick. Hold the stick by the thread (Fig) as in a balance. Put a burning candle below one of the bags as shown in the figure. As the warm air rises up, it pushes the bag above the candle. 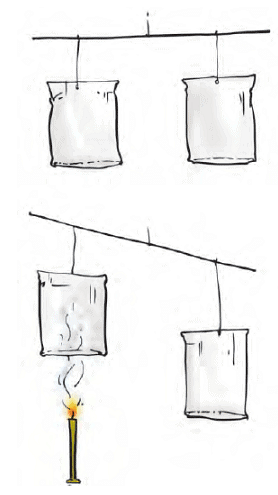 Q.2. The picture in Figure shows tree line along the sea coast on an island near the equator. As shown, the tree tops are permanently bent in one direction. Are the trees bent towards the sea or away from it? Explain. 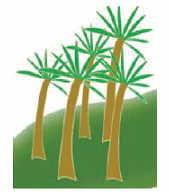 Ans: In the coastal regions of an island near the equator, heating and cooling of air are a regular phenomenon. During the daytime, the land gets heated up quickly compared to the water in the sea. The air above the land gets heated and rises up and is replaced by the cool air from the sea giving rise to the sea breeze. This sea breeze makes the trees to bend towards the land.

Q.3. Identify the names of six natural phenomena from the following word diagram given as Figure. 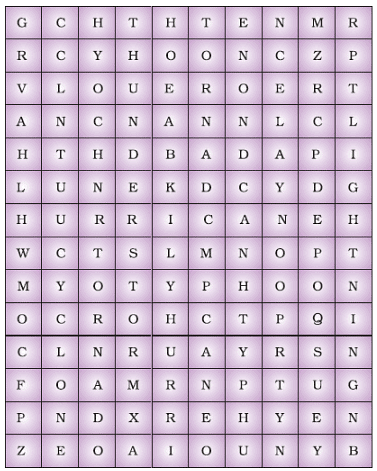 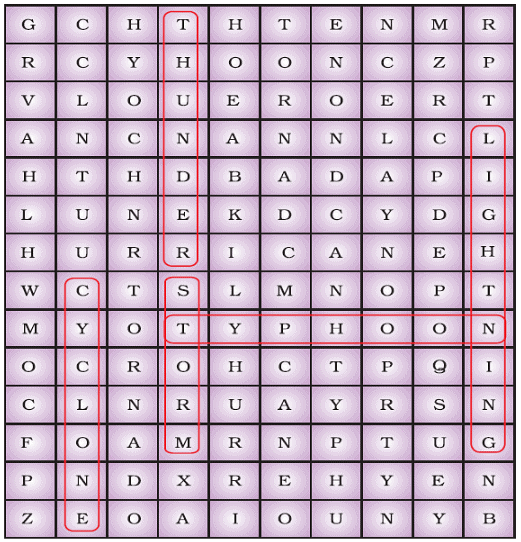 The document NCERT Exemplar Solutions: Winds, Storms & Cyclones Notes | Study Science Class 7 - Class 7 is a part of the Class 7 Course Science Class 7.
All you need of Class 7 at this link: Class 7