Q.1. As we go from species to kingdom in a taxonomic hierarchy, the number of common characteristics(a) Will decrease(b) Will increase(c) Remain the same(d) May increase or decrease

Q.2. Which of the following ‘suffixes’ used for units of classification in plants indicates a taxonomic category of 'family’?(a) —ales(b) —onae(c) —aceae(d) —ae

NCERT Reference: Topic Page No. 8 of Chapter 1 of NCERT

Correct Answer is Option (c)Genus comprises a group of related species with more common characteristics than species of other genera.

Example: Panthera leo is a lion and Panthera tigris is a tiger. They both have several common features but are species of genus Panthera. Panthera is a genus that has less common characters than species. 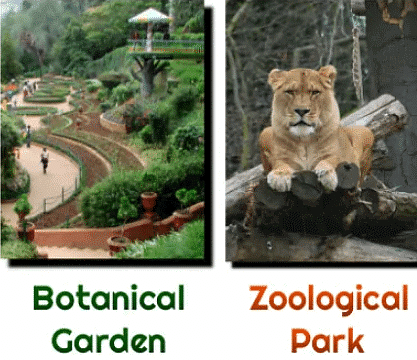 Q.7. The taxonomic key is one of the taxonomic tools in the identification and classification of plants and animals. It is used in the preparation of:(a) Monographs(b) Flora(c) Both (a) and (b)(d) None of these

A taxonomic key is a simple tool that is used to identify a living organism. The keys are used in the preparation of both monographs and flora.(i) Flora contains the actual account of habitat and distribution of plants of a given area. These provide the index to the plant species found in a particular area.(ii) Manuals are useful in providing information to identify names of species found in an area. Monographs contain information on any one taxon, i.e. any one genus or family at a particular time. They also help with incorrect identification.

NCERT Reference: Page No. 14 of Chapter 1 of NCERT

Q.9. Which of the following is a defining characteristic of living organisms?(a) Growth (b) Ability to make sound(c) Reproduction (d) Response to external stimuli 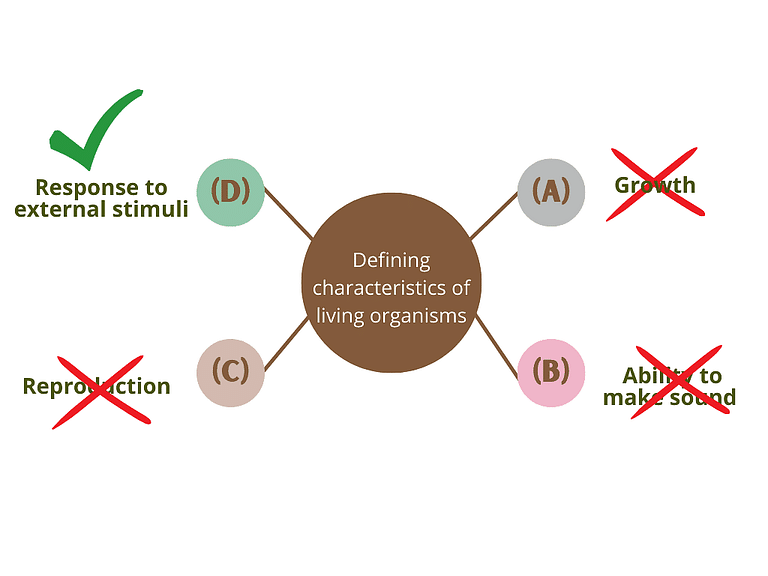 NCERT Reference: Topic under “what is living” from chapter 1 of NCERT

Q.10. Match the following and choose the correct option. 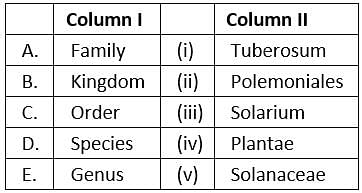 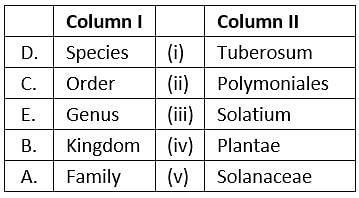 Q.1. Linnaeus is considered the Father of Taxonomy. Name two other botanists known for their contribution to the field of plant taxonomy?

The natural system of classification for flowering plants was given by George Bentham and Joseph Dalton Hooker, in a three-volume of Genera Plantarum.

Q.2. What does ICZN stand for?

The keys are based on the contrasting characters generally in a pair called a couplet. It represents the choice made between two opposite options. This results in the acceptance of only one and the rejection of the other.NCERT Reference: Topic “key” from Chapter 1 from NCERT

Monographs contain information on anyone taxon, i.e. anyone genus or family at a particular time.NCERT Reference: Topic “Key” from Chapter 1 from NCERT 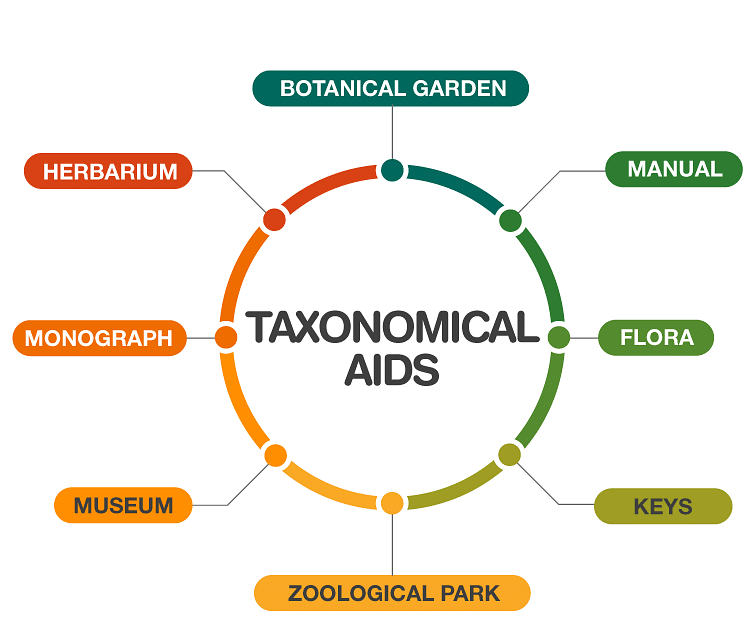 Metabolism refers to a series of chemical reactions that occur in a living organism to sustain life.NCERT Reference: Page No. 4- Reproduction from Chapter 1 of NCERT

Q.1. A ball of snow when rolled over snow increases in mass, volume, and size. Is this comparable to growth as seen in living organisms? Why?

No, this is not comparable to growth as seen in living organisms. Non-living objects like snowball also grow if we increase body mass as a criterion for growth. However, this kind of growth exhibited by non-living objects is by accumulating material on the surface (accretion). In living organisms, growth is from the inside because of accumulation of material inside the cells of the organisms i.e. through mitosis & meiosis.NCERT Reference: Page No. 3- Growth from Chapter 1 of NCERT

Q.2. In a given habitat we have 20 plant species and 20 animal species. Should we call this ‘diversity’ or ‘biodiversity’? Justify your answer.

In a given habitat we have 20 plant species and 20 animal species. We can call this ‘biodiversity’. Because “bio” refers to living and diversity means “variation or variety”. Each different kind of plant, animal, or organism that we see represents a species. This refers to biodiversity or the number and types of organisms present on earth.NCERT Reference: Topic “Diversity in The Living World” from Chapter 1 from NCERT

Q.3. International Code of Botanical nomenclature (ICBN) has provided a code for the classification of plants. Give hierarchy of units of classification botanists follow while classifying plants and mention different ‘Suffixes’ used for the units. 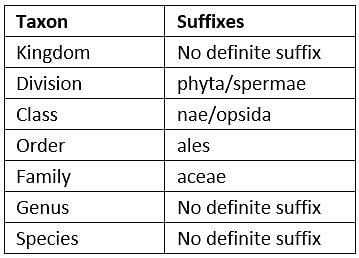 Ecotypes are plant species that show morphological differences in response to an altitudinal gradient. When plants are exposed to climatic and other biotic & abiotic differences, their populations undergo genetic changes in order to adapt to their new surroundings. When given similar conditions, however, these groups can interbreed and achieve the same morphological features.

Euphorbia hirta, Arabidopsis thaliana, and other plants are examples. 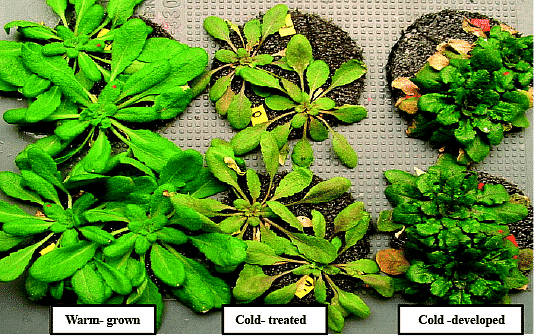 Q.5. How do you prepare your own Herbarium sheets? What are the different tools you carry with you while collecting plants for the preparation of a herbarium? What information should a preserved plant material on the herbarium sheet provide for taxonomic studies?

Following are the various steps of preparing a herbarium: 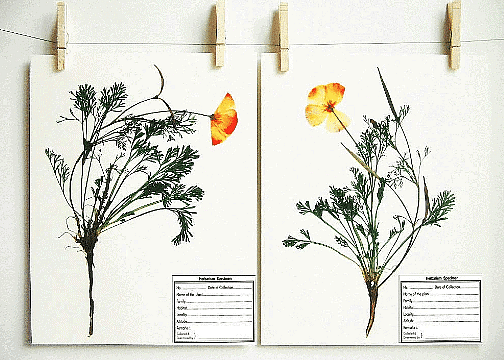 (i) Collection: This step involves the collection of a particular species.

(ii) Pressing: This step involves spreading the specimen and pressing it between two sheets of paper to preserve most parts.

(iii) Drying: This step usually involves drying under the sun.

(iv) Poisoning: Sometimes, antifungal treatment needs to be given to the specimen to preserve it for a longer duration.

(v) Mounting: This step involves mounting the specimen over a herbarium sheet.

(vi) Labelling: This step involves writing full information and classification of the specimen.

Q.6. What is the difference between flora, fauna, and vegetation? Eichhornia crassipes is called an exotic species while Rauwolfia serpentina is an endemic species in India. What do these terms exotic and endemic refer to?

Q.7. A plant may have different names in different regions of the country or world. How do botanists solve this problem?

NCERT Reference: Topic “Diversity in The Living World” from Chapter 1 from NCERT

Q.8. Brinjal and potato belong to the same genus Solanum, but to two different species. What defines them as separate species?

Properties of cellular organelles are not present in the molecular constituents of the organelle but arise as a result of interactions among the molecular components comprising the organelle. For example, Ribosome is a non-membrane bound cell organelle, which is a site for protein synthesis. It is made of proteins and rRNA. If these components are separated, individually, they cannot perform the process of protein synthesis. So, the given statement is true.

Q.10. The number and kinds of an organism are not constant. How do you explain this statement?

For example, Reptiles dominated the Mesozoic era, with dinosaurs abundant and diverse, whereas flowering plants had only recently emerged.

The document NCERT Exemplars: The Living World - 1 Notes | Study Biology Class 11 - NEET is a part of the NEET Course Biology Class 11.
All you need of NEET at this link: NEET
Join Course