Q.1. What is meant by living? Give any four defining features of life forms.Ans. Growth, reproduction, cellular organization, ability to sense the environment, and mount a suitable response, metabolism, self-replication, self-organisation, interaction, and emergence are unique features of living organisms.Some other characteristics of living organisms are life-span, movements, adaptations, variations and homeostasis, etc. Living organisms are self-replicating, evolving and self-regulating interactive systems capable of responding to external stimuli. 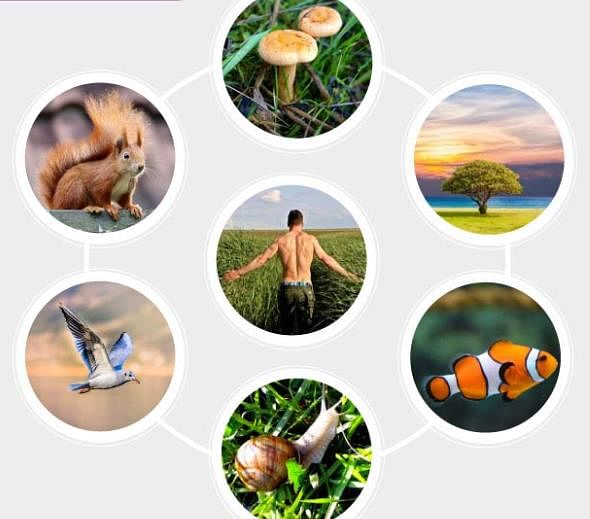 Living Organisms(i) Metabolism: There are thousands of metabolic reactions occurring simultaneously inside all living organisms, be they unicellular or, multicellular.

(ii) Cellular Organization: All living organisms are composed of cells and products of cells. Hence, the cellular organization of the body is the defining feature of life forms.

(iii) Consciousness: Perhaps, the most obvious and technically complicated feature of all living organisms is this ability to sense their surroundings or environment and respond to these environmental stimuli which could be physical, chemical or biological.

(iv) Interactions: All living phenomena are due to underlying interactions. Properties of tissues are not present in the constituent cells. Similarly, properties of cellular organelles are not present in the molecular constituents of the organelle but arise as a result of interactions among the molecular components comprising the organelle. These interactions result in emergent properties at a higher level of organization. This phenomenon is true in the hierarchy of organisational complexity at all levels.Q.2. A scientist has come across a plant which he feels is a new species. How will he go about its identification, classification and nomenclature? Ans. Obviously, nomenclature or naming is only possible when the organism is described correctly. This is identification. Reference collections of plant specimens are collected into herbarium and identified. Most plant parts are dried, pressed, mounted on herbarium sheets and stored.

Q.3. Brassica campestris Linn(a) Give the common name of the plant.(b) What do the first two parts of the name denote?(c) Why are they written in italics?(d) What is the meaning of Linn written at the end of the name?Ans. (a) Mustard.(b) The first word in a biological name represents the genus while the second component denotes the specific epithet.(c) Both word in a biological name, when handwritten, are separately underlined, or printed in italics to indicate their Latin origin.(d) Name of the author appears after the specific epithet, i.e. at the end of the biological name and is written in an abbreviated form, Example Brassica campestris Linn. It indicates that this species was first described by Linnaeus.Q.4. What are Taxonomical Aids? Give the importance of herbaria and museums. How are Botanical gardens and Zoological parks useful in conserving biodiversity?Ans. Taxonomic studies of various species of plants, animals and other organisms are useful in agriculture, forestry, industry and in general in knowing our bio-resources and their diversity.(i) Herbarium is a storehouse of collected plant specimens that are dried, pressed and preserved on sheets. Further, these sheets are arranged according to a universally accepted system of classification.(ii) The herbarium sheets carry a label providing information about date and place of collection, English, local and botanical names, family, collector’s name, etc. Herbaria also serve as quick referral systems in taxonomical studies.(iii) Biological museums are generally set up in educational institutes such as schools and colleges. Museums have collections of preserved plant and animal specimens for study and reference. Specimens are preserved in the containers or jars in preservative solutions. Plant and animal specimens may also be preserved as dry specimens.(iv) Insects are preserved in insect boxes after collecting, killing and pinning. Larger animals, like birds and mammals, are usually stuffed and preserved. Museums often have collections of skeletons of animals too.(v) Biodiversity conservation may be in-situ as well as ex-situ. However, when there are situations where an animal and plant is endangered or threatened and need urgent measure to save it from extinction, ex-situ conservation is the desirable approach.(vi) In ex-situ conservation threatened animals and plants are taken out from natural habitat and placed in special place where they can be protected and given special care. Zoological park, botanical garden and wildlife safari park serve these purpose.Q.5. Define a taxon. What is meant by the taxonomic hierarchy? Give a flow diagram from the lowest to the highest category for a plant and an animal. What happens to the number of individuals and number of shared characters as we go up the taxonomical hierarchy? Ans. A taxon is a taxonomic group of plants and animals with similar traits of any ranking. These taxonomic groups/categories are distinct biological entities and not merely morphological aggregates.

Q.6. A student of taxonomy was puzzled when told by his professor to look for a key to identify a plant. He went to his friend to clarify what ‘Key’ the professor was referring to? What would the friend explain to him?Ans. In reference to this question, ‘Key’ stands for taxonomic keys. Key is the taxonomical aid used for identification of plants and animals based on the similarities and dissimilarities. The keys are based on the contrasting characters generally in a pair called a couplet. It represents the choice made between two opposite options. This results in the acceptance of only one and the rejection of the other.Each statement in the key is called a lead. Separate taxonomic keys are required for each taxonomic category such as family, genus and species for identification purposes. Keys are generally analytical in nature.Q.7. Metabolism is a defining feature of all living organisms without exception. Isolated metabolic reactions in vitro are not living things but surely living reactions. Comment.Ans. All living organisms are made of chemicals.(i) There are thousands of metabolic reactions occurring simultaneously inside all living organisms, be they are unicellular or multicellular. The sum total of all the chemical reactions occurring in our body is metabolism. All plants, animals, fungi and microbes exhibit metabolism.(ii) No non-living objects exhibit metabolism. Metabolic reactions can be demonstrated outside the body in a cell-free system. An isolated metabolic reaction(s) outside the body of an organism, performed in a test tube is neither living nor non-living.Hence, while metabolism is a defining feature of all living organisms without exception, isolated metabolic reactions in vitro are not living things but surely living reactions.Q.8. Do you consider a person in coma-living or dead?Ans. A human being is the only organism who is aware of himself, i.e. has self-consciousness. We sense our environment through our sense organs (like ear, nose, eye, etc.). When it comes to human beings, it is all the more difficult to define the living state.We observe patients lying in coma in hospitals virtually supported by machines which replace the heart and lungs. The patient is otherwise brain- dead. The patient has no self-consciousness. So on this basis, the person is considered as dead, but there are thousands of metabolic reactions occurring in the body, hence on the basis of metabolism the person is considered as living. So we can say that the person that lying in coma is neither living nor dead.Q.9. What is the similarity and dissimilarity between “whole moong daal” and “broken moong daal” in terms of respiration and growth? Based on these parameters, classify them into living or nonliving?Ans. Whole moong daal has intact embryo which respire at slow rate during dormancy phase. When whole moong daal absorbs water, it resumes growth and germinate to form a new plant.Broken moong daal does not have an intact embryo, so it cannot respire and cannot germinate/grow. As whole moong daal can grow hence, it is living while broken moong daal cannot grow hence non-living.Q.10. Some of the properties of tissues are not the constituents of its cells. Give three examples to support the statement.Ans. (i) Bone is a specialised connective tissue which is made up of osteocytes (bone cells). Bones provide mechanical support which is not provided by osteocytes.(ii) Dry surface of the skin is a compound epithelium tissue that is made up of epithelial cells. Epithelial tissue protects the skin from chemical and mechanical stresses while this property is not found in epithelial cells.(iii) Blood is a specialized connective tissue which is made up of RBCs, WBCs and Platelets. Blood helps in the transport of nutrients inside the body while blood cells do not play a role in the transport of nutrients.

The document NCERT Exemplars: The Living World - 2 Notes | Study Biology Class 11 - NEET is a part of the NEET Course Biology Class 11.
All you need of NEET at this link: NEET
Join Course