The document NCERT Solution (Part - 1) - Accounting for Share Capital Commerce Notes | EduRev is a part of the Commerce Course Accountancy Class 12.
All you need of Commerce at this link: Commerce

Question 5:  What do you mean by a listed company?Answer: Those public companies whose shares are listed and can be traded in a recognised stock exchange for public trading like, Tata Motors, Reliance, etc are called Listed Company. These companies are also called Quota Companies. The listing of securities (shares) helps the investor to determine the increase/decrease in value of their investment in a concerned listed company. This provides ample indication to the potential investors about the goodwill of the company and facilitates them to take various investment decisions and also to assess the viability of their investment in a company.

Long Answers:Question 1 : What is meant by the word 'Company'? Describe its characteristics.Answer : The Section 3 (1) (i) of the Company Act of 1956 defines an organisation as a company that is formed and registered under the Act or any existing company that is formed and registered under any earlier company laws. In general, a company is an artificial person, created by law that has a separate legal entity, perpetual succession, common seal and has limited liability. It is a voluntary association of person who together contributes in the capital of the company to do business. Generally, the capital of a company is divided into small parts known as shares, the ownership of which is transferable subject to certain terms and conditions. There are two types of company, public company and private company.

1. Association of Person: A company is formed voluntarily by a group of persons to perform a common business. Minimum number of person should be two for formation of a private company and seven for a public company.

2. Artificial Person: Company is an artificial and juristic person that is created by law.

3. Separate Legal Entity: A company has a separate legal entity from its members (shareholders) and Directors. It can open a bank account, sign a contract and can own a property in its own name.

6. Common Seal: The Company is an artificial person and has no physical existence; hence it cannot put its signature. Thus, the Common Seal acts as an official signature of a company that validates the official documents.

Question 3: What do you mean by the term 'share'? Discuss the type of shares, which can be issued under the Companies Act, 1956 as amended to date.Answer : The total capital of a company is divided into equal units of small denomination termed as shares. The ownership of these shares is easily transferable, from one person to other, subject to certain conditions. The person who is contributing in the capital in the form of shares is known as shareholder. The ownership of a shareholder is limited to the value of the shares held by him/her.Types of SharesAs per the Section 86 of the Company Act of 1956, there are two types of shares- Preference Shares and Equity Shares (also known as Ordinary Shares)i) Preference Shares: Section 85 of the Company Act,1956 defines Preference Shares to be featured by the following rights:a. Preference Shares entitle its holder the right to receive dividend at a fixed rate or fixed amount.b. Preference Shares entitle its holder the preferential right to receive repayment of capital invested by them before their equity counterparts at the time of winding up of the company.ii) Equity Shares: Equity Shareholders have a voting right and control the affairs of a company. As per Section 85 (2) of Companies Act 1956; equity share is a share that is not a preference share. It does not possess any preferential right of payment of dividend or repayment of capital. The rate of dividend is not fixed on equity shares and varies from year to year, depending upon the amount of profit available for distribution after paying dividend to the preference shareholders. 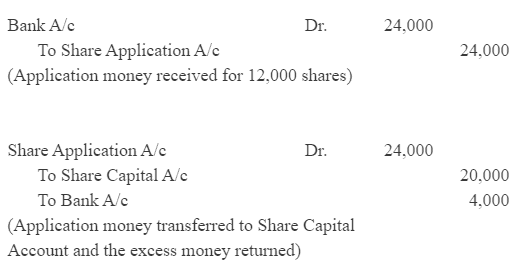 ii) Pro rata BasisThe company can allot shares on pro rata basis to all the share applicants. The excess amount received in the application is adjusted on the allotment.

iii) Pro rata and refund of moneyIn this case, the company follows a combination of both the method. It may reject some share applications and may allot some applications on the pro rata basis. 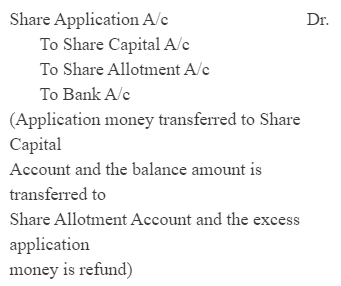 Example: Shares issued 10,000 @ Rs 10 per share and money received for 13,000 shares. Amount is payable Rs 2 on application, Rs 5 on allotment, Rs 3 on first and final call. If the company rejects the applications for 1,000 shares and allots the remaining on the pro rata basis.

Question 6 :  Describe the provision of law relating to 'Calls-in-Arrears' and 'Calls-in-Advance'.Answer : Calls-in-Arrears: When a shareholder fails to pay the amount due on allotment or any subsequent calls, then it is termed as Calls-in-Arrears. The Company is authorised by its Article of Association to charge interest at a specified rate on the amount of Call in Arrears from the due date till the date of payment. If the Article of Association is silent in this regard, then Table A shall be applicable that is interest at 5% p.a. is charged from the shareholders. As per the Revised Schedule VI of the Companies Act, Calls-in-Arrears are deducted from the Called-up Share Capital in the Notes to Accounts (that is prepared outside the Balance Sheet) under the head 'Share Capital'. The final amount of Share Capital is shown on the Equity and Liabilities side of the Company's Balance Sheet. The company can also forfeit the shares on account of nonpayment of the calls money after giving proper notice to the shareholders.Example- X Ltd. issued 12,000 shares of Rs 10 each. All the shares were duly subscribed, however, the first and final call of Rs 4 on 5,000 shares remained unpaid. 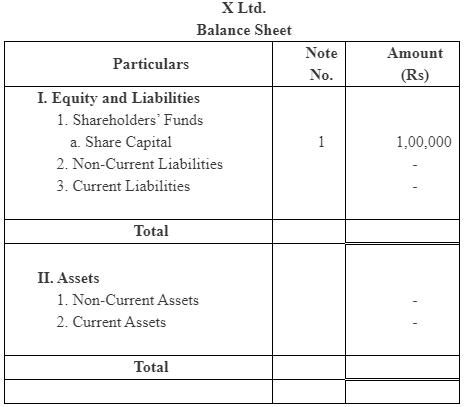 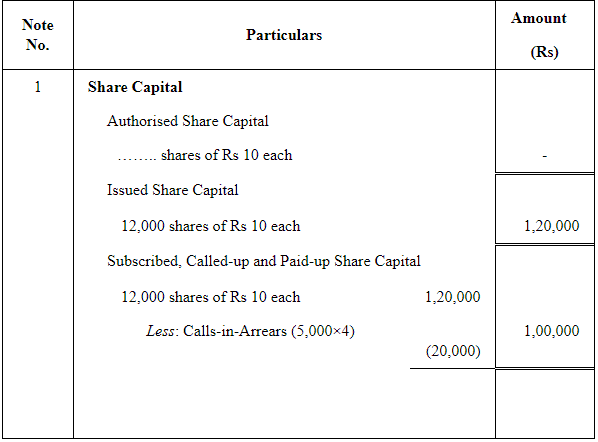 Calls-in-Advance: When a shareholder pays the whole amount or a part of the amount in advance, i.e. before the company calls, then it is termed as Calls-in-Advance. The company is authorised by its Article of Association to pay interest at the specified rate on call in advance from the date of payment till the date of call made. If the Article of Association is silent in this regard, then the Table A shall be applicable that is, interest at 6% p.a. is provided to the shareholders. As per the Revised Schedule VI of the Companies Act, Calls-in-Advance (along with interest on it) is added to the 'Other Current Liabilities' in the Notes to Accounts. The final amount of Other Current Liabilities is shown under the main head of 'Current Liabilities' on the Equity and Liabilities side of the Company's Balance Sheet.

Example- X Ltd. issued 12,000 shares of Rs 10 each. All the shares were duly subscribed. The final call of Rs 3 was not yet made, however, a shareholder holding 5,000 shares paid the final call installment in advance along with the allotment money.

Question 7 :  What is buy-back of shares?
Answer : Buy-back of shares means repurchasing of its own shares by a company from the market for reducing the number of shares in the open market. As per the Section 77A, 77AA and 77B of the Company Act of 1956, a company can Buy-back its own shares and debentures on the account of following reasons:1. To improve EPS (Earnings Per Share)2. To return surplus cash to the shareholders that is not required by the business3. To support value of its shares4. To facilitate capital restructuring of the company.5. To prevent take-over bid. 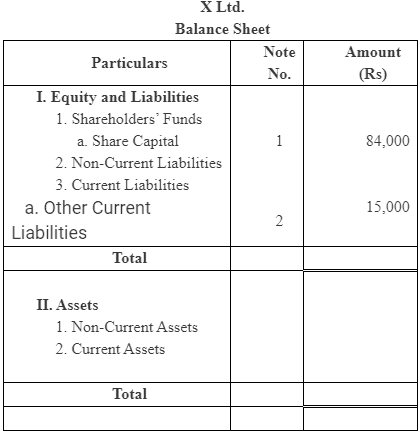