The document NCERT Solution - Chapter 5 : Bank Reconciliation Statement(Part 2), Class 11, commerce | EduRev Notes is a part of the Commerce Course Accountancy Class 11.
All you need of Commerce at this link: Commerce

Question 6: Prepare bank reconciliation statement as on December 31, 2017. On this day the passbook of Mr. Himanshu showed a balance of Rs 7,000. Page No 183:
Question 7: From the following particulars prepare a bank reconciliation statement showing the balance as per cash book on December 31, 2016. (a) Two cheques of Rs 2,000 and Rs 5,000 were paid into bank in October, 2016 but were not credited by the bank in the month of December.(b) A cheque of Rs 800 which was received from a customer was entered in the bank column of the cash book in December 2016 but was omitted to be banked in December, 2016.(c) Cheques for Rs 10,000 were issued into bank in November 2016 but not credited by the bank on December 31, 2016.(d) Interest on investment Rs 1,000 collected by bank appeared in the passbook.Balance as per Passbook was Rs 50,000 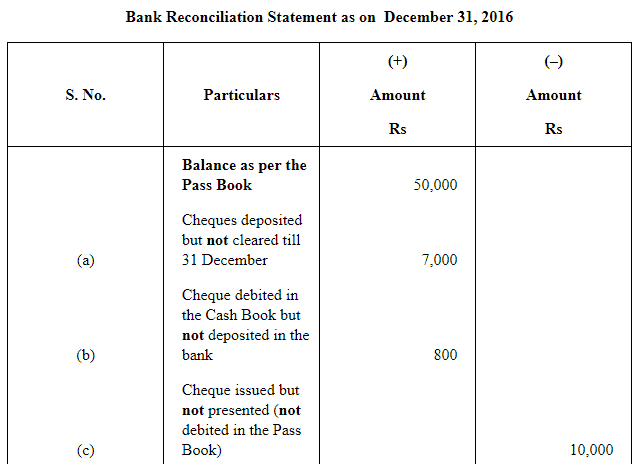 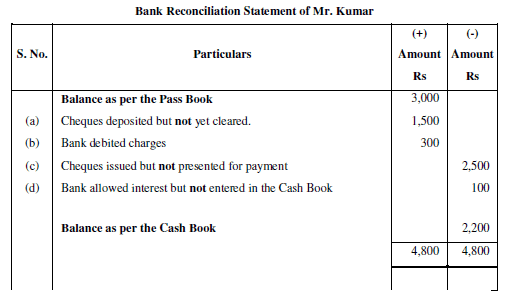 Question 9 : The passbook of Mr. Mohit current account showed a credit Balance of Rs 20,000 on dated  December 31, 2016. Prepare a Bank Reconciliation Statement with the following information.(i) A cheque of Rs 400 drawn on his saving account has been shown on current account.(ii) He issued two cheques of Rs 300 and Rs 500 on of December 25, but only the Ist cheque was presented(iii) One cheque issued by Mr. Mohit of Rs 500 on December 25, but it was not presented for payment where twice in the cash book.Answer : 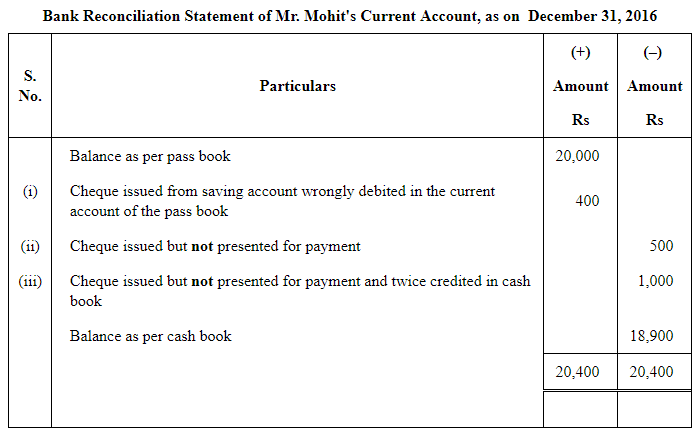 Page No 184:
Question 10: On Ist January 2017, Rakesh had an overdraft of Rs 8,000 as showed by his cash book. Cheques amounting to Rs 2,000 had been paid in by him but were not collected by the bank by January 01, 2017. He issued cheques of Rs 800 which were not presented to the bank for payment up to that day. There was a debit in his passbook of Rs 60 for interest and Rs 100 for bank charges. Prepare bank reconciliation statement for comparing both the balance.
ANSWER: 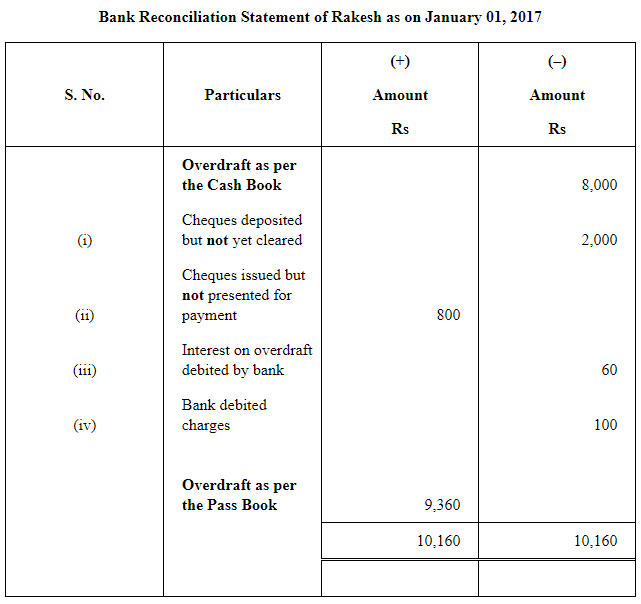 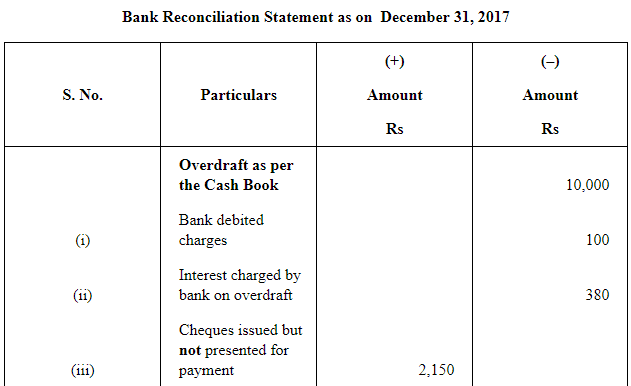 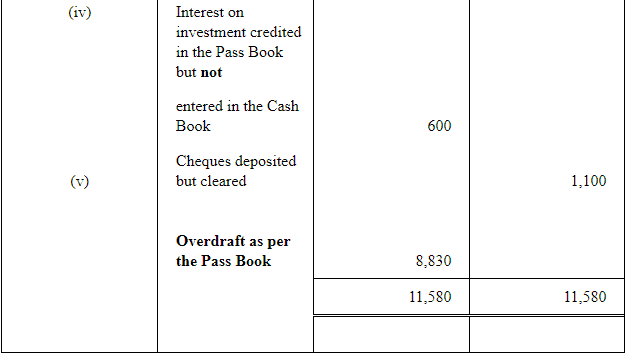 Question 12: Kumar find that the bank balance shown by his cash book on December 31, 2017 is Rs 90,600 (Credit) but the passbook shows a difference due to the following reason:A cheque (post dated) for Rs 1,000 has been debited in the bank column of the cash book but not presented for payment. Also, a cheque for Rs 8,000 drawn in favour of Manohar has not yet been presented for payment. Cheques totaling Rs 1,500 deposited in the bank have not yet been collected and cheque for Rs 5,000 has been dishonoured.
ANSWER: 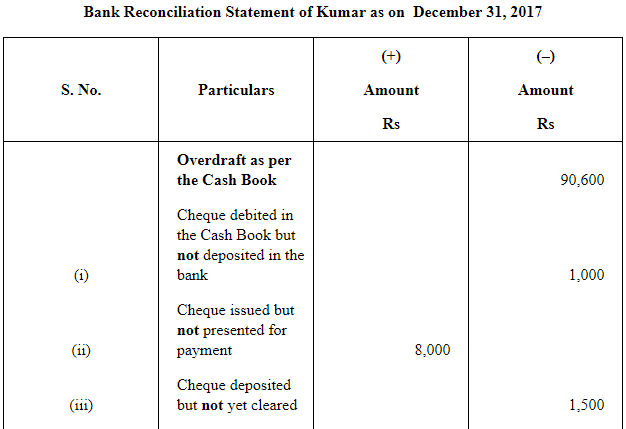 Question 13: On December 31, 2017, the cash book of Mittal Bros. Showed an overdraft of Rs 6,920. From the following particulars prepare a Bank Reconciliation Statement and ascertain the balance as per passbook. 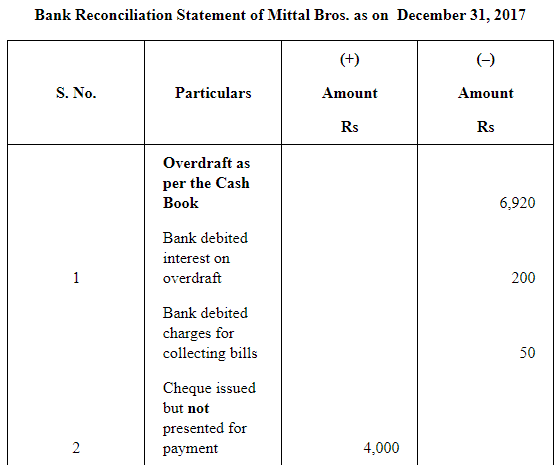 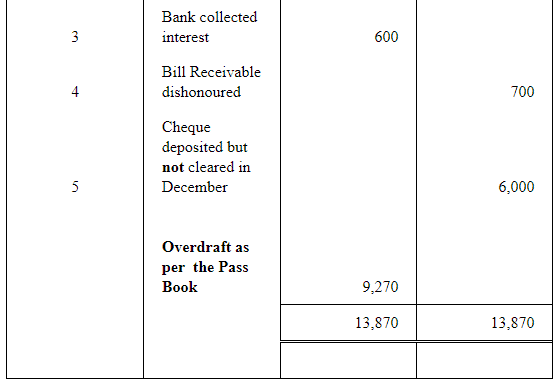 Page No 185:
Question 14: Prepare bank reconciliation statement of Shri Bhandari as on December 31, 2017
(i) The Payment of a cheque for Rs 550 was recorded twice in the passbook.
(ii) Withdrawal column of the passbook under cast by Rs 200
(iii) Cheque of Rs 200 has been debited in the bank column of the Cash Book but it was not sent to bank at all.
(iv) A Cheque of Rs 300 debited to Bank column of the cash book was not sent to the bank.(v) Rs 500 in respect of dishonoured cheque were entered in the passbook but not in the cash book. Overdraft as per passbook is Rs 20,000.
ANSWER: 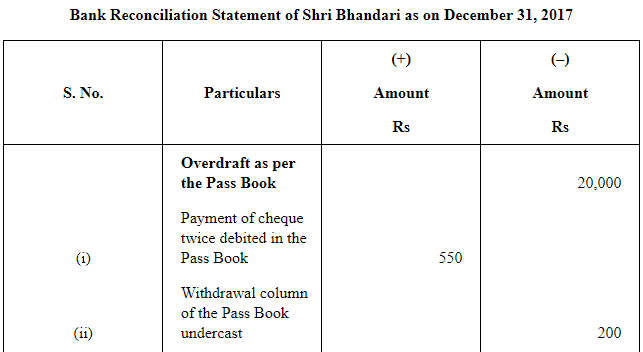 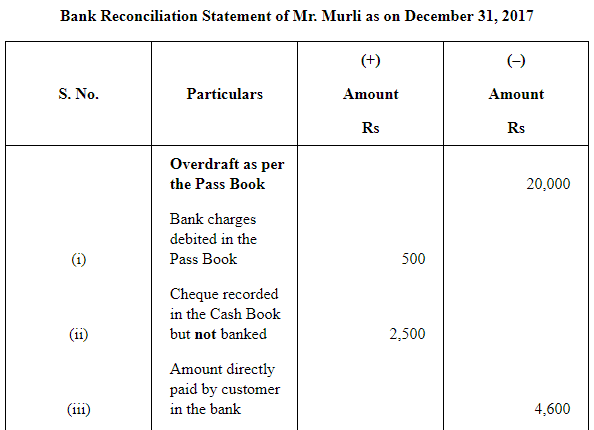 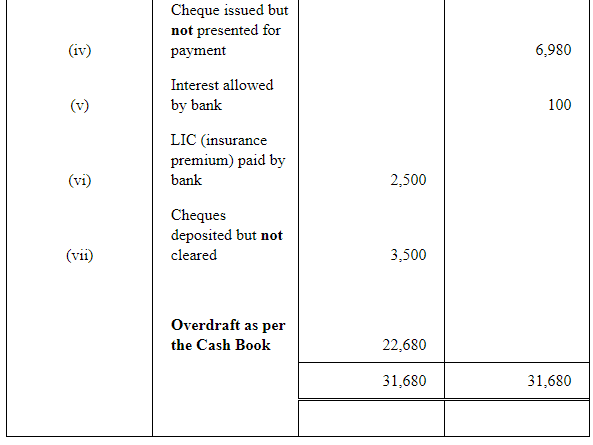 Question 16: Raghav & Co. have two bank accounts. Account No. I and Account No. II. From the following particulars relating to Account No. I, find out the balance on that account of December 31, 2017 according to the cash book of the firm. 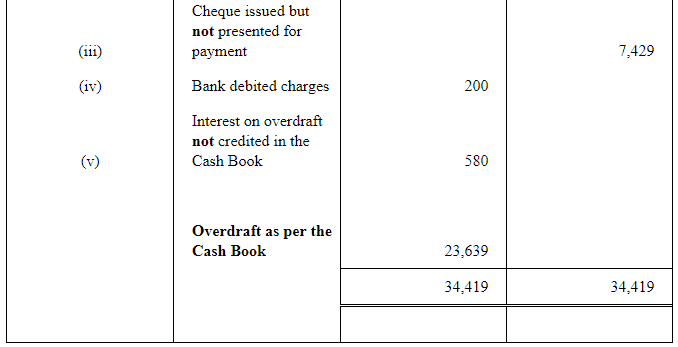 Question 17: Prepare a bank reconciliation statement from the following particulars and show the balance as per cash book. 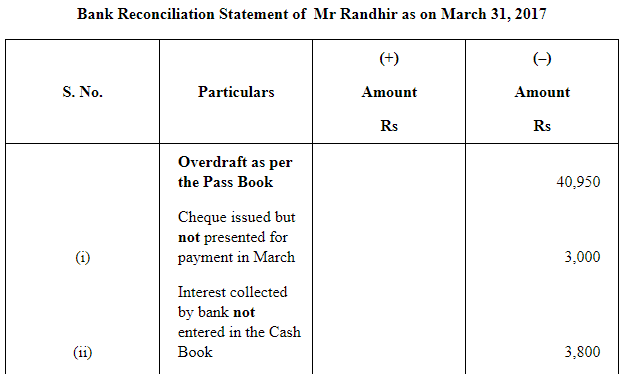