The document NCERT Solutions: Soil Notes | Study Science Class 7 - Class 7 is a part of the Class 7 Course Science Class 7.
All you need of Class 7 at this link: Class 7

Tick the most suitable answer in questions 1 and 2.

Ques1:  In addition to the rock particles, the soil contains

(i) air and water

Ques2: The water holding capacity is the highest in

(iv) mixture of sand and loam

Ques4: Explain how soil is formed.

Ans: Soil is formed by the process of weathering. The breaking down of rocks because of the action of wind, rain, ice, etc. is called weathering.

Ques5: How is clayey soil useful for crops?

Ans: Clayey soil can retain much water and consequently contains lot of moisture even in summer. That’s why it is most useful for crops like paddy which requires lot of water. Clayey soil is useful for wheat also.

Ques6: List the differences between clayey soil and sandy soil.

Ques7: Sketch the cross section of soil and label the various layers. 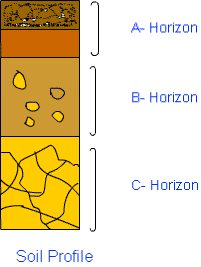 Ques9: Explain how soil pollution and soil erosion could be prevented.

Use of manure instead of synthetic fertilization.

Use of natural pesticides.

Ques10: Solve the following crossword puzzle with the clues given:

5. Use should be banned to avoid soil pollution.

7. Living organism in the soil.

1. In desert soil erosion occurs through.

4. This type of soil can hold very little water.

5. Collective name for layers of soil. 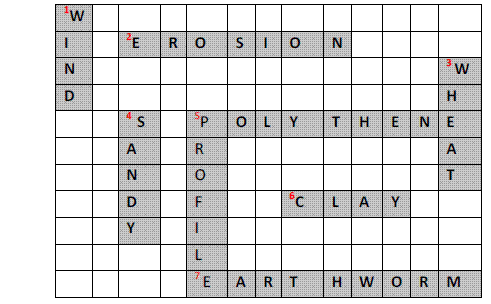 The document NCERT Solutions: Soil Notes | Study Science Class 7 - Class 7 is a part of the Class 7 Course Science Class 7.
All you need of Class 7 at this link: Class 7