The document NCERT Solution - Children at Work Notes | Study English Class 8 - Class 8 is a part of the Class 8 Course English Class 8.
All you need of Class 8 at this link: Class 8

Ques 1: Velu stood on the platform but he felt “as if he was still on a moving train”. Why?

Ques 2: What made him feel miserable?

Velu felt miserable and exhausted because he had run away from his village two days ago and had not eaten anything except some peanuts and a piece of jaggery for the last two days.

Ques 3: (i) Velu traveled without a ticket. Why?

(ii) How did he escape the ticket collector’s attention?

(i) Velu traveled without a ticket because he had no money to buy a ticket.

Ques 4: Why had Velu run away from home?

Velu had run away from home because his father used to beat him every day. His father would also spend the money earned by Velu and his sisters on drinking.

Ques 5: Why did he decide to follow the ‘strange’ girl?

He decided to follow the ‘strange’ girl because he did not know where to go and what to do.

Ques 1: Can Velu read Tamil and English? How do you know?

Velu can only read Tamil but not English. He failed to read the signboards in English. However, he can read front. Velu read the Tamil sign, Central Jail.

Ques 2: “If you are not careful, you will soon be counting bars there,” the girl said.

(i) What is she referring to?

(ii) What does she mean when she says “If you are not careful…”? (She says something a little later which means the same. Find that sentence.)

(i) She was referring to the Central Jail.

(ii) When she said “If you are not careful…” to Velu, she meant that he should not get caught. All he had to do to stay away from jail was to not do something stupid and get caught by policemen. 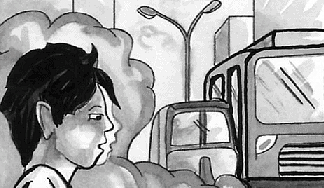 (ii) What did they get to eat?

(i) The Girl led Velu to the back of a wedding hall.

(ii) Velu got a banana and a vada, while the girl got only one banana to eat.

Ques 4: What work did she do? Think of a one-word Ans.

Ques 1: (i) What material is the ‘strange’ huts made out of?

(ii) Why does Velu find them strange?

(i) The ‘strange’ huts were made out of metal sheets, tires, bricks, wood, and plastic.

(ii) Velu found the huts strange because in his village, the houses were made of mud and palm leaves. The huts he saw were made up of all sorts of things and looked like they could fall at any moment.

Ques 2: What sort of things did Jaya and children like her collect and what did they do with those things?

Jaya and children like her collected paper, plastic, glass, and other such things. They sold these items to Jam Bazaar Jaggu, who further sold it to a factory.

Ques 3: Is Velu happy or unhappy to find work? Give a reason for your Ans.

Velu was unhappy to find work because he had not run away from home to dig through garbage bins. The only work he had ever done was weeding and taking cows out to graze. However, since he did not know Chennai too well, he decided to work as a rag picker till the time he found a better job.

Ques 1: Is Velu a smart boy? Which instances in the text show that he is or isn’t?

Yes, Velu seems to be a smart boy.  He makes the determination to leave his village and could stand his father’s beating. When he reached Chennai, the girl, who was a rag picker, tried to help him. Initially, he thought of not taking her help. However, he was smart enough to realize that he was very hungry and did not know where to go.

Therefore, he followed the girl. He knew how to read Tamil. When the girl told him to eat the banana that she found in the garbage, he refused at first. However, the Ques quickly realized that he was very hungry and therefore, ate it.

Even though he found the place and even the girl very strange, he continued to walk along with her. He tried to understand why she collected rubbish. He knew that he had not come to the big city to collect rubbish; however, he adjusted to the circumstances and decided to do the same work till he found a better job. 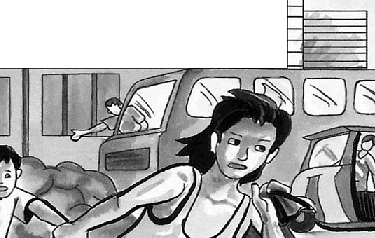 Ques 2: Do you think Jaya is a brave and sensitive child with a sense of humor? Find instances of her courage, kind nature and humor in the text.

Jaya is a brave and sensitive child with a sense of humor. She was of Value age. She was a rag picker and knew how to live in the city. Jaya knew her way around Chennai, which is a fairly big city. She knew from where to find food. She knew that one has to be careful to not get caught by the police.

Jaya was also a very sensitive and kind girl as she helped Velu in all possible ways. She gave him a pair of shoes because his feet burnt in burning sun on far road.

Jaya was also of a humorous nature. When she saw Velu sitting at the platform, she asked him if he was there to become rich. When Velu was not able to cross the road, she dragged him to the other side of the road and said “What do you think you’re doing? Grazing cows? If you stand around in the middle of the road like that, you’ll be chutney.”

Ques 3: What one throws away as waste may be valuable to others. Do you find this sentence meaningful in the context of this story? How?

Ans:Yes, this story shows that what one throws away as waste might be valuable to others. The empty bottles, paper and items of plastic are thrown out by the people. The rag pickers earn their living by collecting them. Those who store rubbish become very rich people for them. The waste is valuable and a blessing for them and their life depends upon it.

The document NCERT Solution - Children at Work Notes | Study English Class 8 - Class 8 is a part of the Class 8 Course English Class 8.
All you need of Class 8 at this link: Class 8