The document NCERT Solution - How the Camel Got His Hump Notes | Study English Class 8 - Class 8 is a part of the Class 8 Course English Class 8.
All you need of Class 8 at this link: Class 8 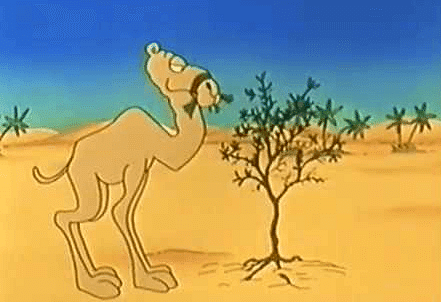 Q2. The camel said, “Humph” repeatedly. How did it affect him?Ans: When the camel said “Humph!” repeatedly despite the Djinn’s warning, his back puffed up into a big hump.

Q4. “…he has never yet learned to behave”. In light of this, what is the writer’s opinion about the camel?Ans: According to the writer, the camel is still a very lazy animal that is unwilling to work. After he got the hump, the Djinn asked him to go out of the desert to help the other three animals. It seems that the camel still did not behave himself and worked lazily in the desert itself. It is for this reason that he was still unable to complete the pending work of those three missed days; he continued carrying the hump and living in the desert.

Q1. Can this story be factually true?Ans: No, it is not a factually true story. It is an imaginative tale.Q2. What, according to you, is the story about? Consider the following:(i) How the world began.(ii) Why everyone should do his/her share of work seriously.(iii) How animals are important to humans.(iv) How the camel got his hump.Ans: (iv) How the camel got his hump.Q3. What did you do over the weekend? Were you generally active or idle? Please check your back before starting to discuss or answer the question.Ans: The last weekend I woke up at 8 A.M. and did some physical exercise in the morning. I helped my mother in doing the household chores. By evening I played badminton with my sister. Overall, I spent my weekend in an active manner. Yes, I have checked my back and there is no hump.Q4. There are broadly two categories of workers – those who prefer to do today what they can do tomorrow, and those who prefer to do tomorrow what they can do today. Where do you belong?Ans: I belong to the first category of workers, i.e. those who prefer to do today what they can do tomorrow. This implies that I prefer doling my work promptly on time rather than unnecessarily piling it up for the future.

The document NCERT Solution - How the Camel Got His Hump Notes | Study English Class 8 - Class 8 is a part of the Class 8 Course English Class 8.
All you need of Class 8 at this link: Class 8