The document NCERT Solutions: Nutrition in Animals Notes | Study Science Class 7 - Class 7 is a part of the Class 7 Course Science Class 7.
All you need of Class 7 at this link: Class 7

(a) Digestion of starch starts in the stomach.Ans: False

(b) The tongue helps in mixing food with saliva.Ans: True

(d) The ruminants bring back swallowed grass into their mouth and chew it for some time.Ans: True

Q.3. Tick (√) mark the correct answer in each of the following.a. Fat is completely digested in the(a) Stomach(b) Mouth(c) Small intestine(d) Large intestine

Q5. What are villi? What are their location and function?Ans: Villi is the finger-like projections. These are found in the inner walls of small intestine. It helps in absorption of the digested food. 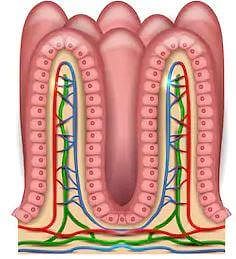 Q6. Where is the bile produced? Which component of the food does it digest?Ans: Bile is produced in the liver. Bile helps in digestion of fats.

Q7. Name the type of carbohydrate that can be digested by ruminants but not by humans. Give the reason also.Ans: Cellulose is the type of carbohydrates which is digested in ruminants but not in humans. Ruminants have a large sac–like structure between the small intestine and large intestine, in which cellulose of the food is digested by the action of certain bacteria. Such structure is not present in humans. Hence humans cannot digest cellulose while ruminants can.

Q8. Why do we get instant energy from glucose?Ans: Glucose is a simple sugar so there is no need for digestion. It directly reaches the cells where it gives energy after respiration.

Q.9. Which part of the digestive canal is involved in:

(e) Formation of faeces _________.Ans: Formation of faeces -  Large Intestine .Q10. Write one similarity and one difference between the nutrition in amoeba and human beings.Ans:Similarity: Both Amoeba and human have holozoic type of nutrition.Difference: Human beings have complex structure for the ingestion, digestion and egestion of food while Amoeba has simple process in which it engulfs the with the help of pseudopodia and food get trapped in food vacuoles.Q11. Match the following column 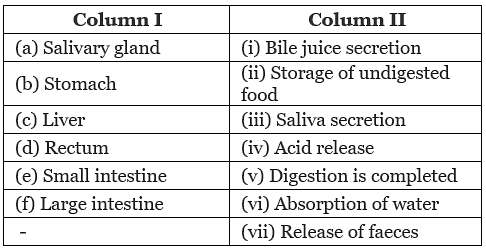 Q12. Label the diagram of the digestive system. 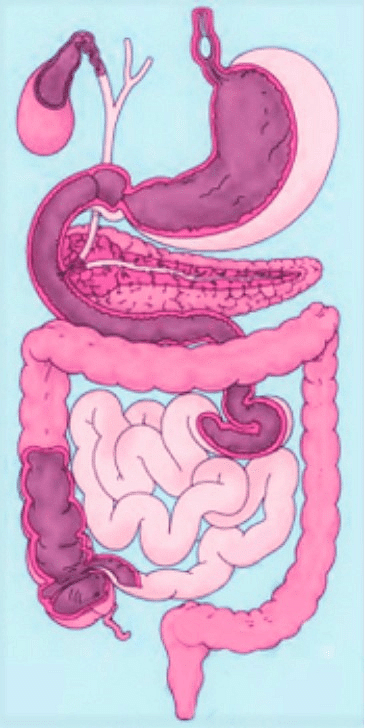 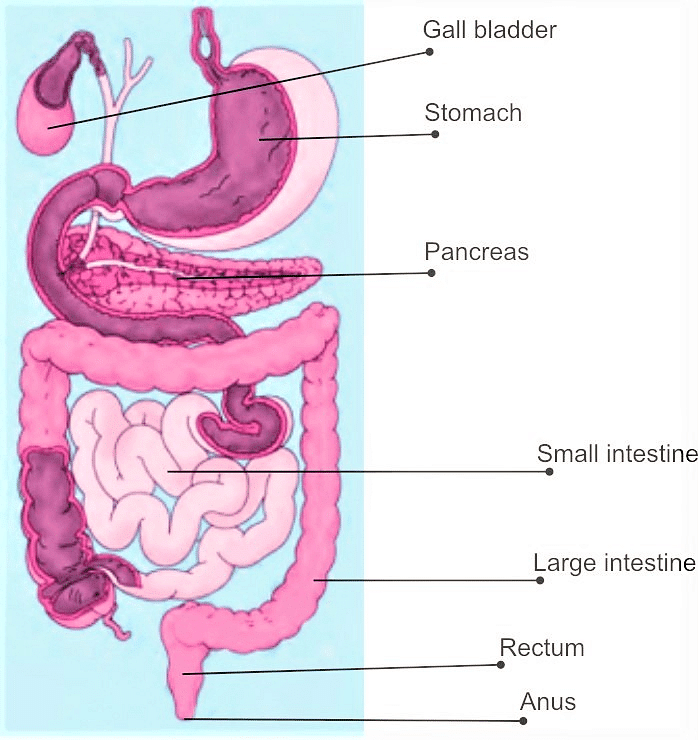 The document NCERT Solutions: Nutrition in Animals Notes | Study Science Class 7 - Class 7 is a part of the Class 7 Course Science Class 7.
All you need of Class 7 at this link: Class 7