Q1. Every village in India is surveyed once in ten years during the Census and some of the details are presented in the following format. Fill up the following based on information on Palampur. 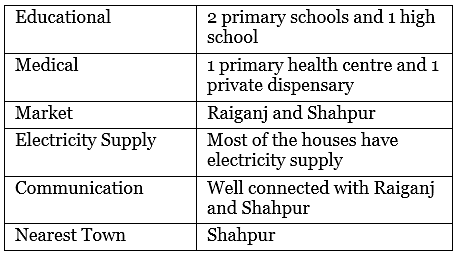 Q2. Modern farming methods require more inputs which are manufactured in industry. Do you agree?Ans:

Q3. How did the spread of electricity help farmers in Palampur?

Ans: The spread of electricity helped the farmers in Palampur in the following ways:

Q4. Is it important to increase the area under irrigation? Why?

Q7. In your region, talk to two labourers. Choose either farm labourers or labourers working at construction sites. What wages do they get? Are they paid in cash or kind? Do they get work regularly? Are they in debt?Ans:

Q10. How do the medium and large farmers obtain capital for farming? How is it different from the small farmers?Ans:

The bank could have provided her loan at a low rate of interest. In addition, she would have devoted more time to her own field of 1 hectare, instead of working as a farm labourer for Tejpal Singh.Q12. Talk to some old residents in your region and write a short report on the changes in irrigation and changes in production methods during the last 30 years.Ans: (a)

Q13. What are the non-farm production activities taking place in your region? Make a shortlist.Ans: