NCERT Solutions - Chapter 6 : Human ResourcesQ 1. Answer the following questions. (i) Why are people considered a resource?Answer: People are considered a resource because with their demands and capabilities they can create new resources. Nature’s bounty becomes important only when people find it and make it useful for them. Hence, human resource is also considered an important and potential resource for the society.

Fig: Human as a resource.

(ii) What are the causes for the uneven distribution of population in the world?Answer: The distribution of population in the world is uneven - some areas are very crowded while some are sparsely populated. There are various reasons behind uneven distribution:→ Geographical factors: Favourable topography, availability of mineral and fresh water resources, favourable climate and soil fertility are some of the reasons affecting population distribution e.g., Indo Gangetic Plains, Diamond Mines of South Africa etc are densely populated.→ Social and Cultural factors: Areas of better housing, education and health facilities are more populated. Places of religious and cultural significance also attract people e.g., Varanasi, Jerusalem etc.→ Economic factors: Places having more industries, transportation and communication facilities provide better employment opportunities. People are attracted to these places because of the above reasons e.g., Mumbai, Osaka etc.(iii) The world population has grown very rapidly. Why?Answer: The world population has grown very rapidly because the death rate has gone down as a result of the growth of food supplies and the improvement of medical facilities. Also, unlike the death rate, the birth rate has remained quite high.(iv) Discuss the role of any two factors influencing population change.Answer: The birth rate and the death rate are two factors that influence population change. The birth rate is the number of live births per 1000 people while the death rate is the number of deaths per 1000 people. These are the natural causes of population change. When the birth rate is higher than the death rate, population increases. When the death rate is more than the birth rate, population decreases. When the two rates are equal, the population remains constant. Thus, the birth and death rates affect the balance of population. 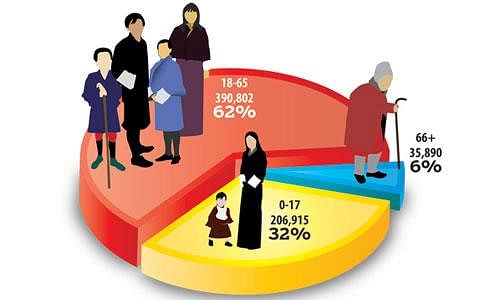 (b) When the population density of an area is so high that people live in tall buildings.(c) Pattern of population► (a) A graphical presentation of the age, sex composition of a population.