The document NCERT Solutions - Determination of Income and Employmenta Commerce Notes | EduRev is a part of the UPSC Course NCERT Hindi Textbooks (Class 6 to Class 12).
All you need of UPSC at this link: UPSC 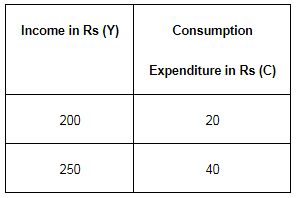 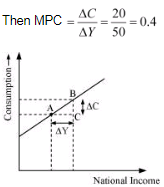 The relationship between MPC and MPS can be explained as −Y = C + S (Assuming that the income earned is either consumed or saved)
Or, ΔY = ΔC + ΔSDividing both sides by ΔY

Or, 1 = MPC + MPSOr, MPC = 1 − MPSOr, MPS = 1 − MPCSo, the sum of MPC and MPS is always equal to unity.Question 2: What is the difference between ex ante investment and ex post investment?Answer: 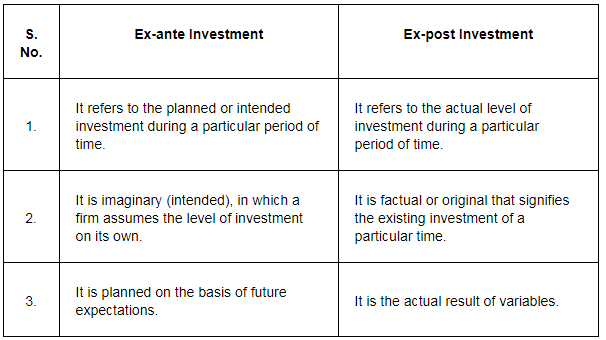 Question 3: What do you understand by ‘parametric shift of a line’? How does a line shift when its(i) slope decreases, and(ii) its intercept increases?Answer: Considering the equation of a straight line asb = ma + εWhere m = slope of straight line, m > 0ε = intercept on vertical axis, ε> 0Also, when a increases by 1 unit, the value of b increases by m units.The parameters εand m are parameters of a graph.As the value of m increases, the straight line rotates upward around the same vertical intercept. This movement is an example of parametric shift of the graph.(i) A straight line rotates downward around the same vertical intercept as its slope decreases.(ii) A straight line shifts parallelly upward when its intercept increases.Question 4: What is ‘effective demand’? How will you derive the autonomous expenditure multiplier when price of final goods and the rate of interest are given?Answer: Effective demand refers to a situation in which equilibrium output is determined solely by the level of aggregate demand. This is because of the assumption that the supply is infinitely elastic and if there exists any inequality between the Aggregate Demand (AD) and the Aggregate Supply (AS), then the equilibrium output will only be influenced by AD. The concept of effective demand can be explained with the help of the given diagram. 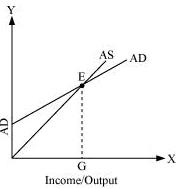 The x-axis represents income/output level and y-axis represents the level of aggregate demand. E is the equilibrium point where the two curves AS and AD meet. EG is the effective demand and output level is determined by AD (assuming the elasticity of supply to be perfectly elastic).Autonomous expenditure multiplier is derived asY = AD (at equilibrium)Y = A + cY [Where AD = A + cY]Y − cY = AY (1 − c) = A

autonomous expenditure multiplierSo, the autonomous expenditure multiplier is dependent on the income and MPC.Question 5: Measure the level of ex-ante aggregate demand when autonomous investment and consumption expenditure (A) is Rs 50 crores, and MPS is 0.2 and level of income (Y) is Rs 4000 crores. State whether the economy is in equilibrium or not (cite reasons).Answer: Consumption expenditure (A) = Rs 50 CroresMPS = 0.2So, MPC = 1 − MPS= 1 − 0.2= 0.8Y = 4000 CroresWe know that AD = A + cY (1)Putting the values in equation (1)AD = 50 + 0.8 × 4000= 50 + 3200= Rs 3250 CroresBut, Rs 3250 < Rs 4000Implies that AD < YHence, the economy is not in equilibrium.Question 6: Explain ‘Paradox of Thrift’.Answer: Paradox of thrift refers to a situation in which people tend to save more money, thereby leading to a fall in the savings of the economy as a whole. In other words, when everyone increases his/her saving-income proportion i.e. MPS (s), then, the aggregate demand will fall as consumption decreases. This will further lead to a decrease in employment and income level and finally this will reduce the total savings for the economy. This concept was suggested by Keynes wherein increased saving at individual levels will gradually lead to the slowdown of economy in terms of circular flow of income.