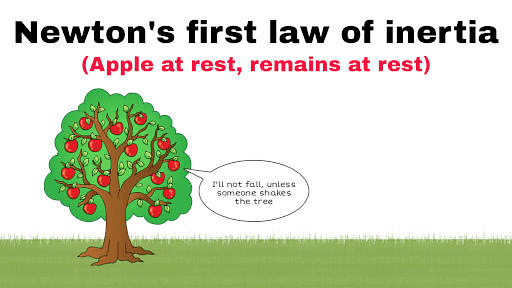 Q4. Why do you fall in the forward direction when a moving bus apply brakes to stop and fall back when it accelerates from rest?Ans:

Q1. If action is always equal to the reaction, explain how a horse can pull a cart.Ans:

Q2. Explain, why is it difficult for a fireman to hold a hosepipe, which ejects large amounts of water at high velocity.Ans:

Since the rifle was initially at rest, the initial momentum of the rifle = 0

Total momentum of the rifle and bullet after firing =m1v1 + m2v2

As per the law of conservation of momentum, the total momentum of the rifle and the bullet after firing = 0 (same as initial momentum)

Q1. An object experiences a net zero external unbalanced force. Is it possible for the object to be travelling with a non-zero velocity? If yes, state the conditions that must be placed on the magnitude and direction of the velocity. If no, provide a reason.Ans:

Q2. When a carpet is beaten with a stick, dust comes out of it. Explain.Ans: When the carpet is beaten, it is suddenly set into motion. The dust particles tend to remain at rest due to the inertia of rest, therefore, dust comes out of it.Q3. Why it is advised to tie any luggage kept on the roof of a bus with a rope?Ans: The luggage kept on the roof possesses inertia. As the bus moves, breaks to stop or takes a turn, the luggage might fall off. Thus, it should be tied with a rope.Q4. A batsman hits a cricket ball which then rolls on level ground. After covering a short distance, the ball comes to rest. The ball slows to a stop because (a) the batsman did not hit the ball hard enough.(b) velocity is proportional to the force exerted on the ball.(c) there is a force on the ball opposing the motion.(d) there is no unbalanced force on the ball, so the ball would want to come to rest.Ans: When the ball rolls on the flat surface of the ground, its motion is opposed by the force of friction (the friction arises between the ground and the ball). This frictional force eventually stops the ball. Therefore, the correct answer is (c).

If the surface of the level ground is lubricated (with oil or some other lubricant), the friction that arises between the ball and the ground will reduce, which will enable the ball to roll for a longer distance.

Where m is the mass of the train, it can be calculated as follows

(Negative sign indicates that the force is in a direction opposite to the motion of the vehicle.)

Q9. What is the momentum of an object of mass m, moving with a velocity v?(a) (mv)2 (b) mv2 (c) 1/2mv2 (d) mvAns: (d) mass x velocityQ10. Using a horizontal force of 200 N, we intend to move a wooden cabinet across a floor at a constant velocity. What is the friction force that will be exerted on the cabinet?Ans: Since the velocity of the cabinet is constant, its acceleration must be zero. Therefore, the effective force acting on it is also zero. This implies that the magnitude of opposing frictional force is equal to the force exerted on the cabinet, which is 200 N. Therefore, the total friction force is -200 N.Q11. Two objects, each of mass 1.5 kg, are moving in the same straight line but in opposite directions. The velocity of each object is 2.5 ms-1 before the collision during which they stick together. What will be the velocity of the combined object after the collision?Ans: 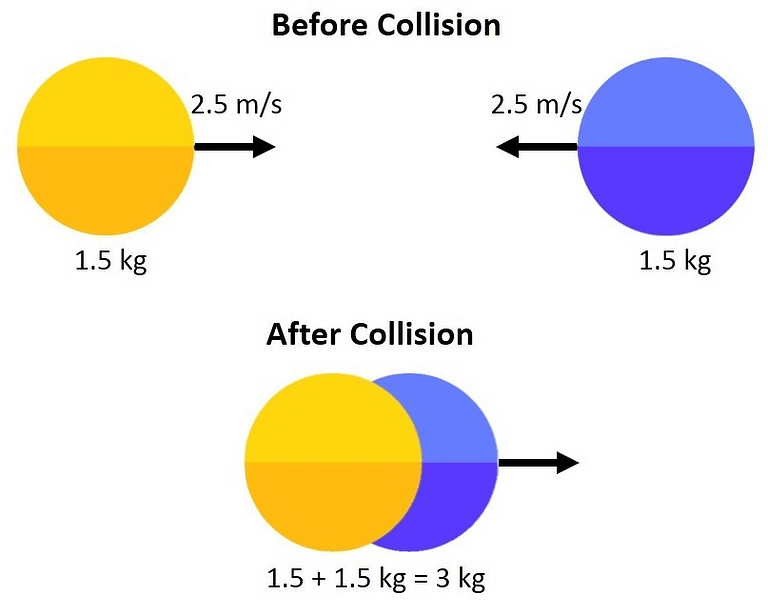 From the principle of conservation of momentum:

m1u1 + m2u2 = (m1 + m2) v⇒ 1.5 x 2.5 + 1.5 x (-2.5) = (3.0) v⇒ 0 = 3.0 vor v = 0 ms-1That is combined object comes to rest after collision.Q12. According to the third law of motion when we push on an object, the object pushes back on us with an equal and opposite force. If the object is a massive truck parked along the roadside, it will probably not move. A student justifies this by answering that the two opposite and equal force cancel each other Comment on this logic and explain why the truck does not move.Ans: The logic given by student is wrong; because the action and reaction forces do not act on same body; but act on different bodies.The reason for not moving the truck is as follows:

Q13. A hockey ball of mass 200 g travelling at 10 ms-1 is struck by a hockey stick so as to return it along its original path with a velocity at 5 ms-1. Calculate the change of momentum occurred in the motion of the hockey ball by the force applied by the hockey stick.Ans:

Akhtar’s assumption is partially right. Since the mass of the car is very high, the force exerted on the insect during the collision is also very high.

Q1. The following is the distance-time table of an object in motion time in seconds Distance in meters 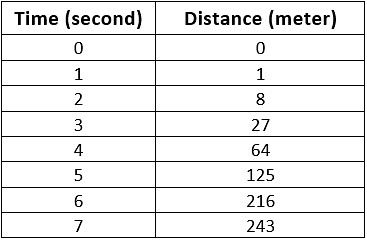 (b) Force, F = ma ⇒ F ∝ a. Since the mass of the object remains constant, the increasing acceleration implies that the force acting on the object is increasing as wellQ2. Two persons manage to push a motorcar of mass 1200 kg at a uniform velocity along a level road. The same motorcar can be pushed by three persons to produce an acceleration of 0.2 ms-2. With what force does each person push the motorcar? (Assume that all persons push the motorcar with the same muscular effort.)Ans: Mass of car, m = 1200 kgLet each person applies force F on the motor car. Thus, the force ‘2F applied by 2 persons balances the frictional fore due to ground force applied by three persons = 3FEffective force = 3F - friction = 3F - 2F = FThus force F produces an acceleration of 0.2 ms-2.F = ma = 1200 x 0.2 = 240 NThus, force applied by each person = 240 NQ3. A hammer of mass 500 g, moving at 50 ms-1, strikes a nail. The nail stops the hammer in a very short time of 0.01 s. What is the force of the nail on the hammer?Ans: