The document NCERT Solutions - Friction Class 8 Notes | EduRev is a part of the Class 8 Course NCERT Hindi Textbooks (Class 6 to Class 12).
All you need of Class 8 at this link: Class 8

(d) Sprinkling of powder on the carrom board ________ friction.Ans: Reduce

Q5. You spill a bucket of soapy water on a marble floor accidently. Would it make it easier or more difficult for you to walk on the floor? Why?Ans: Friction makes it possible for us to walk on the floor. If a bucket of soapy water spills on the floor, then the force of friction between the ground and feet will decrease. Hence, it would become more difficult to walk on the soapy floor.Q6. Explain why sportsmen use shoes with spikes.Ans: Shoes with spikes offer more friction because of more irregularities in the surface. This gives better grip to sportsmen while running.Q7. Iqbal has to push a lighter box and Seema has to push a similar heavier box on the same floor. Who will have to apply a larger force and why?Ans: Seema has to apply larger force, because friction increases with increase in weight. 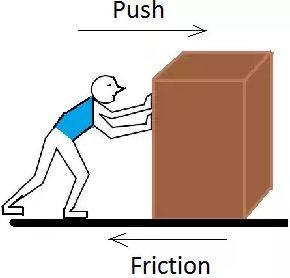