Q.3. In the following illustration, fill in each tier with the judgement given by the various courts in the Sudha Goel case. Check your responses with others in class.
Ans. Lower Court. The Lower Court convicted Laxman, his mother Shakuntala and his brother-in-law Subash Chandra and sentenced all three of them to death.
High Court. The High Court acquitted Laxman, Shakuntala and Subash Chandra.
Supreme Court. The Supreme Court founded Laxman and his mother guilty but acquitted the brother-inlaw Subash because they did not have enough evidence against him. The Supreme Court decided to send the accused to prison for life.

Q.4. Keeping the Sudha Goel case in mind, tick the sentences that are true and correct the ones that are false. (a) The accused took the case to the High Court because they were unhappy with the decision of the Trial Court. (b) They went to the High Court after the Supreme Court had given its decision. (c) If they do not like the Supreme Court verdict, the accused can go back again to the Trial Court.
Ans.(a)True (b) False (c) False

Q.8. Make sentences with each of the glossary words given in the textbook.
Ans. 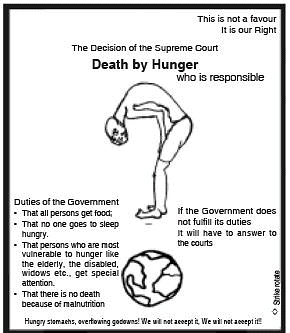 How does the phrase “Hungry stomachs, overflowing godowns! We will not accept it !!” used in the poster relate to the photo essay on the Right to Food on page 61?
Ans. The Contitution provides Right to Food under the Fundamental Rights. If this Right is hurt or affected by any reason, the government is solely liable for this. If one dies out of hunger, the government is responsible for it. Very recently we have seen cases of suicide by the farmers. The government has to check such happenings. Sometimes, traders cause such situations by hoardings. A crisis of food is created by these hoardings. The government must find out these hoarders and punish them.