The document NCERT Solutions: Matter In Our Surroundings Notes | Study Science Class 9 - Class 9 is a part of the Class 9 Course Science Class 9.
All you need of Class 9 at this link: Class 9

Q1. Which of the following is matter: Chair, air, love, smell, hate, almonds, thought, cold, cold drink, the smell of perfume.Ans: The matter is anything that occupies space, has mass and can be perceived by our senses. In the above question, Chair, air, almonds and cold-drink are matter. 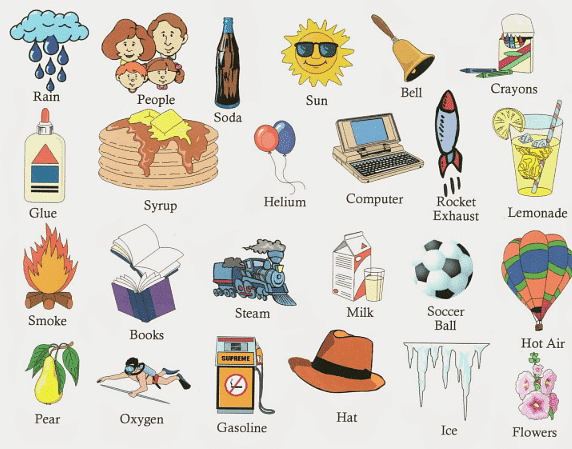 Q2. Give reasons for the following observation.The smell of hot sizzling food reaches you several meters away, but to get the smell from cold food, you have to go close.Ans: It is because at a higher temperature, the kinetic energy of the molecules is high and hence, the rate of diffusion is higher, while at a lower temperature, the rate of diffusion is low, hence one has to go close to get the smell of cold food.Q3. A diver is able to cut through water in a swimming pool. Which property of matter does this observation show?Ans: The particles of every matter have a force of attraction between them. This force keeps the particles together in a matter. In the case of water, the force of attraction between particles is less in comparison to solids. Thus, water molecules flow easily, giving way to a diver.

Q2. (a) Tabulate the differences in the characteristics of states of matter.(b) Comment upon the following: Rigidity, Compressibility, Fluidity, Filling a gas container, Shape, Kinetic energy, and Density.Ans: 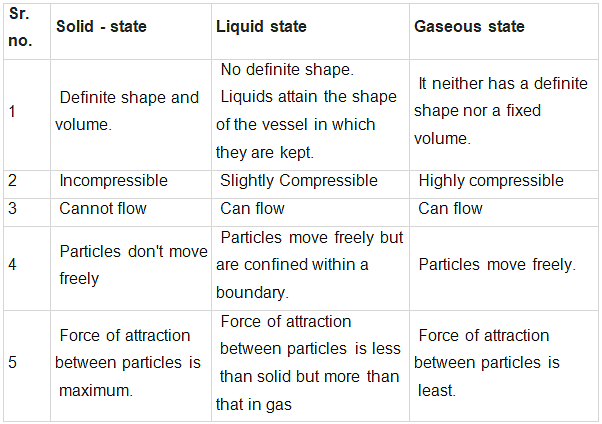 (a) At 250°C, the physical state of water is gas as the temperature is beyond its boiling point.(b) At 100°C, It is at the transition state as the water is at its boiling point. Hence it would be present in both liquid and gaseous state.Q3. For any substance, why does the temperature remain constant during the change of state?Ans: The temperature remains constant during the change of state because the heat supplied to the substance is used up in overcoming the intermolecular forces of attraction between the particles.Q4. Suggest a method to liquefy atmospheric gases.Ans: Atmospheric gases can be liquefied at low temperature and high pressure.

Q1. Why does a desert cooler cool better on a hot dry day?Ans: It is because the temperature is high and it is less humid on a hot dry day which enables better evaporation. High levels of this evaporation provide better cooling effects.Q2. How does water kept in an earthen pot (matka) become cool during summers?Ans: An earthen pot consists of many tiny pores through which liquid inside the pot evaporates. This makes the water inside the pot cool. In this way, water kept in an earthen pot becomes cool during summers.Q3. Why does our palm feel cold when we put some acetone or petrol or perfume on it?Ans: Acetone, petrol and perfume are highly volatile compounds. When we place them on our palm, they evaporate at a high rate and absorb heat from our palm; as a result, our palm feels cold.Q4. Why are we able to sip hot tea or milk faster from a saucer than a cup?Ans: A saucer has a larger surface area than a cup which promotes quicker evaporation hence the tea or milk in a saucer cools down faster.Q5. What type of clothes should we wear in summers?Ans: We should wear pure cotton clothes and preferably of white colour because cotton fibres absorb perspiration which causes the cooling effect. Secondly, white colour clothes are poor absorbers of heat.

(For Conversion Process, we must know, Kelvin is an SI unit of temperature, where 0°C = 273 K approx.)

(a) 25 °C = (25 + 273) K = 298 K(b) 373 °C = (373 + 273) K = 646 KQ3. Give a reason for the following observations.(a) Naphthalene balls disappear with time without leaving any solid.(b) We can get the smell of perfume sitting several metres away.Ans: (a) At room temperature, naphthalene balls undergo sublimation wherein they directly get converted from a solid to a gaseous state without having to undergo the intermediate state, i.e., the liquid state. 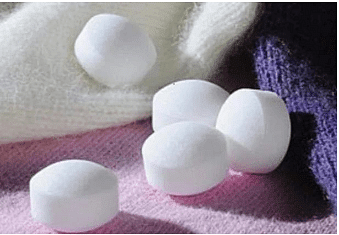 (b) It is because perfumes contain a volatile organic solvent that can easily diffuse through air and hence, carry the fragrance to people sitting several metres away.Q4. Arrange the following substances in increasing order of forces of attraction between particles: Water, Sugar, Oxygen.Ans: Oxygen (gas) < Water (liquid) < Sugar (solid)Q5. What is the physical state of water at: (a) 25°C, (b) 0°C, (c) 100°C?Ans: The physical state of water at:(a) At 25°C, the water will be in liquid form (normal room temperature).(b) At 0°C, the water is at its freezing point, hence both solid and liquid phases are observed.(c) At 100°C, the water is at its boiling point, hence both liquid and gaseous state of water (water vapour) are observed.Q6. Give two reasons to justify.(a) Water at room temperature is a liquid.(b) An iron almirah is a solid at room temperature.Ans:(a) Water at room temperature is a liquid because:(i) It has fluidity.(ii) It has no shape but has a fixed volume that is, it occupies the shape of the container in which it is kept.

(b) An iron almirah is a solid at room temperature because:(i) It has a definite shape and volume like a solid(ii) It is rigid as solidQ7. Why is ice at 273 K more effective in cooling than water at the same temperature?Ans: The ice at 273 K is more effective in cooling than water because particles in ice at 273 K firstly convert into liquid by absorbing latent heat of fusion, whereas no phase change takes place in case of liquid. So, due to more absorption of energy, more cooling occurs.Q8. What produces more severe burns, boiling water or steam?Ans: Steam produces severe burns because steam has more kinetic energy than water as it possesses the additional energy of latent heat of vaporization.Q9. Name A, B, C, D, E and F in the following diagram showing the change in its state.

The document NCERT Solutions: Matter In Our Surroundings Notes | Study Science Class 9 - Class 9 is a part of the Class 9 Course Science Class 9.
All you need of Class 9 at this link: Class 9