Q. 3. In the following statements, tick ‘T’ against those which are true, and ‘F’ against those which are false:
(a) Sound cannot travel in vacuum.
(b) The number of oscillations per second of a vibrating object is called its time period.
(c) If the amplitude of vibration is large, sound is feeble.
(d) For human ears, the audible range is 20 Hz to 20,000 Hz.
(e) The lower the frequency of vibration, the higher is the pitch.
(f) Unwanted or unpleasant sound is termed as music.
(g) Noise pollution may cause partial hearing impairment.
Ans. (a) True
(b) False
(c) False
(d) True
(e) False
(f) False
(g) True.

Q. 6. The sound from a mosquito is produced when it vibrates its wings at an average rate of 500 vibrations per second, what is the time period of the vibration?
Ans. Total vibrations = 500 Time taken = 1 second Time taken to complete one vibration =

Q. 7. Identify the part which vibrates to produce sound in the following instruments. (a) Dholak (b) Sitar (c) Flute.
Ans. (a) Stretched membrane
(b) Strings
(c) Air column.

Q. 12. Sketch larynx and explain its function in your own words. Ans. Larynx is also known as voice box. It has vocal cords which have air column vibrating in them, which cause sound in humans. 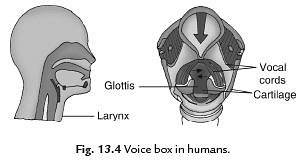