Q1. How does the sound produced by a vibrating object in a medium reach your ear?
Ans. When a disturbance is created in an object, it starts vibrating and sets the particles of the medium to vibrate. The particle of the medium is displaced from its mean position and exerts a force in the adjacent particle. As a result, the adjacent particle is disturbed from its mean position and the original particle comes back to rest. This process continues till the disturbance reaches our ear.

Q2. Explain how sound is produced by your school bell.
Ans. When the bell is hit manually with a rod, the object, i.e. the bell starts vibrating causing disturbance in the medium, i.e. air. Here the air particles do not travel, they oscillate back and forth to transmit the disturbance till it reaches our ears.

Q6. Guess which sound has a higher pitch: guitar or car horn?
Ans. Car horn has the higher pitch.

Q8. How are the wavelength and frequency of a sound wave related to its speed?
Ans. The speed is defined as the distance travelled by a wave per unit time.

λ is the wavelength, T is the time period

Q11. Distinguish between loudness and intensity of sound.
Ans.

Q1. What is sound and how is it produced?
Ans. Sound is a form of energy. It is produced when the object starts vibrating.

Q2. Describe with the help of a diagram, how compressions and rarefactions are produced in air near a source of sound. 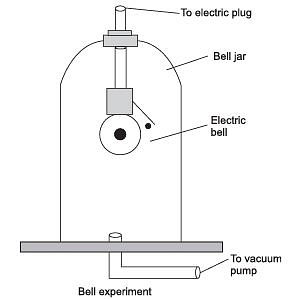 Working: (i) When we press the switch, we’ll be able to hear the bell.
(ii) When the air in the jar is pumped out gradually, the sound becomes feeble although the same amount of current is flowing through the bell.
(iii) When the air is removed completely, we’ll not be able to hear the sound of the bell.
Conclusion: This experiment shows that sound requires a medium for its propagation.

We know that speed = distance / time

Frequency =  No. of oscillations/ Time taken

Q11. When a sound is reflected from a distant object, an echo is produced. Let the distance between the reflecting surface and the source of sound production remains the same. Do you hear echo sound on a hotter day?
Ans. Time = distance/ speed

Time is inversely proportional to the speed. As the temperature increases, the speed increases. Thus on a hot day due to high temperature the speed of sound increases. Hence the time will decrease and we can hear the echo sooner.

Q12. Give two practical applications of reflection of sound waves.
Ans. Reflection of sound is used in megaphones, horns and musical instruments such as trumpets and shehnais. It is used in stethoscope for hearing patient’s heartbeat. Ceilings of the concert halls are curved, so that sound after reflection reaches all corners of the hall. (Any two practical applications can be written). 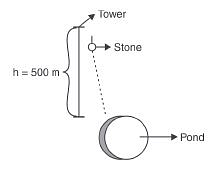 It will not be audible.

Q15. What is reverberation? How can it be reduced?
Ans. The persistence of sound in an auditorium is the result of repeated reflections of sound and is called reverberation.
To reduce the undesirable effects due to reverberation, roofs and walls of the auditorium are generally covered with sound absorbent materials like compressed fiberboard, rough plaster or draperies. The seat materials are also selected having sound absorption properties.

Q16. What is loudness of sound? What factors does it depend on?
Ans. The loudness of sound is determined by its amplitude. The amplitude of the sound wave depends upon the force with which an object is made to vibrate. Loud sound can travel a larger distance as it is associated with higher energy. A sound waves spreads out from its source. As it moves away from the source its amplitude as well as its loudness decreases.

Q17. Explain how bats use ultrasound to catch a prey.
Ans. Bats search out its prey by emitting and detecting reflections of ultrasonic waves. The high-pitched ultrasonic squeaks of bat are reflected from the obstacles or prey and return to bat’s ear. The nature of reflection tells the bat where the obstacle or prey is and what it is like.

Q18. How is ultrasound used for cleaning?
Ans. Ultrasound is used to clean parts located in hard-to-reach places (i.e.) spiral tube, odd shaped parts, electronic components etc. Objects to be cleaned are placed in a cleaning solution and ultrasonic waves are sent into the solution. Due to the high frequency, the dust particles, grease get detached and drop out. The objects thus get thoroughly cleaned.

Q19. Explain the working and application of a sonar.
Ans. Working: SONAR consists of a transmitter and a detector and is installed in a boat or a ship as shown in the figure. The transmitter produces and transmits ultrasonic waves. These waves travel through water and after striking the object on the seabed, get reflected back and are sensed by the detector. The detector converts the ultrasonic waves into electrical signals which are appropriately interpreted. The distance of the object that reflected the sound wave can be calculated by knowing the speed of sound in water and the time interval between the transmission and reception of the ultrasound. 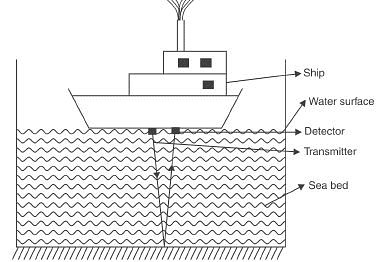 Q21. Explain how defects in a metal block can be detected using ultrasound.
Ans. Ultrasounds can be used to detect cracks and flaws in metal blocks. Metallic components are used in the construction of big structures like buildings, bridges, machines and scientific equipments. The cracks or holes inside the metal blocks, which are invisible from outside reduces the strength of the structure. Ultrasonic waves are allowed to pass through the metallic block and detectors are used to detect the transmitted waves. If there is even a small defect, the ultrasound gets reflected back indicating the presence of the flaw or defect. 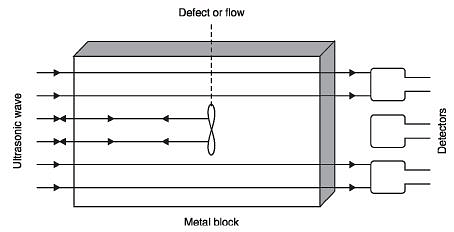 Q22. Explain how the human ear works.
Ans. The outer ear is called ‘pinna. It collects the sound from the surroundings. The collected sound passes through the auditory canal. At the end of the auditory canal there is a thin membrane called the ear drum or the tympanic membrane. When a compression of the medium reaches the eardrum the pressure on the outside of the membrane increases and forces the eardrum inward. Similarly, the eardrum moves outward when a rarefaction reaches it. In this way the eardrum vibrates. The vibrations are amplified several times by three bones (the hammer, anvil and stirrup) in the middle ear. The middle ear transmits the amplified pressure variations received from the sound wave to the inner ear. In the inner ear, the pressure variations are turned into electrical signals by the cochlea. These electrical signals are sent to the brain via the auditory nerve and the brain interprets them as sound.