The document NCERT Solutions - Determiners Class 9 Notes | EduRev is a part of the Class 9 Course English Grammar (Communicative) Interact In English- Class 9.
All you need of Class 9 at this link: Class 9

1. Complete the introduction given below to the story The Story Teller by Saki (H.H. Munro), by using 'a' 'an' or 'the'.

Answer:The afternoon was hot, and so was (a) _the_ railway carriage. (b) _The_ next stop was at Templecombe, nearly (c) _an_ hour ahead. In the carriage were a small girl, (d) _a_ smaller girl, and a small boy. (e) _An__ aunt belonging to (f) _the_ children sat in (g) _a_ corner seat, and in (h)_the_ further corner seat on (i) _the_ opposite side, was a man who was a stranger to them, but (j) _the_ small girls and the small boy were (k) _the_ ones who filled the compartment.The children chatted on and on to their aunt, like (l) _a_ housefly that refuses to be put off. Most of the aunt's remarks seemed to begin with "Don't", and nearly all of (m) _the_ children's remarks began with "Why?"

1.1 Answer the following questions (a) Where were the characters at the time of narration? Answer: They were in a railway carriage.

(c) How did the children pass their time? Answer: They passed their time by chatting on and on to their aunt.

(e) How does the aunt respond to the children's antics? Why do you say so? Answer: The aunt tried to put them off. Most of her remarks began with "Don't".

2.1 An astronaut is speaking to the Mission Control from her capsule, describing geographical features she can see on Earth. Decide which features she is talking about. Fill in the gaps in the astronaut's description below. Use the names given in the box with the correct determiners (a, an, the). (The first two have been done for you).

3. Choose a suitable word from the options given and complete the story from Tunisia.

3.1 Based on your reading of the above story, answer the following questions.

(a) How did the Bedouin and his wife extend their hospitality to the weary traveller?Ans. They offered him shelter and killed a chicken for his supper.

(b) Why didn't she have any meat left to serve her guest? Ans.  Because she and her son ate the whole chicken.

(c) Why was her son crying out aloud? Ans.  Because he asked for more chicken.

(d) How did she cover up her mistake? Ans.  She scolded her son and called it a shameful habit.

(e) Why did the traveller flee from the tent? Ans. The traveller was afraid after hearing that Bedouin had a habit of cutting ears and roasting them. To save his life, he fled from the tent.

5. Here are a few questions and statements written down by the Cultural Secretary, that she/he needs to share. Tick the correct words from those given in brackets.(a) How (much/many) (chair/chairs) do we need?(b) (Much/ Several) (school/ schools) will be participating.(c) (Several/much) (student/students) have arrived.(d) How (much/many) (information/ informations) does this brochure give?(e) We have only (a few/ a little) sponsors for (some/ much) events.

Answer:(a) How many chairs) do we need?(b) Several schools will be participating.(c) Several students have arrived.(d) How much information does this brochure give?(e) We have only a few sponsors for some events.

5.1 In pairs, study the completed sentences in 5 above. You will notice that words like a little and much go with certain nouns. Are these nouns Countable [C] or Uncountable [U]?Answer: 'much' and 'little' go with uncountable nouns.

Study the following graph depicting major exports from Medland in the current year. 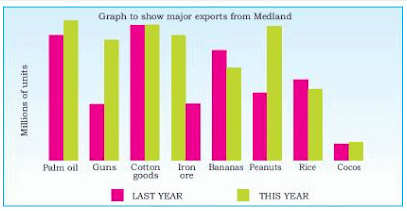 Write a short report on major exports from Medland this year compared with the last year. Use words from the box above. Divide your report into two paragraphs as indicated.

7. In pairs, match A and B to produce likely phrases.

There is sometimes more than one sensible combination as in the exampleAnswer:(i) A horse, A chicken, A fact, A glass(ii) An equipment(iii) Some oil, some furniture, some information, some goods, some snow, some people, some news, some work(iv) A pair of trousers, A pair of scissors, a pair of glasses, a pair of binoculars(v) A piece of clothing, A piece of furniture

8. Compounds - someone, nothing etc.

someone, somebody, something, somewhere, anyone, anybody, anything, anywhere, none, nobody, nothing, nowhere, everyone, everybody, everything, everywhere(Words ending with one and body mean the same.)

Fill in the gaps with some of the words from the  above.

(a) He can't hear __anything__. He's completely deaf.(b) Everything__ is going blurred. I can't see!(c) He's looked everywhere_ but he can't find it.(d) It must be _somewhere! Look carefully.(e) Nobody_must move or the horse will be scared.(f) It doesn't matter what you wear, _anything_will do.(g) She is very popular. _Everybody_likes her.(h) Shh! There is _someone__ moving downstairs.(i) Don't worry ! It's _nothing_frightening. It is only the wind.(j) It's a public holiday, so_nothing_is open.

9.1 Work in pairs and recognise how many words belong to each set. Complete the sentences as in the example. Use words only from the box above.

4. Languages?    Telugu, Bengali, Punjabi, Holland    Three of them are languages.

5. Capital Cities?    Pokhara, Mandalay, New York, Melbourne    None of them is a capital.

Malavika and Deepak are looking through some photographs of Malavika's family.Malavika : Now … this is my brother Shantanu. Shantanu is in Class VIII. Shantanu is brilliant at playing tennis. Shantanu is also good at singing. Shantanu sings a lot.Deepak : Shantanu sounds interesting. I'd like to meet Shantanu. I'm looking for someone to play tennis with.Malavika : Well … why don't you come around tonight and meet Shantanu? My parents will be out. My parents always go out on Tuesdays.

Improve the above conversation by using suitable pronouns where required

Answer:Malavika : Now … this is my brother Shantanu. He is in Class VIII. He is brilliant at playing tennis. he is also good at singing. He sings a lot.Deepak : Shantanu/He sounds interesting. I'd like to meet him. I'm looking for someone to play tennis with.Malavika : Well … why don't you come around tonight and meet him? My parents will be out. They always go out on Tuesdays.