The document NCERT Solutions - Prepositions Class 9 Notes | EduRev is a part of the Class 9 Course English Grammar (Communicative) Interact In English- Class 9.
All you need of Class 9 at this link: Class 9

1. Read the following passage on New Zealand.New Zealand is a Mecca for nature lovers. Throughout most of New Zealand's geological history, it was a bird's paradise. The islands were once part of the southern super - continent Gondwana from which they broke off around 80 million years ago before mammals had evolved and spread.

The underlined words express a relationship usually of space or time between the words with which they stand. Such 'Positional' words which are used before nouns (pre-position) are called ___prepositions_____

2. Identify the functions of the prepositions in each of these sentences.

3. Fill in the blanks with suitable prepositions.

4. Group the prepositions in the box below to indicate their use as prepositions of place (P), movement (M) or time (T). There may be more than one category for each.

5. A student from a lower class asks you to help her illustrate for her class, the use of different prepositions.In groups of four, choose one of the following lists of prepositions and draw simple pictures to illustrate their meaning

Answer: A few are illustrated below: 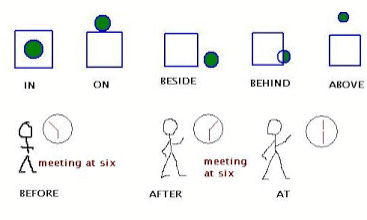 7. This description is taken from a well-known film. Can you guess which one?

A man in a red cape and blue tights is flying over a city. On his chest is the letter S. Below him a large crowd is pointing up at him.Imagine a scene from a play, film or TV show you have seen. Describe (a) where things and people are, and (b) any movement. Follow the example. Show your description to your partner. Guess each other's play or film.Answer:Before us is the Salesman’s house. We are aware of towering, angular shapes behind it, surrounding it on all sides. Only the blue light of the sky falls upon the house and forestage; the surrounding area shows an angry glow of orange. As more light appears, we see a solid vault of apartment houses around the small, fragile-seeming home. An air of the dream dings to the place, a dream rising out of reality. The kitchen at center seems actual enough, for there is a kitchen table with three chairs, and a refrigerator. But no other fixtures are seen. At the back of the kitchen there is a draped entrance, which leads to the living room. To the right of the kitchen, on a level  raised two feet, is a bedroom furnished only with a brass bedstead and a straight chair. On a shelf over the bed a silver athletic trophy stands. A window opens onto the apartment house at the side.

8. Study the map and the key given below carefully, and complete the sentences that follow. 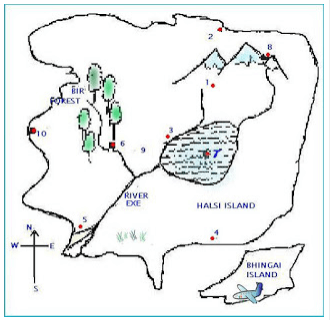 (Note the use of words like along, north of etc.)Now describe the position of the other eight places, using some of the words in the box.

9. Look at the map below.You have invited three friends to a party at your house. Write three separate notes, giving them directions from 1, 2 and 3 to your house. You may use the words in the box. 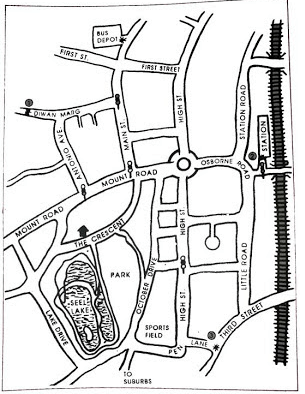 The directions from (1) are given here as an exampleGo down Diwan Marg and turn right down Antonio Avenue. Walk as far as the traffic lights then turn right into Mount Road. Turn first left into The Crescent and my house is on the left.

11. You have recently been to a wedding. A British pen friend asks you to describe it. Using the words in the box, describe the different stages. Write only the body of the letter below.

Dear Abby,        How are you doing? Last week I got a chance to attend a North Indian marriage. If you happen to be in India and do not attend Indian marriage, you a miss a lot! A big fat Indian marriage is a show which never fails to entertain! All you can say, it full of music, dance, fun and family ties. Usually it is multi-tier events which last for a week. Throughout theses events you have exotic food, sweets, dances and music. I reached the groom's house a day before the wedding. The house was fully decorated with flowers and garlands. It was illuminated with lights. The bridegroom's family has been busy formany weeks preparing for the events. The groom himself has been shopping since he got engaged. By evening the Ladies Sangeet started which is followed by dinner. Boys were busy outside the house with loud music and dance. No body complained at such events until it was past two midnight. Next day was the final day of the celestial knot. On that day, there was lot of hustle and bustle. Everybody from groom's family was busy to materialize this majestic occasion. By evening all were ready to march towards the bride's house with band baja and barati. The venue was a marriage hall not very far but it took us nearly two hours. During this procession, everybody was dancing with joy. The marriage venue was splendidly decorated and illuminated. Bride's relatives welcomed us. The groom was escorted to a stage where after few rituals bride joined him. The bride was looking gorgeous wearing a lovely red attire and heavy jewelry.   Both exchanged garlands and sat on the grand sofa at the stage side by side. Dinner was served with sumptuous dishes. After dinner, almost all the guests except near relatives left. Later bride and his groom sat beside the holy fire and performed various Hindu rituals and tied their knot. At dawn, the bride's relatives saw her off with tearful eyes.I'll share the video and pictures with you. Till then ... good bye!yours friendXYZ

12. Link the words from the different columns to produce meaningful sentences. One has been completed as an example. If you wish, write out the correct sentences in your notebook.

13. Verbs and PrepositionsFill in the gaps with suitable prepositions

14. Adjectives and PrepositionsLook at the table below. Decide which of the adjectives in Column A commonly go with which preposition. Tick the table as shown. (There may be more then one tick for each adjective)

15. Use the adjectives and prepositions from the box above to fill in the gaps below. Add eight sentences of your own.

16. Think of a person in your class, and use adjective + prepositions from 14 to describe him/her in about two or three sentences. Don't give a name