Simple Past and Past Perfect

1. Complete this story by Julius Lester. Choose the correct forms of the words

given in the brackets.

1.1 Answer the following questions based on the story you have read.

(a) What had Brer Rabbit found out?Ans. That gardening was a very complex task for him.

(b) What did he do when the plants grew?Ans. The Rabbit decided to make his acquaintance with them.

(d) Brer Fox had an idea of who was stealing from his patch. What did he do to trap Brer Rabbit?Ans. Brer Fox laid a trap to catch the rabbit. He tied a rope with a loop knot and put it inside the hole.

2. Here is a news story about how crops are saved by climate-proofing them. Complete it by choosing the right words from those given in the brackets.

Among the most worrying aspects of climate change today (a)______ (is/has been) the effect it (b) ________ (has had/have had) on the food supply of the world. Scientists (c) _______ (have focussed/focus) their attention and efforts on increasing crop yield and improving crop resilience. Asia and Sub-Saharan Africa (d) ________ (have been/are) the most affected today. Their population (e) ________ (is/ has been) the world's fastest growing rice consumer. The most vulnerable agricultural systems (f) ______ (are/have been) the rain-fed uplands and lowlands that form 80% of total rice land. Until recently, scientists (g) _________ (have focussed /focussed) on improving crop yields, and in a relatively short period of time, (h) _____ (give/ have given) us, higher yields. Reports warning of increased droughts and floods, (i) ___________ (shift/ have shifted) scientists' attention to making crops "climate - proof"

2.1. Answer the questions based on your reading of the passage above.

(a) What have been the most worrying aspects of agricultural growth?Ans. Its affect on climate change.

(b) What do scientists today focus on? Ans. How to make the crops 'climate proof'.

(c) Where is the negative impact of climate most felt? Ans. Asia and Sub-Saharan Africa.

(d) What have the scientists focussed on so far? Ans.  Increasing crop yield.

(e) How has their attention shifted? Ans. rising droughts and floods.

3. Write a brief account of his/her actions on the specified times and days, in the space below. Ask further questions, if necessary. Use the simple past/the past perfect tense to write your description. e.g. (a) Rani visited the zoo on Sunday.        (b) She had finished all her homework by 5.00 am on that day.Answer: (a) Divshaan woke up at 8.30 am last Sunday.(b) Then he went for a walk with his father.(c) He had completed his homework by 3pm on that day.(d) Then he went to play football.(e) By 10 pm he made sure that he had revised one chapter.

Simple Past and Past Continuous

6. Look at the verbs in the box and put them in the correct columns in the table that follows

7. The Verb 'to have'Put a tick (✔) or cross (x) against each sentence according to whether it is correct or incorrect.

(b) He is having a blue-coloured Maruti car. (x)

Correction: He has a blue-coloured Maruti car.

8 Now, work individually, and with the help of the information in the box below, write six appropriate sentences.

9 'Since' and 'For'Which expressions go with since and which go with for? 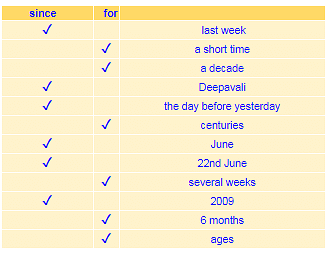 We use 'since' to express a point in time, whereas 'for' is used to express period/duration of time.

10. Choose three 'since' expressions and three 'for' expressions from the table above. Then write six sentences using the pattern in the box below.

b. Narendra Singh from St. Michael's School has broken the regional long jump record. The principal of St. Michael's has sent his congratulations. Best wishes have also come from the President of the Youth Federation.

Work individually, and note down some events that occurred recently in your school or local area in the same way as the example in (a). Write a short report about it in the space given below.

Answer:XYZ School has organised a sports meet at zonal level. The principal has invited our education minister as the chief guest. Director of Education has sent his good wishes to the participants.  Different schools have participated in the event and have won many prizes. Our students have participated both in a group and individual events and have won laurels.(Note: Present perfect tense is often used for reporting or announcing an event of the recent past. Present perfect tense is also used in technical writing.)

12. "What have you been doing?"Imagine what people have been doing or what are the things that have been happening.

(b) Ramesh comes in with a smile on his face. He is holding a trophy.(i)  I think he has been participating in a competition.(ii) Perhaps he has been the part of the winning team.

12.2 Now write three situations similar to (a) in the box. Exchange the information with your partner and guess the answer to each other's situations as in (b)

Answer: 1. Somesh comes in wearing shorts and spikes. He is breathing heavily.(i) I think he has been running since morning.(ii) Perhaps he has been participating in the athletic meet.

2. Nancy looks pale and yellow.(i) I think she has been ill since last March.(ii) Perhaps she has not been taking her medicines.

3. We hardly see Mohan at the coffee house.(i) Perhaps he has been busy writing his novel.(ii) I imagine he has been working on his latest novel.

13. "Living conditions have been improving…." 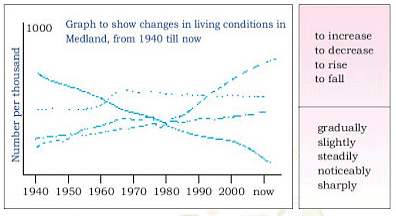 Write a report on the changes in living conditions in Medland between 1950 and now. Suggest reasons for these changes. Use the present perfect continuous where necessary. You may wish to use the words in the vertical box above right.

a) Over the years since 1950, the number of children in secondary schools has been increasing noticeably. This is possibly because the Government has been building more schools.b) The number of homes with running water has been rising sharply since 1985, whereas…………

Read the passage given below. Substitute 'used to' with 'would' wherever appropriate so that the passage reads better

Could you replace 'used to' with 'would' in every instance?No. This is because they are used differently.Read the passage again and complete the sentences below.1. 'used to' is used describe _past habits/ possession/past states_ in the present as well as situations that existed in the past.2. 'would' is used to describe only _repeated actions_ in the past.

Think of the days when you were eight years old. Write down four or five things you would do or used to do or be. Make sentences like those in the box. Share your experiences with your partner.

Answer:1. I used to play foot ball but now I've stopped.2. I would go to the playground daily. (Note: past habit, you may use used to also).3. When I was young I used to/would sit in the garden painting for hours. (past habit, both would or used to can be used).4. I used to have a model plane. (Note: possession, you cannot use would here)5. I would use pencil not pen.

18.1. Edit the following letter by choosing the appropriate word for each underlined word from the given options.

Our school (a) conducted a cultural fiesta on the 26th of this month. The events for competition (b) includes music, dance and skit. Each school (c) are requested to send not more than fifteen participants. We would appreciate if the students of your prestigious institution (d) are participating in the competition and make our show a grand success. Attractive prizes will be awarded to the winners.

The PrincipalNational Public SchoolBilaspurMadamOur school (a) is conducting a cultural fiesta on the 26th of this month. The events for competition (b) include music, dance and skit. Each school (c) is requested to send not more than fifteen participants. We would appreciate if the students of your prestigious institution (d)participate in the competition and make our show a grand success. Attractive prizes will be awarded to the winners.

Thank you very much

18.2 Complete the following news item by choosing the correct word from the options given below.

Vanamahotsava (a) was celebrated by Green Fingers, the Environment Club of the school, with great enthusiasm on the 24th August.The District Forest Officer, Mr S. D. Bhambri (b) was the chief guest. He (c) inaugurated the Bio-diversity Park in the school. The Principal, Ms Rajni Patel, (d) planted a sapling in the Park.Speaking on the occasion, Mr Bhambri (e) urged the students to plant more trees and to launch a campaign to save the environment. Students of the Primary Wing of the school (f) presented a skit on the conservation of the environment.