Climate refers to the sum total of weather conditions and variations over a large area for a long period of time (more than thirty years). Weather refers to the state of the atmosphere over an area at any point of time. 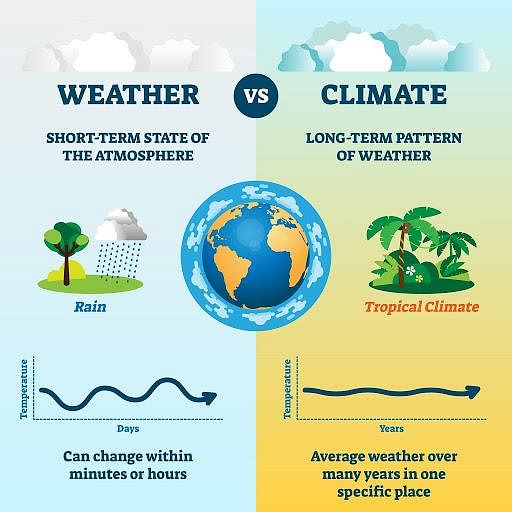 The elements of weather and climate are the same, i.e. temperature, atmospheric pressure, wind, humidity and precipitation. You may have observed that the weather conditions fluctuate very often even within a day. But there is some common pattern over a few weeks or months, i.e. days are cool or hot, windy or calm, cloudy or bright, and wet or dry. On the basis of the generalized monthly atmospheric conditions, the year is divided into seasons such as winter, summer or rainy seasons.

Factors determining the climate of India

The climate of Punjab is tropical, semi-arid, steppe and hot and subtropical monsoon type with cold winter and hot summer. Most of Punjab lies in the fertile plain; toward the southeast one finds semi-arid and desert landscape; a belt of undulating hills extends along the northeast at the foot of the Himalayas.

(a) Factors related to Location and Relief

(b) Factors Related to Air Pressure and Wind

The mechanism of these three factors can be understood with reference to winter and summer seasons of the year separately.

The climate of any particular place is influenced by a host of interacting factors. These include latitude, elevation, nearby water, ocean currents, relief features, topography, vegetation, and prevailing winds.

Mechanism of Weather in The Summer Season

The Inter-Tropical Convergence Zone, or ITCZ, is a belt of low pressure which circles the Earth generally near the equator where the trade winds of the Northern and Southern Hemispheres come together. It is characterised by convective activity which generates often vigorous thunderstorms over large areas.

View Solution
The Nature of Indian Monsoon
Monsoon is a familiar, though a little known climatic phenomenon. Despite the observations spread over centuries, the monsoon continues to puzzle the scientists. Many attempts have been made to discover the exact nature and causation of monsoon, but so far, no single theory has been able to explain the monsoon fully. A real breakthrough has come recently when it was studied at the global rather than at regional level.Systematic studies of the causes of rainfall in the South Asian region help to understand the causes and salient features of the monsoon, particularly some of its important aspects, such as:

Onset of the Monsoon

There seem to be two rain-bearing systems in India. First originate in the Bay of Bengal causing rainfall over the plains of north India. Second is the Arabian Sea current of the southwest monsoon which brings rain to the west coast of India. Much of the rainfall along the Western Ghats is orographic as the moist air is obstructed and forced to rise along the Ghats.The intensity of rainfall over the west coast of India is, however, related to two factors:

(i) The offshore meteorological conditions.(ii) The position of the equatorial jet stream along the eastern coast of Africa.

The frequency of the tropical depressions originating from the Bay of Bengal varies from year to year. Their paths over India are mainly determined by the position of ITCZ which is generally termed as the monsoon trough. As the axis of the monsoon trough oscillates, there are fluctuations in the track and direction of these depressions, and the intensity and the amount of rainfall vary from year to year. The rain which comes in spells, displays a declining trend from west to east over the west coast, and from the southeast towards the northwest over the North Indian Plain and the northern part of the Peninsula.

EI-Nino and the Indian Monsoon

Try yourself:What is the effect of El Nino on Indian monsoon?
Explanation

El Nino has been generally known to suppress(decreases) monsoon rainfall in India while La Nina increases it. El Niño years tend to be drier than average.