Ans. cCyanobacteria or BGA are the members of kingdom Monera which show the following characteristic features:

Q.6. Which of the following statements is correct?       (NEET 2021)(a) Organisms that depend on living plants are called saprophytes.(b) Some of the organisms can fix atmospheric nitrogen in specialized cells called sheath cells. (c) The fusion of two cells is called Karyogamy.(d) Fusion of protoplasms between two motile on non-motile gametes is called plasmogamy.

Q.8. Which of the following statements is incorrect?       (NEET 2019)(a) Yeasts have filamentous bodies with Iong thread-like hyphae.(b) Morels and truffles are edible delicacies.(c) Claviceps is a source of many alkaloid and LSD.(d) Conidia are produced exogenously and ascospores endogenously. 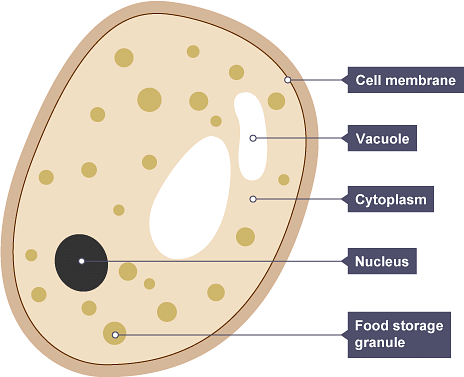 Choose the correct answer from the options given below:

Q.10. Which of the following statements is incorrect?       (NEET 2019)(a) Prions consist of abnormally folded proteins.(b) Viroids lack a protein coat.(c) Viruses are obligate parasites.(d) Infective constituent in viruses is the protein coat.

Ans. dInfective constituent in viruses is the genetic material, i.e., either DNA or RNA. 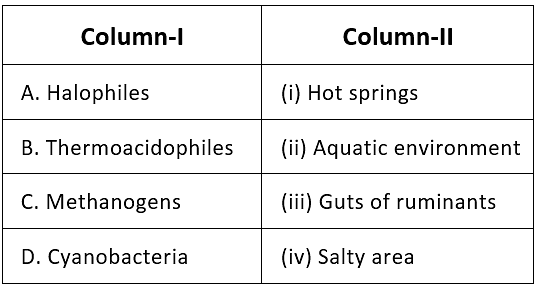 Q.13. Select the wrong statement.       (NEET 2018)(a) Cell wall is present in members of fungi and plantae.(b) Mushrooms belong to basidiomycetes. (c) Pseudopodia are locomotory and feeding structures in sporozoans.(d) Mitochondria are the powerhouse of the cell in all kingdoms except monera.

Green sulphur bacteria do not have the ability to use water as an electron donor (or cannot oxidise water), instead, they perform photosynthesis using sulfide. Therefore, they do not evolve oxygen during photosynthesis.

Q.16. Which of the following organisms are known as chief producers in the oceans?       (NEET 2018)(a) Dinoflagellates(b) Diatoms(c) Cyanobacteria(d) Euglenoids

Ans. bDiatoms are the most common form of phytoplankton in the ocean. They have the pigment chlorophyll which helps in photosynthesis. Since they are the primary producers of the aquatic chain and the marine ecosystem depends on them. They are called chief producers in the oceans.

Q.17. Ciliates differ from all other protozoans in:       (NEET 2018)(a) Using flagella for locomotion.(b) Having a contractile vacuole for removing excess water.(c) Using pseudopodia for capturing prey.(d) Having two types of nuclei.

Ans. dCiliates differ from other protozoans in having two types of nuclei. They are macronucleus and micronucleus (nuclear dimorphism).Example: Paramecium has a macronucleus which controls metabolic activities as well as growth and a micronucleus that takes part in reproduction.

Q.18. Which of the following are found in extreme saline conditions?       (NEET 2017)(a) Eubacteria(b) Cyanobacteria(c) Mycobacteria(d) Archaebacteria

Q.20. Which among the following are the smallest living cells, known without a definite cell wall, pathogenic to plants as well as animals and can survive without oxygen?       (NEET 2017)(a) Pseudomonas(b) Mycoplasma(c) Nostoc (d) Bacillus

Ans. bMycoplasmas are the smallest living cells, known without a definite cell wall. They are pathogenic to both plants and animals and can survive without oxygen.

Q.21. Which of the following components provides a sticky character to the bacterial cell?        (NEET 2017)(a) Nuclear membrane(b) Plasma membrane(c) Glycocalyx(d) Cell wall

Ans. cGlycocalyx is the outermost mucilage layer of the cell envelope which consists of non-cellulosic polysaccharides with or without proteins. It gives a sticky character to the cell.

Q.22. DNA replication in bacteria occurs:       (NEET 2017)(a) Within nucleolus(b) Prior to fission(c) Just before transcription(d) During the S phase

Ans. bDNA replicates in bacteria just before they divide by fission.

Q.23. Which one of the following is wrong for fungi?       (NEET 2016)(a) They are eukaryotic.(b) All fungi possess a purely cellulosic cell wall.(c) They are heterotrophic.(d) They are both unicellular and multicellular.

Ans. bThe cell wall in fungi is composed of chitin, a polysaccharide comprising N-acetyl-D-glucosamine (a derivative of glucose).

Ans. aDiatoms are marine or freshwater unicellular organisms that have cell walls (frustules) composed of pectin impregnated with silica and consisting of two halves, one overlapping the other. The siliceous frustules of diatoms do not decay easily.

Q.26. The primitive prokaryotes responsible for the production of biogas from the dung of ruminant animals include the ______.       (NEET 2016)(a) Methanogens(b) Eubacteria(c) Halophiles(d) Thermoacidophiles

Ans. aMethanogens are present in the gut of several ruminant animals such as cows and buffaloes and they are responsible for the production of methane (biogas) from the dung of these animals.

Q.28. Which of the following statements is wrong for viroids?       (NEET 2016)(a) They cause infections.(b) Their RNA is of high molecular weight.(c) They lack a protein coat.(d) They are smaller than viruses.

Ans. bRNA of viroid has a low molecular weight.

Ans. cThe fungal cell wall contains chitin or fungal cellulose along with other polysaccharides, proteins, lipids and a number of other substances.

The document NEET Previous Year Questions (2016-22): Biological Classification Notes | Study Biology Class 11 - NEET is a part of the NEET Course Biology Class 11.
All you need of NEET at this link: NEET
Join Course