The document Natural Vegetation and Wildlife - Notes, Class 9 | EduRev Notes is a part of Class 9 category.
All you need of Class 9 at this link: Class 9

Meaning of Natural Vegetation:- Natural vegetation refers to a plant community which has grown naturally without human aid and has been left undisturbed by humans for a long time. This is termed as virgin vegetation. Thus, cultivated crops and fruits, orchards form part of vegetation but not natural vegetation.

Virgin vegetation -The virgin vegetation, which are purely Indian are known as endemic or indigenous species but those which have come from outside India are termed as exotic plants.

Flora :- The term flora is used to denote plants of a particular region or period.

Fauna :- the species of animals are referred to as fauna.

This huge diversity in flora and fauna kingdom is due to the following factors.

Land: Land affects the natural vegetation directly and indirectly. The nature of land influences the type of vegetation. The fertile level is generally devoted to agriculture. The undulating and rough terrains are areas where grassland and woodlands develop and give shelter to a variety of wild life.

The character and extent of vegetation are mainly determined by temperature along with humidity in the air, precipitation and soil. On the slopes of the Himalayas and the hills of the Peninsula above the height of 915 metres, the fall in the temperature affects the types of vegetation and its growth, and changes it from tropical to subtropical temperate and alpine vegetation.

Precipitation: In India almost the entire rainfall is brought in by the advancing southwest monsoon (June to September) and retreating northeast monsoons. Areas of heavy rainfall have more dense vegetation as compared to other areas of less rainfall.

The nature of the plants in an area, to a large extent, determines the animal life in that area. When the vegetation is altered, the animal life also changes. All the plants and animals in an area are interdependent and interrelated to each other in their physical environment, thus, forming an ecosystem. Human beings are also an integral part of the ecosystem. A very large ecosystem on land having distinct types of vegetation and animal life is called a biome. The biomes are identified on the basis of plants. 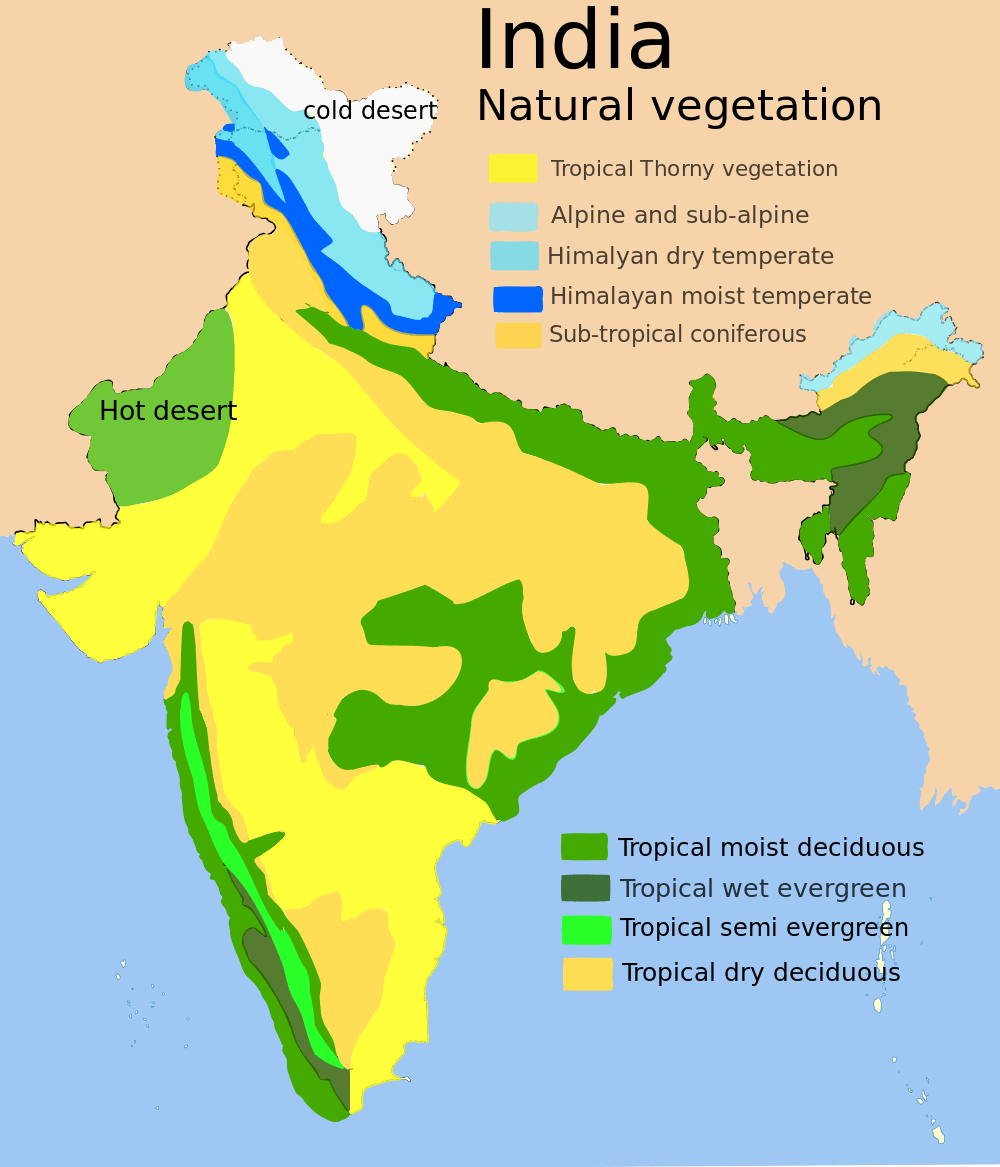 These forests are restricted to heavy rainfall areas of the Western Ghats and the island groups of Lakshadweep, Andaman and Nicobar, upper parts of Assam and Tamil Nadu coast. They are at their best in areas having more than 200 cm of rainfall with a short dry season. The trees reach great heights up to 60 metres or even above. Since the region is warm and wet throughout the year, it has a luxuriant vegetation of all kinds – trees, shrubs, and creepers giving it a multilayered structure. These forests appear green all the year round. Some of the commercially important trees of this forest are ebony, mahogany, rosewood, rubber and cinchona. The common animals found in these forests are elephants, monkey, lemur and deer. The one horned rhinoceros are found in the jungles of Assam and West Bengal. Besides these animals plenty of birds, bats, sloth, scorpions and snails are also found in these jungles.

These are the most widespread forests of India. They are also called the monsoon forests and spread over the region receiving rainfall between 200 cm and 70 cm. Trees of this forest-type shed their leaves for about six to eight weeks in dry summer. On the basis of the availability of water, these forests are further divided into moist and dry deciduous. The former is found in areas receiving rainfall between 200 and 100 cm. These forests exist, therefore, mostly in the eastern part of the country – northeastern states, along the foothills of the Himalayas, Jharkhand, West Orissa and Chhattisgarh, and on the eastern slopes of the Western Ghats. Teak is the most dominant species of this forest. Bamboos, sal, shisham, sandalwood, khair, kusum, arjun, mulberry are other commercially important species. The dry deciduous forests are found in areas having rainfall between 100 cm and 70 cm. These forests are found in the rainier parts of the peninsular plateau and the plains of Bihar and Uttar Pradesh. In these forests, the common animals found are lion, tiger, pig, deer and elephant. A huge variety of birds, lizards, snakes, and tortoises are also found here.

The Thorn Forests and Scrubs

In regions with less than 70 cm of rainfall, the natural vegetation consists of thorny trees and bushes. This type of vegetation is found in the north-western part of the country including semi-arid areas of Gujarat, Rajasthan, Madhya Pradesh, Chhattisgarh, Uttar Pradesh and Haryana. Acacias, palms, euphorbias and cacti are the main plant species. Trees are scattered and have long roots penetrating deep into the soil in order to get moisture. The stems are succulent to conserve water. Leaves are mostly thick and small to minimize evaporation. These forests give way to thorn forests and scrubs in arid areas. In these forests, the common animals are rats, mice, rabbits, fox, wolf, tiger, lion, wild ass, horses and camels.

In mountainous areas, the decrease in temperature with increasing altitude leads to the corresponding change in natural vegetation. The wet temperate type of forests are found between a height of 1000 and 2000 metres. Evergreen broad-leaf trees such as oaks and chestnuts predominate. Between 1500 and 3000 metres, temperate forests containing coniferous trees like pine, deodar, silver fir, spruce and cedar, are found. These forests cover mostly the southern slopes of the Himalayas, places having high altitude in southern and north-east India. Silver fir, junipers, pines and birches are the common trees of these forests. The common animals found in these forests are Kashmir stag, spotted dear, wild sheep, jack rabbit, Tibetan antelope, yak, snow leopard, squirrels, Shaggy horn wild ibex, bear and rare red panda, sheep and goats with thick hair.

The mangrove tidal forests are found in the areas of coasts influenced by tides. Mud and silt get accumutated on such coasts. Dense mangroves are the common varieties with roots of the plants submerged under water. The deltas of the Ganga, the Mahanadi, the Krishana, the Godavari and the Kaveri are covered by such vegetation. Royal Bengal Tiger is the famous animal in these forests. Turtles, crocodiles, gharials and snakes are also found in these forests.

India is known for its herbs and spices from ancient times. Some 2,000 plants have been described in Ayurveda and at least 500 are in regular use. The World Conservation Union’s Red list has named 352 medicinal plants of which 52 are critically threatened and 49 endangered. The commonly used plants in India are:

Sarpagandha : Used to treat blood pressure; it is found only in India.

Jamun: The juice from ripe fruit is used to prepare vinegar which is carminative and diuretic, and has digestive properties. The powder of the seed is used for controlling diabetes.

Arjun: The fresh juice of leaves is a cure for earache. It is also used to regulate blood pressure.

Babool: Leaves are used as a cure for eye sores. Its gum is used as a tonic.

Tulsi Plant: Is used to cure cough and cold.

Kachnar: Is used to cure asthma and ulcers. The buds and roots are good for digestive problems. 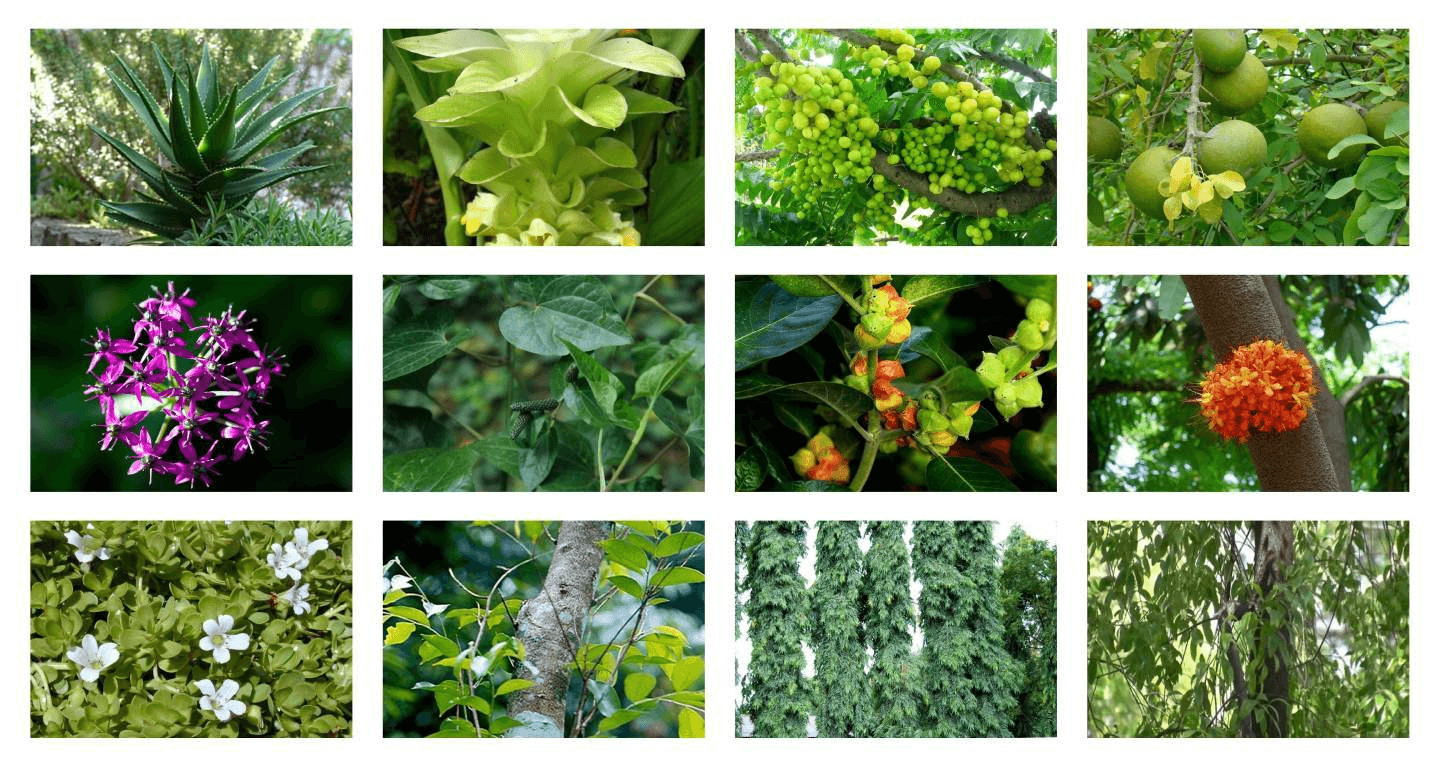 Like its flora, India is also rich in its fauna. It has more than 89,000 of animal species. The country has more than 1200 species of birds. They constitute 13% of the world’s total. There are 2500 species of fish, which account for nearly 12% of the world’s stock. It also shares between 5 and 8 per cent of the world’s amphibians, reptiles and mammals. The elephants are the most majestic animals among the mammals. They are found in the hot wet forests of Assam, Karnataka and Kerala. One-horned rhinoceroses are the other animals, which live in swampy and marshy lands of Assam and West Bengal. Arid areas of the Rann of Kachchh and the Thar Desert are the habitat for wild ass and camels respectively. Indian bison, nilgai (blue bull), chousingha (four horned antelope), gazel and different species of deer are some other animals found in India. It also has several species of monkeys. India is the only country in the world that has both tigers and lions.

The natural habitat of the Indian lion is the Gir forest in Gujarat. Tigers are found in the forests of Madhya Pradesh, the Sundarbans of West Bengal and the Himalayan region. To protect the flora and fauna of the county, the government has taken many steps.

(i) Fourteen biosphere reserves have been set up in the country to protect flora and fauna. Four out of these, the Sunderbans in the West Bengal, Nanda Devi in Uttaranchal, the Gulf of Mannar in Tamil Nadu and the Nilgiris (Kerala, Karnataka and Tamil Nadu) have been included in the world network of Biosphese reserves.

(ii) Financial and technical assistance is provided to many Botanical Gardens by the government since 1992.