Network Theorems The fundamental theory on which many branches of electrical engineerings, such as electric power, electric machines, control, electronics, computers, communications, and instrumentation are built is the Electric circuit theory. So here the network theorem helps us to solve any complex network for a given condition.Note: All the theorems are only applicable to Linear Network only, according to the theory of Linear Network they follow the condition of Homogeneity & Additivity.

Procedure for using the superposition theorem Step-1: Retain one source at a time in the circuit and replace all other sources with their internal resistances.Step-2: Determine the output (current or voltage) due to the single source acting alone.Step-3: Repeat steps 1 and 2 for each of the other independent sources.Step-4: Find the total contribution by adding algebraically all the contributions due to the independent sources.So for above given circuit the total response or say current I thrrough register R2 will be equal to the sum of individual response obtained by each source.

Limitation Superposition cannot be applied to power effects because the power is related to the square of the voltage across a resistor or the current through a resistor. The squared term results in a nonlinear (a curve, not a straight line) relationship between the power and the determining current or voltage.Example:

2. THEVENIN'S & NORTON'S THEOREM Thevenin’s theorem states that any two output terminals of an active linear network containing independent sources (it includes voltage and current sources) can be replaced by a simple voltage source of magnitude VTH in series with a single resistor RTH where RTH is the equivalent resistance of the network when looking from the output terminals A & B with all sources (voltage and current) removed and replaced by their internal resistances and the magnitude of VTH is equal to the open circuit voltage across the A & B terminals.The procedure for applying Thevenin’s theorem To find a current L I through the load resistance RL using Thevenin’s theorem, the following steps are followed: 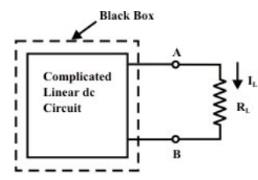 Step-1: Disconnect the load resistance (RL) from the circuit, 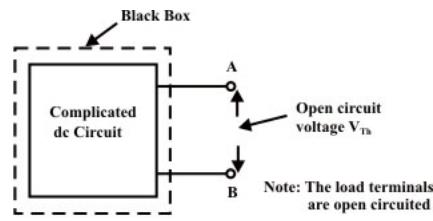 Step-5: Place RTH in series with VTH to form the Thevenin’s equivalent circuit replacing the imaginary fencing portion or fixed part of the circuit with an equivalent practical voltage source. 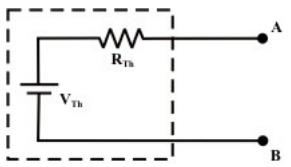 Step-6: Reconnect the original load to the Thevenin voltage circuit as shown in the load’s voltage, current and power may be calculated by a simple arithmetic operation only.

Note: (i) One great advantage of Thevenin’s theorem over the normal circuit reduction technique or any other technique is this: once the Thevenin equivalent circuit has been formed, it can be reused in calculating load current (IL), load voltage (VL) and load power (PL) for different loads.(ii) Fortunately, with help of this theorem, one can find the choice of load resistance RL that results in the maximum power transfer to the load.3. NORTON'S THEOREM Norton’s theorem states that any linear network containing can be replaced by a current source and a parallel resistor. RN = RTH is the equivalent resistance of the network when looking from the output terminals A & B with all sources (voltage and current) removed and replaced by their internal resistances and the magnitude of VTH is equal to the open circuit voltage across the A & B terminals.

IN is the Load current

Note: Maximum power transfer condition results in 50 percent efficiency in Thevenin equivalent, however much lower efficiency in the original circuit.