The document Newton's First Law of Motion and Concept of Inertia, Mass and Momentum Class 9 Notes | EduRev is a part of the Class 9 Course Science Class 9.
All you need of Class 9 at this link: Class 9 Newton's First Law of MotionNewton's first law gives the qualitative definition of force. As it tells us about an agent without which acceleration is not possible.

Newton's first law is also called the law of inertia.

(i) A body cannot change its state of rest by itself.

(ii) A body cannot change its state of motion by itself.

The tendency of a body to oppose any change in its state of rest or of uniform motion is called inertia of the body. 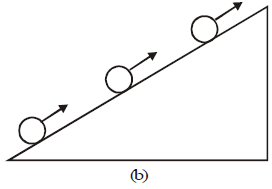 (ii) When the slope of second smooth inclined plane is decreased, and the experiment is repeated, the ball still reaches the same final height. But in doing so, it travels a larger distance as shown in fig.(iii) When the slope of second smooth inclined plane is made zero (i.e., the second plane is made horizontal), the ball travels an infinity distance in the ideal situation (when there is no friction).From his experiments, Galileo concluded that the state of rest and the state of motion with constant velocity are equivalent. In both cases, no net force is acting on the body.Galileo emphasized that it is incorrect to assume that a net force is needed to keep a body in uniform motion along a straight line.

Thus, Galileo concluded that if net external force is zero, a body at rest continues to be at rest, and a body in uniform motion continues to move uniformly along the same straight line. This is Galileo's law of inertia.

This, inherent property of all bodies, by virtue of which they cannot change by themselves their state of rest or of uniform motion along a straight line is called Inertia.

(a) Inertia of rest

The resistance offered by a body to change its state of rest is called inertia of rest. or The tendency of a body to oppose any change in its state of rest is known as inertia of rest.Examples:(i) When a branch of a tree is shaken vigorously, ripe fruits get detached and fall. This is because the branch comes in motion but the fruits at rest tend to remain at rest due to inertia of rest and get detached. After the fruits get detached, gravity plays its role in making the fruits fall.(ii) For removing dust from a carpet, we hang the carpet and then beat it with a stick. Due to the beating action, the carpet moves along the stick and the dust particle, in a tendency to remain at rest, get detached from the carpet.(iii) When you hit a striker on a pile of carrom counters, you will observe that only the lowest counter moves away. The rest of the pile remains in the original position.(iv) A bullet fired from a gun makes a small hole in the window pane while passing through it, but the stone striking the window pane breaks it into pieces. When a bullet strikes the window pane, only a small portion of the window pane where the bullet strikes comes in motion because the bullet makes contact with the pane for a very short time due to its high speed. On the other hand, the remaining portion of the window pane remains at rest due to inertia of rest. Thus, a small hole is made by the bullet in the window pane.

The speed of the stone is very small compared to the speed of the bullet. So the stone makes contact with the window pane for longer period of time. During this longer time. The whole window pane comes in motion and hence breaks into pieces.(v) Suppose we are standing in a stationary bus and the driver starts the bus suddenly. We get thrown backward with a jerk.(vi) When a horse starts suddenly, the rider tends to fall backwards on account of inertia of rest of upper part of the body.

ActivityWhat happens when a quick jerk is given to a smooth thick cardboard placed on a tumbler with a small coin placed on the cardboard ? The coin will fall in the tumbler. Why?

(b) Inertia of motion

Examples:(i) An athlete runs for a while before taking a long jump. The motion gained by the athlete helps him to take a longer jump.(ii) When we switch off a fan, it continues to rotate for a while due to inertia of motion.(iii) A person jumping out of a moving bus in the direction of motion of bus falls forwards. This is because when his foot touches the ground the foot comes to rest, but the upper part of his body in motion, tends to remain in motion.(iv) Suppose we are standing in a moving bus, and the driver stops the bus suddenly. We are thrown forward with a jerk. Let us understand why.As the bus is suddenly stopped, our feet stop due to friction which does not allow relative motion between the feet and the floor of the bus. But the rest of our body continues to move forward due to inertia. That is why we are thrown forward. The restoring muscular forces exerted on our body by our feet come into play and bring the body to rest.(v) When a horse at full gallop stops suddenly, the rider falls forward on account of inertia of motion. 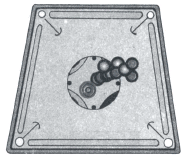 Examples:(i) When a bus suddenly takes a turn, the passengers sitting casually experience a jerk in the outward direction. This happens because the passenger tends to remain in its original direction of motion due to inertia of direction.(ii) Why are mudguards used over the wheels of a vehicle?' This is because the mud sticking in grooves of the tyre fly off tangentially when the wheel moves at a high speed. To protect the rider from this mud, mudguards are used.(iii) Suppose a stone tied to a string is whirled around against in a circle. What happens when the string is cut? The stone flies off tangentially due to inertia of direction. 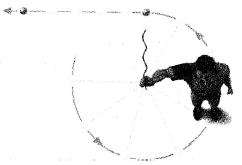 (iv) While sharpening the edge of a knife, it is rubbed against a rotating grinding wheel. ,The sparks produced leave the grinding wheel tangentially due to inertia of direction.

Inertia and MassConsider two stationary objects say a small table and a big table. Now if we apply the same amount of force on these two tables, then it is difficult to move the bigger table than the smaller table. It means, the heavy table oppose more to the change in its state of rest than the light or small table. Thus, greater is the mass, greater is the inertia. Hence, inertia of a body is equal to the mass of the body.

The inertia of an object is measured by its mass, a large mass, such as that of a freight train, indicating a large inertia.

Inertia is the natural tendency of an object to remain at rest or in motion at a constant speed along a straight line. The mass of an object is a quantitative measure of inertia.