The document Newton's Second Law of Motion and Concept of Linear Momentum and Impulse Class 9 Notes | EduRev is a part of the Class 9 Course Science Class 9.
All you need of Class 9 at this link: Class 9

Derivation of the Second Law of Motion

Consider a body of mass m moving with initial velocity u. Let a force F acts on the body for time t. 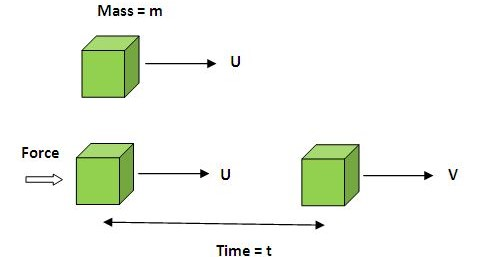 ∴ Rate of change of momentum =

According to the definition of Newton's second law of motion

Therefore, equation (i) can be written as

where k is constant of proportionality,

Thus, force acting on the body is directly proportional to (i) it's mass (m) and (ii) its acceleration (a). Equation (i) gives the mathematical form of Newton's second law of motion

) are vector quantities, whereas mass (m) is a scalar quantity. Therefore, Newton's second law of motion can be written in vector form as

This relation shows that the direction of force applied to the body is same as that of the acceleration produced in the body.

If velocity of a body is constant i.e. u = u, then F = m × 0 = 0Thus, no force is required to move a body with constant velocity or uniform velocity. If u = 0, then u is also zero, it means the body will remain at rest if no external force is applied on the body. This is the first law of motion.

Thus, force is said to be unit force if it products unit acceleration in a body of unit mass.

Definition of Newton (N): The force is said to be 1 newton if it products 1 ms2 acceleration in a body of 1 kg mass. Definition of dyne: The force is said to be 1 dyne if it produces 1 cm s-2 acceleration in a body of 1 g mass.

Definition: The rate of change of momentum of a body with respect to time is directly proportional to the external force acting on the body and takes place in the direction of the force.

Example 1. A cricket player lowers his hands while catching a ball.By doing so the player increases t, the time interval for the change in momentum. Because of this the force experienced by his hands is less. 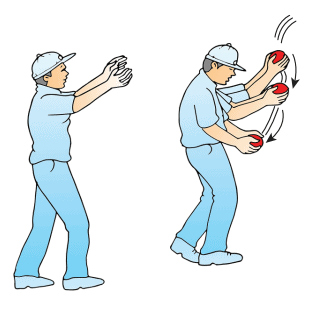 A fielder pulls his hands gradually with the moving ball while catching it.Example 2. A karate player breaks the pile of the tiles or bricks with a single blow.

Example 3. Our hand hurts more when we hit the wall than when we hit a sponge seat of a car.

Ex. It is required to increase the velocity of a scooter of mass 80 kg from 5 to 25 ms-1 in 2 seconds. Calculate the force required.

Ex. Two blocks made of different metals identical in shape and sizes are acted upon by equal forces which cause them to slide on a horizontal surface. The acceleration of the second block is found to be 5 times that of the first. What is the ratio of the mass of the second to the first?

.Thus, the mass of the second block is one-fifth that of the first block.

Ex. An object undergoes an acceleration of 8 ms-2 starting from rest. Find the distance travelled in 1 second.Sol. We are given,Acceleration, a = 8 ms-2Initial velocity, u = 0Time interval, t = 1 sDistance travelled, S = ?Using the equation of motion,

The object travels a distance of 4m.

The forces which act on bodies for short time are called impulsive forces. For example:(i) In hitting a ball with a bat,(ii) in driving a nail into a wooden block by a hammer,

An impulsive force does not remain constant but changes first from zero to maximum and then from maximum to zero. Thus it is not possible to measure easily the value of impulsive force because it changes with time. In such cases, we measure the total effect of the force, called impulse.

Hence impulse of a force is a measure of total effect of the force. It is given by the product of average force and the time for which the force acts on the body; i.e.,Impulse = Change in linear momentumImpulse is a vector quantitySI unit of impulse is N-s and kg ms-1CGS unit = dyne-sec and g cm s-1.

Applications of the Concept of Impulse

1. When a person falls from a certain height on a cemented floor, the floor does not yield. The total change in linear momentum is produced in a smaller interval of time. Therefore, as explained above, the floor exerts a much larger force. Due to it, a person receives more injury.

2. On the other hand, when a person falls on a heap of sand, the sand yields. The same change in linear momentum is produced in much longer time. The average force exerted on the person by the heap of sand is, therefore, much smaller and hence the person is not hurt.

3. China wares and glasswares are wrapped in paper or straw pieces before packing. In the event of fall, impact will take a longer time to reach the glass/chinawares through paper/straw. As a result, the average force exerted on the china or glassware is small and chances of their breaking reduce.

4. The vehicles like scooter, car, bus, truck etc. are provided with shockers. When they move over an uneven road, impulsive forces are exerted by the road. The function of shockers is to increase the time of impulse. This would reduce the force/jerk experienced by the rider of the vehicle.

5. Bogies of a train are provided with the buffers. They avoid severe jerks during shunting of the train.

Due to the presence of buffers, time of impact increases. Therefore, force during jerks decreases. Hence the chances of damage decreases.

8. An athlete is advised to come to stop slowly, after finishing a fast race, so that time of stop increases and hence force experienced by him decreases.

The document Newton's Second Law of Motion and Concept of Linear Momentum and Impulse Class 9 Notes | EduRev is a part of the Class 9 Course Science Class 9.
All you need of Class 9 at this link: Class 9
All Tests, Videos & Notes of Class 9: Class 9 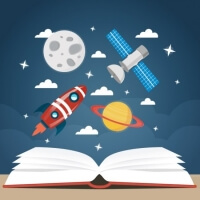