The document Newton's Third Law of Motion Class 9 Notes | EduRev is a part of the Class 9 Course Science Class 9.
All you need of Class 9 at this link: Class 9

Newton's third law of motionDefinition : For each and every action, there is equal and opposite reaction. 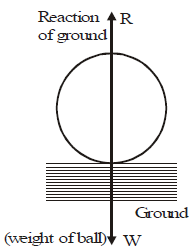 lf a body A exerts force

on another body B, then B exerts a force -

connected by Newton's third law are called action-reaction pair. Any one may be called 'action' and the other 'reaction'.

Action and reaction acts on different bodies hence they never cancel each other.

Note : Action and reactions forces occur simultaneously. It is wrong to think that first action occurs and it is followed by reaction.

An important conclusion :- When action-reaction forces are acting on two bodies of masses mA and mB then From eqn. FAB = -

Misconcept : The action and reaction forces acting on a body are equal and opposite and therefore cancel out the effect of each other.Concept : Action and reaction do not cancel out the effect of each other because they act on different bodies.Misconcept : Any pair of equal and opposite forces is a action-reaction pair.Concept : Only those forces from an action-reaction pair which involve the two bodies responsible for action-reaction.

Some other examples of Newton's third law :1. When a bullet is fired from a gun, we observe recoiling of the gun. The gun acts on bullet i.e., exerts a force on the bullet; simultaneously, the bullet reacts on the gun.

2. While walking or running, you push the ground in the backward direction with your feet. The ground simultaneously exerts a force of equal magnified in the forward direction on feet. This force enables us to walk. 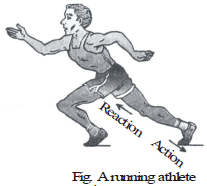 3. When a man jumps from a boat, the boat also experiences a backward jerk. This is due to the action-reaction pair as shown in figure.

4. Inflate a balloon and leave it. You will observe that the balloon moves in opposite direction to the opening in balloon through which the air is coming out.

Law of conservation of momentum We know that if a moving body strikes a body at rest, the moving body slows down and the stationary body starts moving. Whereas the first body loses momentum, the second body gains momentum. We shall observe that the total momentum before impact is equal to total momentum after impact.

If one body gains momentum, the other loses an equal amount of momentum.

Proof of the law of conservation of momentum Consider a system consisting of two bodies A and B of (say glass spheres) masses m1 and m2 respectively. Let these bodies are moving with velocities u1 and u2 as shown in figure. Let u1 > u2. Let these bodies collide with each other for a small interval of time 'dt'. At the time of collision, body A exerts a force F on body B and body B exerts equal and opposite force ( F) on body A. Due to these forces, the momentum of the bodies changes. Let n1 and n2 be the velocities of body A and body B respectively after the collision. 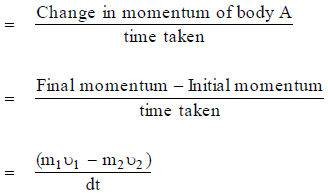 According to Newton's second law of motion, Force acting on body A = rate of change of momentum of body A

Examples to illustrate the law of conservation of momentum1. Recoil of a gun. The recoil of a gun can be explained with the help of the law of conservation of momentum. The bullet inside the gun and the gun itself form a system. Thus, the system is gun bullet. Before firing, the gun and the bullet are at rest, therefore, momentum of the system before firing is zero. When the bullet is fired, it leaves the gun in the forward direction with certain momentum. Since no external force acts on the system, so the momentum of the system (gun bullet) must be zero after firing. This is possible only if the gun moves backward with a momentum equal to the momentum of the bullet. That is, why gun recoils or moves backward figure.

Recoil Velocity. The velocity with which the gun moves backward after firing a bullet is known as recoil velocity.

3. Inflated balloon lying on the surface of a floor moves forward when pierced with a pin. The momentum of the inflated balloon before it is pierced with a pin is zero. When it is pierced with a pin. air in it comes out with a speed in the backward direction. To conserve the momentum, the balloon moves in the forward direction. Newton's second law states that the force is proportional to the product of mass and acceleration. Second definition of 2nd law. The rate of change of momentum is proportional to the impressed force and takes place in the direction of force. Force applied on a body is 1 N if it produces on a mass of 1 kg an acceleration of 1 m s-2. Force applied on a body is 1 dyn if it produces on a mass of 1 g an acceleration of 1 cm s-2. 1 N = 105 dyn.