Classification of Indian LanguagesLanguages in India- classified into following:

Try yourself:Majority of the languages spoken across India belong to -
Explanation

India is home to several hundred languages. Most Indians speak a language belonging to the families of the Indo-Aryan branch of Indo-European (c. 77%), the Dravidian (c. 20.61%), the Austroasiatic (Munda) (c. 1.2%), or the Sino-Tibetan (c. 0.8%), with some languages of the Himalayas still unclassified. The SIL Ethnologue lists 415 living languages for India.

Development of Sanskrit(a) Sanskrit grammar- began with Panini’s book Asthadhyayi, 400 B.C. - oldest book in Sanskrit grammar.(b) Buddhist literature from Mahayana & Hinayana school- in Sanskrit language.(c) Book Mahavastu (Flinayana school) a treasure o f stories; Lalitavistara (most sacred Mahayana text) & Ashvagosha’s Buddhacharita- in Sanskrit.(d) All parts of India (north, south, east, and west) had been affected by Sanskrit language.(e) Chaste form of Sanskrit (refined version of Vedic Sanskrit) - developed between 300 BC to 200 BC.(f) First evidence of use of Sanskrit- inscriptions of Rudradamana at Junagarh in present Southern(g) Gujarat region.(h) Gupta period- use of Sanskrit in poetries.(i) This was a period of creation of pure literature as seen in Mahakavyas (epics) & Khandakavyas semi-epics).(j) This period was called period of unique creation, because a variety of literary works developed during this reign & ornate style was used in literary works.(k) Features of places developed in Gupta period- use of Sanskrit language by characters of high varna & use of Prakrit language by women and shudras.(ii) Middle Indo-Aryan Group

Try yourself:Consider the following statements –
1. The Sanskrit language belongs to the Dravidian group.
2. It is among the 22 languages listed in the Constitution.
Which of the above statement(s) is/are correct?
Explanation

(b) Magadhi Prakrit or Ardha-Magadhi:

Try yourself:Which of the following is the most ancient language of India?
Explanation

Sanskrit : Next in line is Sanskrit, the ancient language of India which can be traced back to 2000BC in its earliest written form. While today only a very small group of people still speak the language, it has had a large influence on several western languages as part of the common Indo—European language root.

Try yourself:Consider the following
1. Prakrit has been derived out of Pali.
2. Pali language is older than Sanskrit
Which of the above statement is/are correct?
Explanation

(a) Ahom, already extinct in India belongs to this group.Austric

Difference between Indo-Arvan Group and the Dravidian Group of Languages

Try yourself:Which of the following did not find its origin from Prakrit language?
Explanation

Try yourself:Consider the following languages:
1. Telugu
2. Tamil
3. Kannada
4. Malayalam
5. Konkani
Which of the above languages belong to Dravidian Group?
Explanation

The Dravidian languages with the most speakers are (in descending order of the number of speakers) Telugu, Tamil, Kannada and Malayalam, all of which have long literary traditions. Smaller literary languages are Tulu and Kodava.
Though it belongs to the Indo-Aryan group, Konkani was influenced by a language of the Dravidian family. A branch of the Kadambas, who ruled Goa for a long period, had their roots in Karnataka.

Objectives of the Mission

Try yourself:Consider the following statements –
1. Tamil is numerically the largest of all Dravidian languages.
2. Telugu is the smallest and youngest of the Dravidian Group.
which of the above is/are correct?
Explanation

ANCIENT SCRIPTS OF INDIA(i) Script- a standard for representing the parts of a spoken language by making specific marks on a medium (Paper, rocks, birch-bark, etc).(ii) Also known as writing system or orthography. It is(iii) Two ancient scripts in India- Brahmi script & Kharosthi script.(iv) Brahmi is the mother of scripts- Because most ancient & modem scripts in India are developed from Brahmi- Devanagari, Tamil, Telugu, Kannada, Odia, Assamese/Bengali, etc.(v) Urdu- written in a script derived from Arabic.(vi) Santhali- independent scripts.(vii) Following are some scripts:Indus Script

(i) Corpus of symbols produced by Indus Valley Civilization.

(iii) Not clear if these symbols constitute a script used to record a language.

Tamil. Of the four literary languages in the Dravidian family, Tamil is the oldest, with examples dating to the early Common Era. In the early 21st century, Tamil was spoken by more than 66 million people, mostly residing in India, northern Sri Lanka, Malaysia, Singapore, Mauritius, Fiji, and Myanmar (Burma).

Brahmi Script(i) Oldest writing systems.(ii)  Used in Indian subcontinent & Central Asia during final centuries BCE & early centuries CE.(iii)  Believed to be derived from contemporary Semitic script or may be Indus script.(iv)  All surviving Indie scripts in South East Asia are descendants of Brahmi.(v) Best-known Brahmi inscriptions- rock-cut edicts of Ashoka in north-central India dated to 250-232 BCE & was deciphered James Prinsep (1837).(vi) Written from left to right.(vii) It is an abugida, that is each letter represents a consonant, while vowels are written with obligatory diacritics called matras in Sanskrit, except when the vowels commence a word.

Try yourself:What is the National language of India?
Explanation 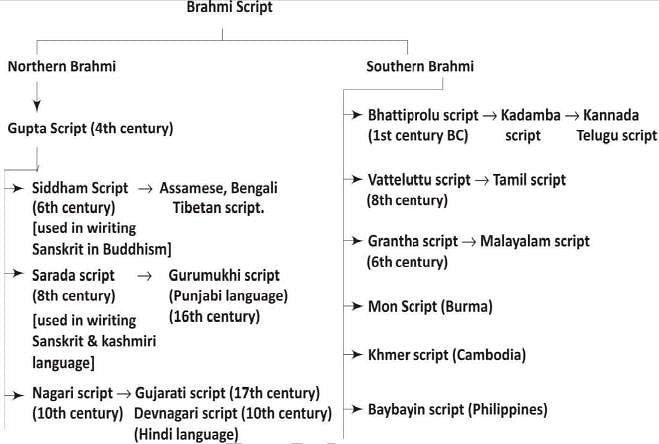 Try yourself:Considering the following –
1. Tamil
2. Telugu
3. Kannada
4. Malayalam
5. Odia
Which of the following have been declared as classical language?
Explanation

(iii) In restricted use in traditional Vedic schools.

(v) Malayalam script- direct descendant of Grantha as are Tigalari & Sinhala alphabets.Sarada Script(i) Sarada or Sharada script- abugida writing system.(ii) Of Brahmic family(iii) Developed around 8th century.(iv) Used for writing Sanskrit & Kashmiri.(v) Its use became restricted to Kashmir, & is now rarely used except by Kashmiri(vi) Pandits for ceremonial purposes.Gurmukhi Script(i) Developed from Sarada script.(ii) Was standardised during 16th century by Guru Angad.(iii) Guru Granth Sahib is written in this script.(iv) Most commonly used by Sikhs & Hindus for writing Punjabi.

Try yourself:Which of the following language is not listed in the Eighth schedule of the Constitution?
Explanation

Devanagari Script(i) Abugida alphabet o f India & Nepal.(ii) Written from left to right.(iii) Is used for over 120 languages, including Hindi, Marathi, Nepali, Pali, Konkani, Bodo, Sindhi & Maithili(iv)  One of the most used & adopted writing systems in the world.(v)  Also used for classical Sanskrit texts.Modi Script(i) Used to write Marathi.(ii) Was an official script to write Marathi until 20th century when Balbodh style of Devanagari script was promoted as the standard writing system for Marathi.(iii) Urdu, Kannada, Gujarati, Hindi & Tamil are also known to have been written in Modi.Urdu Script(i) Right-to-left(ii) Modification of Persian alphabet (derivative of Arabic alphabet in 13th century).(iii) Closely related to development ofNastaliq style of Perso-Arabic script.(iv) Extended form- Shahmukhi script, which is used for writing other Indo-Aryan languages of North Indian subcontinent like Punjabi & Saraiki.(v) Indian literary styles have undergone considerable changes. Spread of Buddhism from India- influenced scripts of Sri Lanka, Tibet & South-East Asia.(vi) Indian writing tradition- also been changed due to advent of Islam in India.

Try yourself:By the 92nd Amendment Act, 2003 which of the following language was not added to the eighth schedule?
Explanation