The document Notes : Constitutional Design, Class 9, CBSE | EduRev Notes is a part of Class 9 category.
All you need of Class 9 at this link: Class 9
CONSTITUTIONAL DESIGN
Nelson Mandela

1. In 1928, Moti Lal Nehru and eight other Congress leaders drafted a constitution for India with the following features - universal adult franchise, right to freedom and equality and to protecting the rights of minorities.
2. In 1931, the resolution at the Karachi session of the Indian National Congress dwelt on how independent India’s constitution should look like with the following features - universal adult franchise, right to freedom and equality and to protecting the rights of minorities.
3. The experience gained by Indians in the working of the legislative institutions of the colonial period proved to be very useful for the country in setting up its own institutions.
4. Indian constitution adopted many institutional details and procedures from colonial laws like the Government of India Act 1935.
5. Our leaders gained confidence to learn from other countries, but on our own terms. Many of our leaders were inspired by the ideals of French Revolution, the practice of parliamentary democracy in Britain, the Bill of Rights in the US and the socialist revolution in Russia.
India’s Constitution was drawn up under very difficult circumstances- How?
1. At that time the people of India were emerging from the status of subjects to that of citizens.
2. The country was born through a partition on the basis of religious differences. This was a traumatic experience for the people of India. At least ten lakh people were killed on both sides of the border in partition related violence.
3. The British had left it to the rulers of the princely states to decide whether they wanted to merge with India or with Pakistan or remain independent. The merger of these princely states was a difficult and uncertain task.
Who were the makers of the Indian Constitution?
1. The drafting of the document called the constitution was done by an assembly of elected representatives called the Constituent Assembly.
2. Election to the Constituent Assembly was held in July 1946. The Constituent Assembly that wrote the Indian constitution had 299 members. Its first meeting was held in December 1946. The Constituent Assembly worked in a systematic, open and consensual manner.
3. First some basic principles were decided and agreed upon. Then a Drafting Committee chaired by Dr. B.R. Ambedkar prepared a draft constitution for discussion.
4. Several rounds of thorough discussion took place on the Draft Constitution, clause by clause. More than two thousand amendments were considered. The members deliberated for 114 days spread over three years.
5. The Assembly adopted the Constitution on 26 November 1949 but it came into effect on January 26, 1950. To mark this day we celebrate January 26 as Republic Day every year.
Why should we accept the Constitution made by this Assembly more than fifty years ago?
1. Over the last half a century, several groups have questioned some provisions of the Constitution. But no large social group or political party has ever questioned the legitimacy of the Constitution itself.
2. The Constituent Assembly was elected mainly by the members of the existing Provincial Legislatures. This ensured a fair geographical share of members from all the regions of the country.
3. The Assembly was dominated by the Indian National Congress, the party that led India’s freedom struggle. But the Congress itself included a variety of political groups and opinions.
4. In social terms, the Assembly represented members from different language groups, castes, classes, religions and occupations.
5. Finally, the manner in which the Constituent Assembly worked gives sanctity to the Constitution. The Constituent Assembly worked in a systematic, open and consensual manner. More than two thousand amendments were considered.
Constituent Assembly Debates:
1. Every document presented and every word spoken in the Constituent Assembly has been recorded and preserved. These are called ‘Constituent Assembly Debates’.
2. When printed, these debates are 12 bulky volumes! These debates provide the rationale behind every provision of the Constitution.
3. These are used to interpret the meaning of the Constitution.
GUIDING VALUES OF THE INDIAN CONSTITUTION:
Understanding of the overall philosophy of our Constitution can be done in two ways: 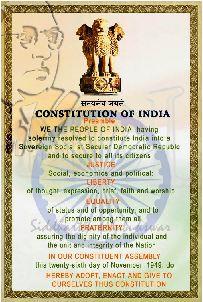 1.   We can understand the overall philosophy of our Constitution by reading the views of some of our major leaders on our Constitution.
2.  Mahatma Gandhi- He had spelt out what he wanted the Constitution to do: An India in which there shall be no high class and low class of people, all communities shall live in perfect harmony, no room for untouchability or the curse of the intoxicating drinks and drugs and women will enjoy the same rights as men.
3.   Dr. B.R. Ambedkar- Who played a key role in the making of the Constitution but he often bitterly criticised Mahatma Gandhi and his vision. In his concluding speech to the Constituent Assembly, he stated his anxiety very clearly. In politics we will have equality and in social and economic life we will have inequality.
4.   Jawaharlal Nehru- In his famous speech to the Constituent Assembly he stated that when the world sleeps, India will awake to life and freedom. Freedom and power bring responsibility. The service of India means the service of the millions who suffer. It means the ending of poverty and ignorance and disease and inequality of opportunity. The ambition of the greatest man of our generation has been to wipe every tear from every eye.
5.   We can understand the overall philosophy of our Constitution by reading the Preamble to the Constitution. The Constitution begins with a short statement of its basic values. This is called the Preamble to the constitution. Preamble of the Indian Constitution guides all the articles of the Indian Constitution.
Offer running on EduRev: Apply code STAYHOME200 to get INR 200 off on our premium plan EduRev Infinity!
Download EduRev app here for Class 9 preparation.