The document Nucleic Acids -Bio-Molecules Chemistry Notes | EduRev is a part of the Chemistry Course Organic Chemistry.
All you need of Chemistry at this link: Chemistry

What do they do?

Two types (depending on the sugar they contain)

1. RNA (Ribonucleic acids): The pentose sugar is Ribose (has a hydroxyl group in the 3rd carbon)

2. DNA (Deoxyribonucleic acids): The pentose sugar is Deoxyribose (has just an hydrogen in the same place). Deoxy = “minus oxygen” 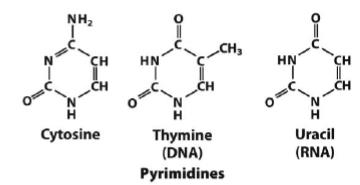 Two polynucleotide strands, running in opposite directions (anti-parallel) and coiled around each other in a double helix. The strands are held together by complementary hydrogen- bonding between specific pairs of bases. Weak forces stabilize DNA. Tertiary Structure of DNA: It is supercoiled. Each cell contains about two meters of DNA. DNA is “packaged” by coiling around a core of proteins known as histones.

The DNA-histone assembly is called a nucleosome. Histones are rich is lysine and arginine residues. 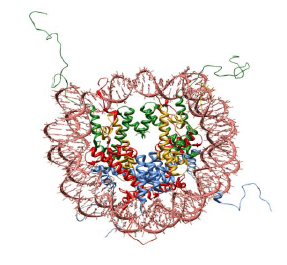 Processes in the transfer of genetic information

1. Replication: Identical copies of DNA are made. DNA is replicated by the coordinated efforts of a number of proteins and enzymes. For replication, DNA must be unknotted, uncoiled and the double helix unwound. Topoisomerase is an enzyme that unknots and uncoils DNA. Helicase is a protein that unwinds the DNA double helix. DNA polymerase is an enzyme that replicates DNA using each strand as a template for the newly synthesized strand. DNA ligase: enzyme that catalyzes the formation of the phosphodiester bond between pieces of DNA. Replication process is semi-conservative: Each new strand of DNA contains one parental (old, template) strand and one daughter (newly synthesized) strand. Unwinding of DNA by helicases is exposed by the DNA bases so that replication can take place. Helicase hydrolyzes ATP in order to break the hydrogen bonds between DNA strands.

RNA polymerase binds to different promoters with different strengths; binding strength relates to the level of gene expression. Eukaryotic genes may also have enhancers.Enhancers can be located at great distances from the gene they regulate, either 5´ or 3´ of the transcription start, in introns or even on the noncoding strand. One of the most common ways to identify promoters and enhancers is to use a reporter gene.

RNA polymerase locally denatures the DNA. The first base of the new RNA strand is placed complementary to the +1 site. RNA polymerase does not require a primer. The first 8 or 9 bases of the transcript are linked. Transcription factors are released, and the polymerase leaves the promoter region.

In eukaryotic cells, the primary RNA transcript must be processed and transported to the cytoplasm before translation (protein synthesis) can begin. The DNA of eukaroytic genes contains noncoding sequences (introns) and coding sequences (exons). Introns must be removed from the RNA transcript by a process called splicing. Additionally a methylguanoisine cap is added to the 5´ end of the transcript, and a polyadenosine tail (polyA) is added to the 3´ end. The 5´ cap aids in transport of the completed mRNA from the nucleus, and the polyA tail helps to determine the stability of the mRNA molecule.

3. Translation: Genetic messages are decoded to make proteins. Translation, or protein synthesis, is directed in eukayotic cells by an mRNA molecule. Translation can be seen to occur in two phases: (1) information transfer, in which RNA base sequence of the mRNA determines the sequence of amino acids and (2) chemical processes, in which the peptide bonds between the adjacent amino acids are formed. The components required for translation include: mRNA, ribosomes, tRNA, aminoacyl tRNA synthetases, and accessory proteins involved in initiation, elongation and termination.

Elongation proceeds until STOP codon reached UAA, UAG, UGA. No tRNA normally exists that can form base pairing with a STOP codon; recognized by a release factor. tRNA charged with last amino acid will remain at P site. Release factors cleave the amino acid from the tRNA. Ribosome subunits dissociate from each other. 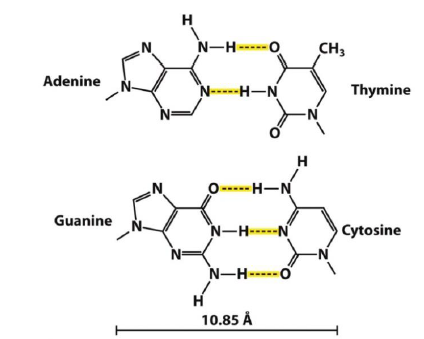 Why does DNA not contain U? 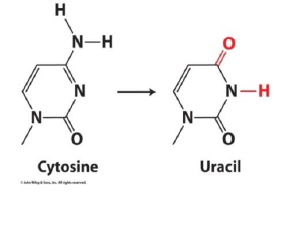 RNA contains ribose rather than 2-deoxyribose and uracil rather than thymine. RNA usually exist as a single strand. There are three major kinds of RNA

disperse in the cell.