The document Ocean Current and types of Currents Notes | EduRev is a part of the UPSC Course Geography for UPSC CSE.
All you need of UPSC at this link: UPSC

Ocean current is a continuous general movement of Ocean Water in a specific direction. As an analogy, you can perceive it as a river flowing over the ocean surface. About 10% of the water in the World’s Ocean is involved in the Surface Currents.

Most surface currents move water in the horizontal and vertical direction in the top layer above the thermocline (The layer where temperature changes steeply). The water beneath the thermocline also circulates, but the movement is very slow.

If you remember, the heat budget was different in the latitudes with heat surplus in the tropics and heat deficit in the arctic region (Beyond 40 degrees N and S).

All the weather phenomenon and circulatory phenomenon transfer heat from the tropics towards the pole and maintain the heat balance. The ocean currents follow the same phenomenon.

A current that moves towards the pole in both the hemispheres is a warm current because it carries warm water from lower latitudes to the upper latitudes.

On the contrary, a current coming from the upper latitudes towards the tropics is a cold current. You need to remember cold and warm ocean currents.

Planetary winds play a vital role in the formation and sustenance of ocean currents. Since planetary winds blow with consistency, over the ocean's surface, they tend to push the water in one direction because of friction. This is the main cause of the flow of water.

This circular motion of water along the periphery of the ocean basin is called Gyre. The following Map will broadly show the formation of different gyres in Oceans. 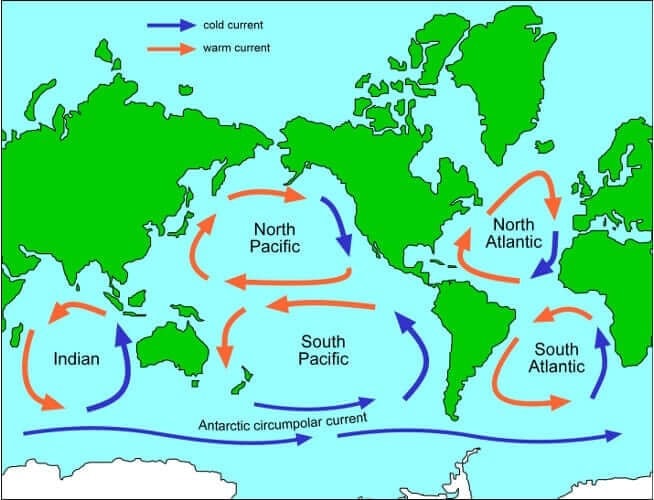 Effect of the temperature

Configuration of the coastline

Note: After hitting a coastline, apart from moving towards North and South, some of the water also moves downward, this is called Downwelling. This water penetrates deep in the ocean and moves parallel to the surface current as an undercurrent and comes out on the other side of the ocean as upwelling. Since this upwelling water comes out from the depth, it is relatively cold and brings a lot of nutrients to the surface. Regions, where upwelling is present, are rich fishing grounds Example: Peru coast. 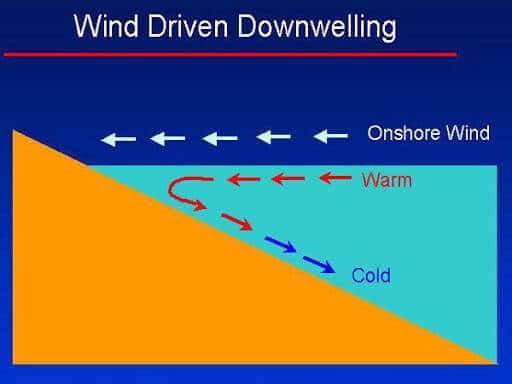 Major hot deserts are located between 20-30 degree latitudes and on the continents' western side. Why?