The document Ocean Relief Features Notes | EduRev is a part of the UPSC Course Geography for UPSC CSE.
All you need of UPSC at this link: UPSC

While there is only one global ocean, the vast body of water, covering 71 percent of the Earth is geographically divided into distinct named regions. The boundaries between these regions have evolved for various historical, cultural, geographical, and scientific reasons.

Historically, there are four named oceans: the Atlantic, Pacific, Indian, and Arctic. However, a new ocean has now been recognized as the Southern (Antarctic) as the fifth ocean. The Pacific, Atlantic, and Indian are known as the three major oceans.

Unlike the continents, the oceans merge so naturally into one another that it is hard to demarcate them. The geographers have divided the oceanic part of the earth into five oceans, namely the Pacific, the Atlantic, the Indian, Southern, and the Arctic. The various seas, bays, gulfs, and other inlets are parts of these four large oceans.

A major portion of the ocean floor is found between 3-6 km below the sea level. The ‘land’ under the oceans' waters, that is, the ocean floor exhibits complex and varied features as those observed over the land.

Try yourself:Telegraph plateau is a part of
Explanation

Telegraph plateau is a part of North Atlantic Ridge.

The oceans' floors are rugged with the world’s largest mountain ranges, deepest trenches, and the largest plains. Like those of the continents, these features are formed by the factors of tectonic, volcanic, and depositional processes.

The ocean floors can be divided into four major divisions:

Besides, these divisions there are also major and minor relief features in the ocean floors like ridges, hills, seamounts, guyots, trenches, canyons, etc.

The continental shelf is the extended margin of each continent occupied by relatively shallow seas and gulfs. It is the shallowest part of the ocean showing an average gradient of 1° or even less.

Their shallowness enables sunlight to penetrate through the water, which encourages plants and organisms → now rich in plankton → fishes to thrive on them → . Hence, continental shelves are the richest fishing grounds.

These plains are covered with fine-grained sediments like clay and silt. 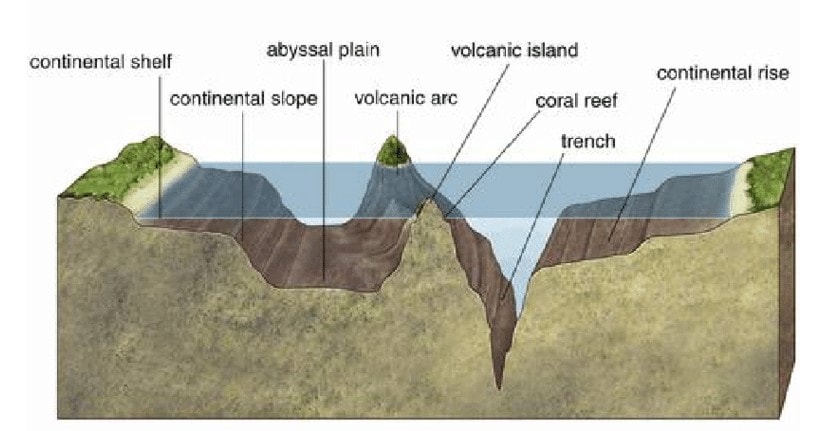 Ocean trenches are steep depressions in the ocean's deepest parts [where old ocean crust from one tectonic plate is pushed beneath another plate, raising mountains, causing earthquakes, and forming volcanoes on the seafloor and land].

➤ The Oceanic deposits of the ocean floor

We have read that rivers erode and deposit some materials in flood plains and drop sediments like sand, silt in the sea. Slow sedimentation – in this process, eroded particles are filtered slowly and settled on one another in layers. Oceanic deposits can be classified on a different basis:

The oozes- The biological deposits of oceans are called Oozes.

Apart from the above mentioned major relief features of the ocean floor, some minor but significant features predominate in different parts of the oceans.

A mid-oceanic ridge is composed of two chains of mountains separated by a large depression. The mountain ranges can have peaks as high as 2,500 m, and some even reach above the ocean’s surface. Iceland, a part of the Mid- Atlantic Ridge, is an example.

It is a mountain with pointed summits, rising from the seafloor that does not reach the ocean's surface. Seamounts are volcanic in origin. These can be 3,000-4,500 m tall. Emperor seamount, an extension of the Hawaiian Islands in the Pacific Ocean, is a good example.

These are deep valleys, some comparable to the Grand Canyon of the Colorado River. They are sometimes found cutting across the continental shelves and slopes, often extending from large rivers' mouths. The Hudson Canyon is the best-known submarine canyon in the world. 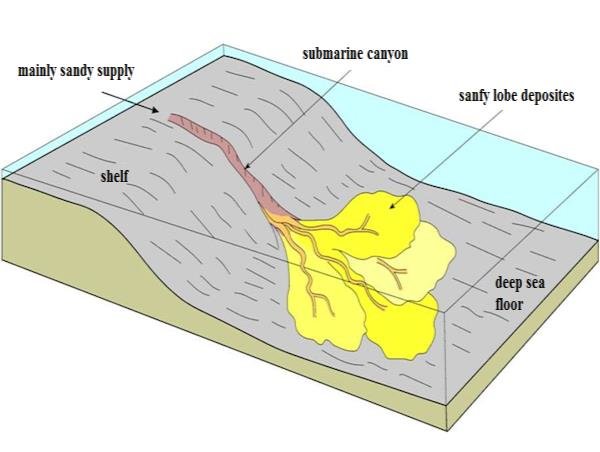 It is a flat-topped seamount. They show evidence of gradual subsidence through stages to become flat-topped submerged mountains. It is estimated that more than 10,000 seamounts and guyots exist in the Pacific Ocean alone. 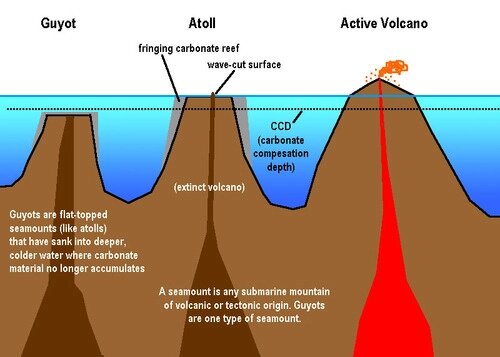 These are low islands found in the tropical oceans consisting of coral reefs surrounding a central depression. It may be a part of the sea (lagoon), or sometimes form enclosing a body of fresh, brackish, or highly saline water. 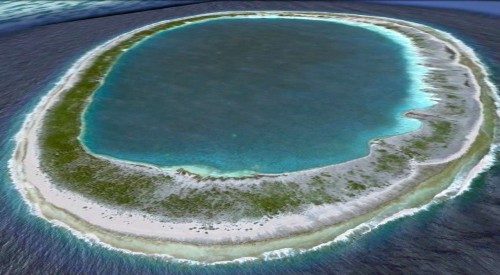 A shoal is a detached elevation with shallow depths. Since they project out of the water with moderate heights, they are dangerous for navigation.

Significance of the Study of Oceanic Relief