The four basics mathematical operations addition, division, multiplication, and subtraction. Now we will understand these operations on both rational and irrational numbers.

Rationalization can be considered as the process used to eliminate a radical or an imaginary number from the denominator of an algebraic fraction. That is, remove the radicals in a fraction so that the denominator only contains a rational number. Let us recall some important terms relating to the concept of rationalization in this section. 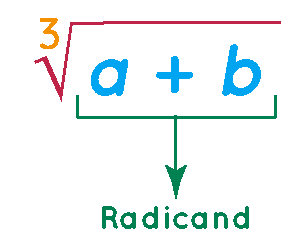 Degree The degree is the number depicted in the figure below. 2 means square root, 3 means cube root. Further, they are referred to as 4th root, 5th root, and so on. If this is not mentioned, we take it as square root by default.

Conjugate A math conjugate of any binomial means another exact binomial with the opposite sign between its two terms. For example, the conjugate of (x + y) is (x - y) or vice versa. Thus, both these binomials are conjugates of each other.

Procedure: 1) Suppose the denominator contains a radical, as in this fraction:a/√ b. Here, the radical must be multiplied and divided by √ b and further simplified.2) For a polynomial with a monomial radical in the denominator, say of the form, a m √ x n , such that n < m, the fraction must be multiplied by a quotient containing a m √ x ( m − n ) , both in the numerator and denominator. This gives us the result a m √ x m , which can be replaced by x and hence free of the radical term.