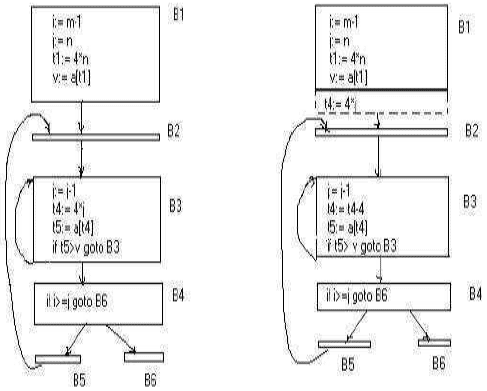 3.2 Common sub-expression elimination: Common sub expressions need not be computed over and over again. Instead they can be computed once and kept in store from where it’s referenced when encountered again – of course providing the variable values in the expression still remain constant.

3.3 Dead code elimination: It’s possible that a large amount of dead (useless) code may exist in the program. This might be especially caused when introducing variables and procedures as part of construction or error -correction of a program – once declared and defined, one forgets to remove them in case they serve no purpose. Eliminating these will definitely optimize the code. 3.4 Renaming of temporary variables:

3.5 Interchange of two independent adjacent statements:Two statementst1:=b+ct2:=x+ycan be interchanged or reordered in its computation in the basic block when value of t1 does not affect the value of t2.