The document Orbitals , Wave Functions and Quantum Numbers Class 11 Notes | EduRev is a part of the Class 11 Course Chemistry for JEE.
All you need of Class 11 at this link: Class 11

In the solution to the Schrodinger equation for the hydrogen atom, three quantum numbers arise from the space geometry of the solution and a fourth arises from electron spin. No two electrons can have an identical set of quantum numbers according to the Pauli exclusion principle , so the quantum numbers set limits on the number of electrons which can occupy a given state and therefore give insight into the building up of the periodic table of the elements.(1) Principal Quantum No. (n) :

(viii) It give variation of radial probability distribution.(2) Azimuthal Quantum No. or Angular momentum Quantum no. (l)Permissible values of l is 0 to (n -1). i.e. value of l is restricted by n.

No. of values of `l' is equal to `n' principal quantum number

It identifies sub shell in an atom

The value of `l' gives name of sub-shell and shape of orbital.

The resulting fine structure which is observed corresponds to two possibilities for the z-component of the angular momentum.

Orbitals:Orbitals are defined as that region or zone in the space where probability of finding electrons is possible (more than 90%). In an atom large no. of permissible orbitals are present. The Postulates of Quantum Mechanics:

It is one of the postulates of quantum mechanics that for a physical system consisting of a particle there is an associated wave function.This wave function determines everything that can be known about the system. The wave function is assumed here to be a single-valued function of position and time, since that is sufficient to guarantee an unambiguous value of probability of finding the particle at a particular position and time.The wave function may be a complex function, since it is its product with its complex conjugate which specifies the real physical probability of finding the particle in a particular state.

probability of finding particle at x at time t provided the wave function is normalized.

The problems associated with the representations of the variations of |Y|2 in space have been circumvented by the following two approaches.

In these diagrams, the shape of an orbital is defined as a surface of constant probability density that encloses some large fraction (say 90 %) of the probability of finding the electron. The probability density is |Y|2. When |Y|2 is constant, so is |Y|. Hence |Y| is constant on the surface for an s orbital (l = 0) has the shape of a spherical shell centered on the nucleus, fig. For each value of n, there is one s orbital. As n increases, there are (n-1) concentric spherical shells like the successive layers in an onion.

These orbitals combine to form subshell.(i) s-subshell will have only one spherical orbital. 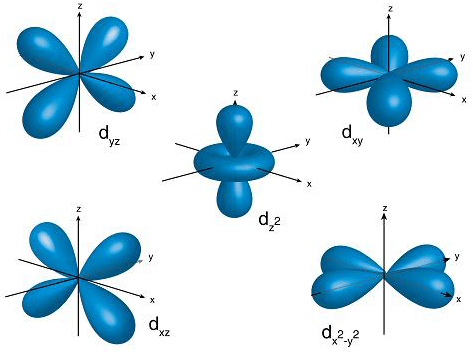