Over-Taking Sight Distance(OSD): OSD is the sight distance which is necessary for a vehicle running at the design speed to overtake a slower moving vehicle without collision with the vehicles coming from the opposite direction. Generally It is not possible to provide the OSD at every cross section of the road so, it is provided after a stretch of the road.Width of the carriage way or the width of the pavement depends on the width of the traffic lane and number of lanes.Width of a traffic lane depends on the width of the vehicle and the clearance. Side clearance improves operating speed and safety. The maximum permissible width of a vehicle is 2.44 and the desirable side clearance for single lane traffic is 0.68 m. This require minimum of lane width of 3.75 m for a single lane road (Figure 1a). However, the side clearance required is about 0.53 m, on either side and 1.06 m in the center. Therefore, a two lane road require minimum of 3.5 meter for each lane (Figure 1b). The desirable carriage way width recommended by IRC is given in Table 1 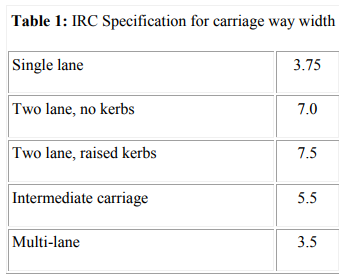 Figure 1: Lane width for single and two lane roadsKerbs Kerbs indicate the boundary between the carriage way and the shoulder or islands or footpaths. Different types of kerbs areLow or mountable kerbs : This type of kerbs are provided such that they encourage the traffic to remain in the through traffic lanes and also allow the driver to enter the shoulder area with little difficulty. The height of this kerb is about 10 cm above the pavement edge with a slope which allows the vehicle to climb easily. This is usually provided at medians and channelization schemes and also helps in longitudinal drainage.Semi-barrier type kerbs : When the pedestrian traffic is high, these kerbs are provided. Their height is 15 cm above the pavement edge. This type of kerb prevents encroachment of parking vehicles, but at acute emergency it is possible to drive over this kerb with some difficulty.Barrier type kerbs : They are designed to discourage vehicles from leaving the pavement. They are provided when there is considerable amount of pedestrian traffic. They are placed at a height of 20 cm above the pavement edge with a steep batter.Submerged kerbs : They are used in rural roads. The kerbs are provided at pavement edges between the pavement edge and shoulders. They provide lateral confinement and stability to the pavement.Road marginsThe portion of the road beyond the carriageway and on the roadway can be generally called road margin. Various elements that form the road margins are given below.Shoulders Shoulders are provided along the road edge and is intended for accommodation of stopped vehicles, serve as an emergency lane for vehicles and provide lateral support for base and surface courses. The shoulder should be strong enough to bear the weight of a fully loaded truck even in wet conditions. The shoulder width should be adequate for giving working space around a stopped vehicle. It is desirable to have a width of 4.6 m for the shoulders. A minimum width of 2.5 m is recommended for 2-lane rural highways in India.Parking lanes Parking lanes are provided in urban lanes for side parking. Parallel parking is preferred because it is safe for the vehicles moving on the road. The parking lane should have a minimum of 3.0 m width in the case of parallel parking.Bus-bays Bus bays are provided by recessing the kerbs for bus stops. They are provided so that they do not obstruct the movement of vehicles in the carriage way. They should be at least 75 meters away from the intersection so that the tra c near the intersections is not a ected by the busbay.

Service roads Service roads or frontage roads give access to access controlled highways like freeways and expressways. They run parallel to the highway and will be usually isolated by a separator and access to the highway will be provided only at selected points. These roads are provided to avoid congestion in the expressways and also the speed of the tra c in those lanes is not reduced.Cycle track Cycle tracks are provided in urban areas when the volume of cycle tra c is high Minimum width of 2 meter is required, which may be increased by 1 meter for every additional track.Footpath Footpaths are exclusive right of way to pedestrians, especially in urban areas. They are provided for the safety of the pedestrians when both the pedestrian tra c and vehicular tra c is high. Minimum width is 1.5 meter and may be increased based on the tra c. The footpath should be either as smooth as the pavement or more smoother than that to induce the pedestrian to use the footpath.Guard rails They are provided at the edge of the shoulder usually when the road is on an embankment. They serve to prevent the vehicles from running o the embankment, especially when the height of the ll exceeds 3 m. Various designs of guard rails are there. Guard stones painted in alternate black and white are usually used. They also give better visibility of curves at night under headlights of vehicles.Width of formation Width of formation or roadway width is the sum of the widths of pavements or carriage way including separators and shoulders. This does not include the extra land in formation/cutting. The values suggested by IRC are given in Table.Table : Width of formation for various classed of roadsRoad                   Roadway width in m 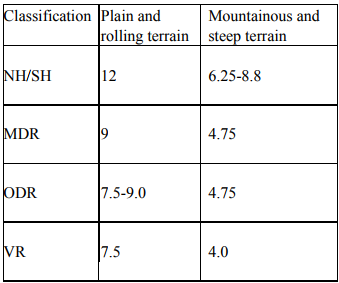