The document Overview (Part 4): Metals And Non-metals Notes | EduRev is a part of the Class 10 Course Science Class 10.
All you need of Class 10 at this link: Class 10

Elements or compounds which occur naturally in the earth’s crust are known as minerals. Minerals from which metals can be extracted profitably are called ores. Seawater also contains some soluble salts such as sodium chloride, magnesium chloride, etc. 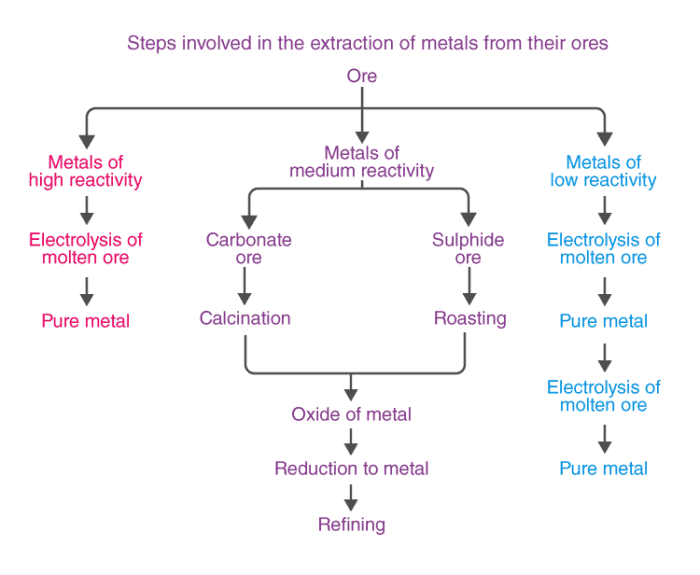 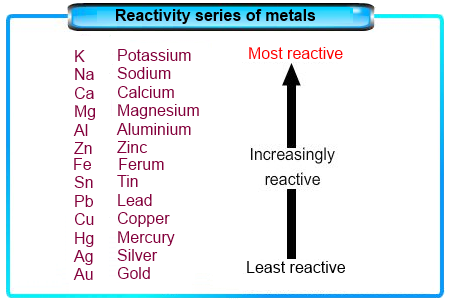 Ores of many metals are oxides. This is because oxygen is a very reactive element and is very abundant.Different techniques are to be used for obtaining the metals falling in each category Several steps are involved, in the extraction of pure metal from the ores. Summary of these steps is given in the figure below.

Ores are generally contaminated with impurities, such as soil, sand, etc., called gangue. These impurities must be removed from the ores before proceeding to extraction. The method used for removing gangue depends upon the physical and chemical properties of the gangue and the ore.

Such metals are very unreactive. For example, cinnabar (HgS) is an ore of mercury. When heated, it is first converted to mercury oxide which on further heating changes to metallic mercury.

Similarly, copper which occurs in nature as Cu2S can be obtained by just heating in air.

Extracting metals in the middle of the activity series

Such metals (Fe, Zn, Pb, Cu, etc.) are usually present in the form of sulphides and carbonates, which are both converted into oxide first.

The metal oxides are then subjected to reduction with carbon.

Reduction can also be brought about by reactive metals like sodium, calcium, aluminium etc. When manganese dioxide is heated with aluminium, the following reaction takes place:

In the above reaction, Mn is getting reduced while Al is getting oxidised. Al is higher on the activity series than Mn.

The amount of heat evolved is so large that the metal is obtained in the molten state.Thermit process

Extraction of metals towards the top of activity series

Aluminium is obtained by electrolytic reduction of aluminium oxide.Refining of metals

Metals such as copper, zinc, tin, nickel, silver, gold, etc., are refined electrolytically. In this process, impure metal is made anode and a thin strip of pure metal is made the cathode. A solution of metal salt is used as the electrolyte. The apparatus is shown in the figure below. 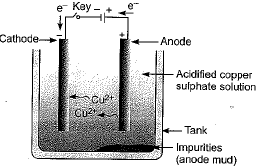 (i) Silver articles turn black when exposed to air. This is because it reacts with hydrogen sulphide in air to form silver sulphide which is black.(ii) Similarly copper articles turn green due to reaction with atmospheric carbon dioxide form in g green copper carbonate.(iii) Iron gets rusted when exposed to moist air form brown oxide of iron.These are all examples of rusting.Activity II. Perform an experiment to find out conditions which cause rusting of iron. Materials required: Three test tubes with corks, iron nails, anhydrous calcium chloride, oil.Procedure: (1) Take three test tubes. Place iron nails in each of them. 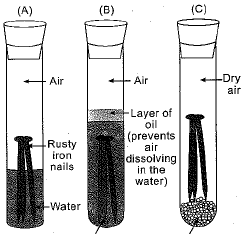 Investigating the condition under which iron rusts. In tube A, both air and water are present. In tube B, there is no air dissolved in the water. In tube C, the air is dry.

(3) Pour some water in test tube A and cork it.

(4) Pour boiled water in test tube B. Add 1 mL of oil and cork it. The oil will form the upper layer and prevent the air from dissolving in water.

(6) Leave these test tubes for a few days.

This means presence of both water and air necessary for rusting to take place.Prevention of corrosion

It is a method of protecting steel and iron from rusting. The article is coated with a thin layer of zinc. Galvanised article is protected against rusting even if zinc coating is broken.

It is a method of improving the properties of a metal. If iron is mixed with a small amount of carbon (about 0.05 %), it becomes hard and strong. When iron is mixed with nickel and chromium, we obtain stainless steel which is hard and does not rust.An alloy is a mixture of two or more metals, or a metal and a non-metal. It is prepared by first melting the primary metal and then dissolving the other elements in a definite proportion. It is then cooled at room temperature.