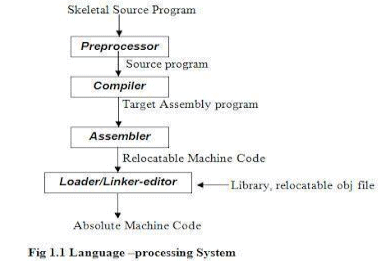 1.1 PreprocessorA preprocessor produces input to compilers. They may perform the following functions.1. Macro processing: A preprocessor may allow a user to define macros that are short hands for longer constructs.2. File inclusion: A preprocessor may include header files into the program text.3. Rational preprocessor: these preprocessors augment older languages with more modern flow-of-control and data structuring facilities.4. Language Extensions: These preprocessor attempts to add capabilities to the language by certain amounts to build-in macro1.2 CompilerThe compiler is a translator program that translates a program written in (HLL) the source program and translates it into an equivalent program in (MLL) the target program. As an important part of a compiler is error showing to the programmer.

Executing a program written n HLL programming language is basically of two parts. the source program must first be compiled translated into an object program. Then the results object program is loaded into a memory executed.

Languages such as BASIC, SNOBOL, LISP can be translated using interpreters. JAVA also uses interpreter. The process of interpretation can be carried out in following phases.1. Lexical analysis2. Syntax analysis3. Semantic analysis4. Direct ExecutionAdvantages: Modification of user program can be easily made and implemented as execution proceeds.

1.5 Loader and Link-editor: Once the assembler procedures an object program, that program must be placed into memory and executed. The assembler could place the object program directly in memory and transfer control to it, thereby causing the machine language program to be executed. This would waste core by leaving the assembler in memory while the user’s program was being executed. Also, the program would have to retranslate his program with each execution, thus wasting translation time. To overcome this problem of wasted translation time and memory. System programmers developed another component called loader.“A loader is a program that places programs into memory and prepares them for execution.” It would be more efficient if subroutines could be translated into object form the loader could ”relocate” directly behind the user’s program. The task of adjusting programs o they may be placed in arbitrary core locations is called relocation. Relocation loaders perform four functions.

1.6 TRANSLATOR  A translator is a program that takes as input a program written in one language and produces as output a program in another language. Beside program translation, the translator performs another very important role, the error-detection. Any violation of d HLL specification would be detected and reported to the programmers. Important role of translator are:1 Translating the hll program input into an equivalent ml program.2 Providing diagnostic messages wherever the programmer violates specification of the hll.1.6.1TYPE OF TRANSLATORS:-