The document Overview of Periodic Classification of Elements (part -1) Class 10 Notes | EduRev is a part of the Class 10 Course Science Class 10.
All you need of Class 10 at this link: Class 10

1. At present, 118 elements are known to us. Out of these only 94 elements are naturally occurring. To study the elements properly, it is necessary to organise all the elements. As different elements were being discovered, scientists gathered more and more information about the properties of these elements. Then attempts were made to organise the elements based on these properties. The earliest attempts to classify the elements resulted in grouping the then elements as metals and non-metals.2. Dobereiner’s Triads: In the year 1817, Johann Wolfgang Dobereiner, a German chemist identified certain triads having three elements each. He showed that when three elements in triad were written in order of increasing atomic masses, the atomic mass of the middle element was roughly the average of the atomic masses of the other two elements.
Thus, in the triad Li, Na and K, the atomic mass of Na(23) is the average of atomic masses of Li and K [(6.9 + 39)/2 ≈ 23]. He could identify only three triads which are given below :

3. Newlands’ Law of Octaves: In 1866, John Newlands, an English scientist, arranged the elements known till that time in the order of increasing atomic masses starting from hydrogen and ended at thorium which was the 56th element. He found that every eighth element had properties similar to that of the first. He compared it to the octaves found in music and named this law as Law of Octaves. Sodium is eighth element after lithium. The properties of the two are similar. Similarly, beryllium and magnesium resemble each other. A part of the original form of Newlands’ octaves is given in the following table:

Shortcomings of Newlands’ Octaves Law:(1) It was found later that law of octaves was applicable only upto calcium. After that every eighth element did not possess properties similar to the first.(2) Newlands assumed that no new elements would be discovered in future. Actually new elements were discovered which did not fit into Newlands table.(3) To fit elements in his table, Newlands adjusted two elements in the same slot, but also put some unlike elements in the same column. For example, Co and Ni having different properties from those of F, Cl, Br have been placed in the same column.4. Mendeleev’s Periodic Table: When Mendeleev started his work, only 63 elements were known. He examined the relationship between atomic masses of the elements and their physical and chemical properties. He concentrated on the compounds formed by elements with hydrogen and oxygen, among chemical properties.
Formulae of hydrides and oxides were treated as basic criteria for classification of elements. It was observed that periodic recurrence of elements with similar physical and chemical properties was obtained. According to Mendeleev’s Periodic Law:

The properties of elements are a periodic function of their atomic masses.Mendeleev’s original periodic table is reproduced in the table below: 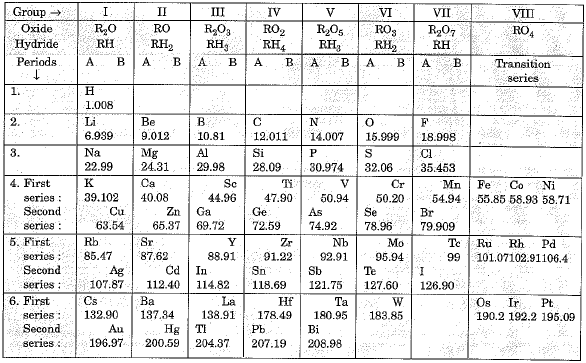 The vertical columns in the table are called ‘groups’ while the horizontal rows are called ‘periods’.Mendeleev’s Periodic Table was published in a German journal in 1872.In the formulae for oxides and hydrides written at the top of the columns, the letter ‘R’ is used to represent any of the elements in the group. For example, the hydride of carbon, CH4, is written as RH4 and the oxide C02 as RO2.5. Achievements of Mendeleev’s Periodic Table: While framing the periodic table, Mendeleev placed an element with slightly greater atomic mass before an element with slightly lower atomic mass. For example, Co (58.9) appears before Ni (58.71). This was done to arrange similar elements together in the same vertical column. Another such anomaly in the table is that of Al and Si.
Mendeleev predicted the existence of some elements that had not been discovered till then and he left some gaps in the table for such elements. Such undiscovered elements were named by prefixing Sanskrit numeral Eka (one) to the name of the preceding element.For example, scandium, gallium and germanium, discovered later, have properties similar to Eka-boron, Eka-aluminium and Eka-silicon. This provided convincing evidence for the correctness and usefulness of Mendeleev’s Periodic Table. Noble gases which were discovered much later were placed in a separate group without disturbing Mendeleev’s Table.6. Limitations of Mendeleev’s classification: Mendeleev’s classification suffers from some limitations :(i) One limitation of Mendeleev’s classification is that it could not assign a position to hydrogen. Hydrogen resembles alkali metals in the combination with halogens, oxygen and sulphur. On the other hand, hydrogen resembles halogens in that it exists as a diatomic molecule and it combines with metals and non-metals to form covalent compounds.(ii) Mendeleev’s classification cannot assign position to isotopes. Isotopes are atoms of an element having similar chemical properties, but different atomic masses.7. Modem Periodic Table: Henry Moseley in 1913 showed that atomic number of an element is a more fundamental property than its atomic mass. Thus, the Mendeleev’s Periodic Law was modified. The Modern Periodic Law may be stated as :Properties of elements are a periodic function of their atomic number.
It was found that properties of elements could be predicted with greater accuracy when the elements were arranged on the basis of increasing atomic number. Modem Periodic Table is given on next page.
(i) Positions of cobalt and nickel was resolved in the light of new classification of elements based on atomic number. Cobalt and nickel have atomic numbers 27 and 28 respectively. Naturally cobalt with atomic number 27 has to be placed first followed by nickel.(ii) As the isotopes possess the same atomic number, according to Modern Periodic Law, they have to be given the same position in the Periodic Table.(iii) Unlike atomic mass, atomic number is always a whole number. Hence, we cannot have an element with fractional number 1.5 placed between hydrogen and helium.(iv) Although hydrogen has resemblance both with elements of alkali metals and halogen, it has been decided to place it over lithium in the alkali metal group.