(1) N2 is a colourless odourless gas insoluble in water.

(2) It is absorbed by heating with Mg and Al. The nitrides formed thus react with water to form NH3.

(3) Reaction with H2 at 200 atm and 500 °C and in the presence of iron catalyst and molybdenum promotes N2 combination with H2 reversibly to form ammonia. The process in called Haber’s Process and is the industrial method of manufacturing ammonia. The reaction is exothermic.

(4) Reaction with oxygen: When air free from CO2 and moisture is passed over an electric are at 2000-3000°C nitric oxide is formed. This reaction its endothermic.

1. Oxides of nitrogen are all oxidizing a gents.

2. (a) N2O is isoelectronic with CO2 and also has linear structure. However, unlike CO 2, N2O has a small dipole moment.

(b) No has total of 15 electrons. This is an odd electron molecule. In the gaseous state, it is paramagnetic. However the liquid and the solid states are diamagnetic because lose dimmers are formed canceling out the magnetic effects of unpaired electrons.

The bonding in NO is best described by the molecular orbital theory. Its electronic configuration is

This gives a bound order of 2.5. If the u npaired electron occu pying he a nti bonding π*2py orbital is removed, nitrosonium ion NO+ is formed and bond order becomes 3. This is reflected in the thortning of the bond length from 115 pm in NO to 106 pm in NO+. Nitrosonium ion is stable and forms salts like NO+Cl-. It is isoelectronic with CO and forms complexes with transition elements. The brown ring formed in the test for nitrates is due to the formation of a complex of iron [Fe(H2O)5NO]2+

(c) NO2 with 23 electrons is aga in an odd electron molecule. In the gaseou s state it is para magnetic. On cooling, the gas condenses to a brown liquid and eventually to a colourless solid both of which are diamagnetic due to dimerisation. NO2 molecule is angular with ONO angle of 134°. The O —N bond length is 120 pm. Intermediate between a single and double bond. The odd electron is o nitrogen. The dimer has been shown to have a linear structure. The N—N bond length is very large 174 cm making this a very weak bond liquid N2O4 undergoes self-ionizatin to form NO+ and NO3– ions and (therefore it has been extensively studied as a non-aqueous solvent

NO: (a) Oxidizing properties (Reduction of NO)

(b) Reducing properties (oxidation of NO):

NO2: It behaves both like HNO2 as a reducing agent and like HNO3 as an oxidizing agent according to following reactions respectively.

(i) Nitrous acid and nitrites are good oxidizing agents and covert iodides to iodine, ferrous salts to ferric stannous to stannic and sulphites to sulphates eg.

(ii) With strong oxidizing a gents like KMnO4, nitrou s a cid a nd nitrites function a s redu cing agents a nd get oxidized to NO3– ions

HNO3 is exclu sively manu factured by the Ostwald process. In this process NH3 is catalystically oxidized to NO over a Pt—Rh catalyst at 1200 K

The mixture is then diluted with air NO combine s with O2 to give NO2 which is absorbed in water to give HNO3 and NO which is then recycled.

It is a very reactive non-metal. It catches fire in air. It occurs in nature in the form of stable phosphates. The important minerals are:

(i) WHITE OR YELLOW PHOSPHORUS (P4)

(1) It is white-too-transparent and soft waxy solid

(3) It glows in dark due to slow oxidation producing yellowish-green light. This phenomenon is called phosphorescence.

(5) It runs yellow after some time, it is called yellow phosphorus.

(6) It undergoes oxidation in the presence of air which slowly rises its temperature and due to its low ignition temperature (30°C) after a few moments it catches fire spontaneously. Due to this reason it is stored under water.

It is also prepared by heating white phosphorus with a few crystals of iodine catalyst at 250°C under high pressure.

It is red crystalline solid having a density of 2.2 g/cc. It is less reactive then white phosphorus and does not dissolve in liquid CS2. It does not catch fire at room temperature because its ignition temperature is 260°C. It is a polymeric substance forming linear chains like this.

When white phosphorus is heated at about 200°C under very high pressure then black phosphorous is produced.

It is an electrical conductor resembling graphite in this respect and also in its flakiness and luster. It is often called metallic phosphorous. Its density (2.69 g/cc) is higher than of red phosphorous. It is insoluble in CS2. It has layered structure like graphite.

This variety is obtained by heating white phosphorus with a trace of sodium at 230°C under high pressure. It is crystalline in structure.

Reactivity of the various allotropic forms of phosphorus towards other substances decreases in the order.

Brown > white > red > black, the last one being almost inert & thermodynamically most stable form of phosphorus.

(i) Action of air: White phosphorus burns in air to form phosphorus trioxide and pentoxide.

Red and other forms of phosphorus also burn in air or oxygen but on heating.

Despite the existence of pentahalides no hydrides MH5 are k nown. To attain the five valent state, d orbitals must be used. Hydrogen is not sufficiently electronegative to make the d orbitals contract sufficiently, through PHF4 and PH2F3 have been isolated.

(v) Action of NaOH: When white phosphorus is heated with NaOH solution, phosphine gas is evolved.

(vi) Action of conc. HNO3/H2SO4: When heated with conc. HNO3 phosphorous is oxidized to H3PO4.

It is prepared by burning phosphorus in a limited supply of oxygen when gaseous P4O10 and P4O6 are formed.

It is obtained by burning phosphorous in air.

(i) It is a white powder acidic in nature and is the anhydride of orthophosphoric acid. Its empirical formula is P2O5 and its molecular formula is P4O10.

(iii) Dehydrating power: It dehydrates conc. H2SO4 and cocnc. HNO3 to SO3 and N2O5 respectively. 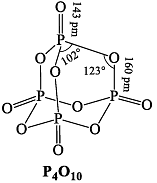 (i) By dissolving P2O3 in water

(ii) By hydrolysis of PCl3 with water.

(ii) It is a weak acid and reducing a gent.

(v) It is a strong reducing agent

(iii) Neutralization with alkalis or bases:

These polymers are also called inorganic rubbers. These compounds are can be represented by the General structure,

Structure of (NPCl2)3 molecule: X-ray analysis has shown that (NPCl2) molecule has a planar sixmembered ring structure (Structural) in which each N -atom is sp2 hybridized and each P-atom is sp3 hybridized. The lone pair of electrons on each N -atom resides in one of the three sp2 hybrid orbitals. It is this lone pair of electrons which makes (NPCl2)3 molecule to show basic properties. The bond angles are as shown in the structure. Resonance structure can also be drawn as in case of C6H6 molecule, indicating aromaticity in the ring. 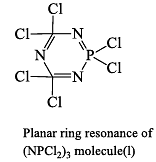 Unlike benzene which involves extensive (pπ- pπ) bonding. (N3P3Cl6) molecule involves (dπ-pπ) bonding. The extent (dπ-pπ) bonding appears to be quite appreciable as the N—P distance (1.6 Å) is considerably shorter than the N—P single bond distance (1.75-7.80 Å). Whether there is complete delocalization of π-electron charge cloud on all the ring a to ms as in C6H6 molecule or there are intensely-localized islands of the electron cloud within the PNP segments cannot be answered with certainity.

Structure of (NPCl2)4 molecule: This molecule has a tube-like puckered structure.

These are formed by heating H3PO4, B2O3 and alkali metal carbonates or oxides at 700 °C. Borophosphate glasses are of the following three types. (i) Those which contain excess of alkali over P2O5 in this variety all the B atoms are present a s trigonal BO3 groups.

(iii) Those which contain P2O5 and alkali in equivalent proportions. The number of coordinated B -atoms decreases steadily with the increase in the content of B2O3 and becomes almost zero at about 47 mole per cent of B2O3.

Structure of borophosphate glass having three and four coordinate B atoms are shown below in following figure. 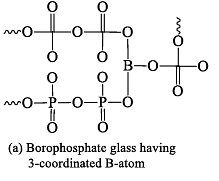 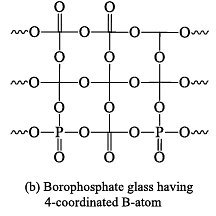