The elements in which the last electron enters the outermost p orbital are called p-block elements. 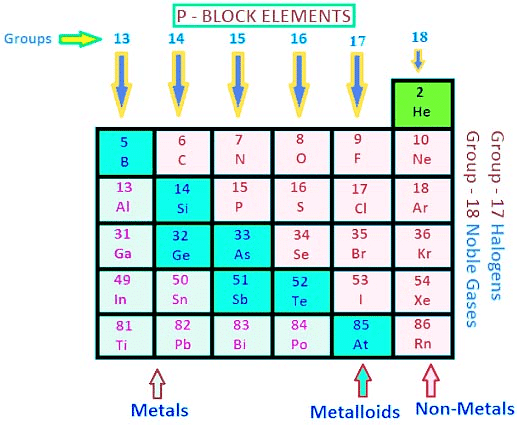 The oxyacids of boron are:

Orthoboric acid H3BO3 behaves as a weak monobasic acid it does not donate protons but rather accepts OH–. It is therefore a Lewis acid B(OH)3. Due to sp2 hybridization of boron, boric acid is a planar molecule and due to H-bonding between different molecules boric acid has a layer structure.

H3BO3 is soluble in water and behaves as weak monobasic acid. It does not donate protons like most acids, but rather it accepts OH–. It is, therefore, a Lewis acid (B(OH)3) 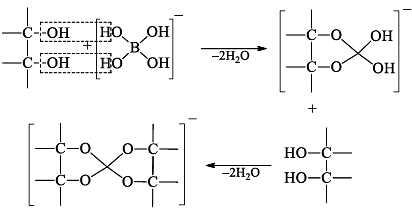 When boric acid is heated with ethyl alcohol, the evolved gas vapours of ethylborate is burned forming a green-edged flame.

(ii) When borax powder is heated, it first swells due to loss of water in the form of steam but at 740°C it becomes converted into colourless transparent borax bead.

Binary compounds of B with H are called boron hydrides of boranes. These compounds form following two types of series.

Pyrolysis of B2H6 in sealed vessels at temperatures above 375 K is an exceedingly complex process producing a mixture of various boranes e.g. B4H10, B6H12 and B10H14

Carbaboranes are compounds of carbon, boron, and hydrogen in which carbon and born atoms occupy the vertices of a triangulated polyhedron. The compounds may be considered to have been derived from boranes by the replacement of BH– units by CH units. The carboranes and the boranes having the same number of electrons in their bonding, framework have similar skeletal structures. Three structurally different types of carboranes, namely, closo, nido and arachno are known at present.

This compound is isoelectronic with benzene and hence has been called Inorganic Benzene.

Borazine can be prepared by the following methods.

(iii) By heating mixture of LiBH4 and NH4Cl (Laboratory method):

(a) One molecule of B3N3H6 add three molecules of HCl or HBr in the cold, without a catalyst. These molecules get attached with all the three B -atoms, of B3N3H6 molecule, since B -atom is more negative than N-atom in B—N or B=N bond and hydrogen chloride derivative (B3N3H9Cl) is obtained. This addition reaction is not shown by benzene.

(a) Borazine gets slowly hydrolyzed by water to produce boric acid [B(OH)3 or H3BO3], NH3, and H2. Hydrolysis is favoured by the increase in temperature.

(b) It is reported that under proper conditions, borazine reacts with three molecules of water and gives B -trihydroxyl borazine, B3N3H3(OH)3 (substitution reaction).

(iii) Pyrolysis: When borazine is pyrolyzed above 340°C, B6N6H10 and  B5N5H8 are produced. These products are boron-nitrogen analogs of diphenyl and naphthalene respectively

(v) Formation of adduct: Borazine forms an adduct with CH3OH. This adduct undergoes pyrolysis with the elimination of H2 and gives B-trimethoxy-borazine.

Boraxine exhibits the aromatic properties of benzene. Boraxine is even less stable and presumably has less p-delocalization than borazine. In this molecule, B—O bond distance is equal to 1.38 Å. The characteristic Roman frequency of the ring is at 8.7 cm-1. B=O, double bond present in the structure is due to the donation of a lone pair of electrons from O-atom to boron atom. This results in the development of a formal negative charge on B-atom and equal formal positive charge on O-atom.

This compound can also be prepared by reducing Monomethyl ammonium chloride. (CH3)NH3Cl with lithium borohydride LiBH4.

(i) Action of air: Dry air has no action of Al. But moist air forms a thin layer of Al2O3 on its surface and it loses its luster. At very high temperatures it burns to form Al2O3 and AlN.

AlN reacts with hot water to form Al(OH)3 and NH3.

It is a white amorphous powder insoluble in water but soluble in acids (forming eg., AlCl3) as well as alkalies (forming NaAlO2). Thus amphoteric in nature. It is a polar covalent compound.

It is a colorless crystalline solid, soluble in water. It is anhydrous AlCl 3 is a deliquescent white solid.

Aluminum halides are dimers in the gas phase: aluminum chloride has the molecular formula Al2Cl6 in the vapour. Each Al atom acts as an acid towards a Cl atom initially belonging to the other Al atom. Aluminum chloride is widely used as a Lewis acid catalyst for organic reactions.

Alkyl aluminum dimers are similar in structure to the analogous dimeric halides but the bonding is different. In the halides, the bridging Al—Cl bond involves an electron pair. In the alkyl aluminum dimers, the Al—C—Al bonds are longer than the terminal Al—Cl bonds, which suggests that they are 3c—2e bonds, with one bonding pair shared across the Al—C—Al unit, somewhat analogous to the bonding in diborane, B2H6.

It is a white amorphous powder insoluble in water but soluble in acids (forming eg., AlCl3) as well as alkalies (forming NaAlO2). Thus amphoteric in nature. It is a polar covalent compound.