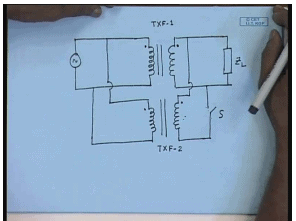 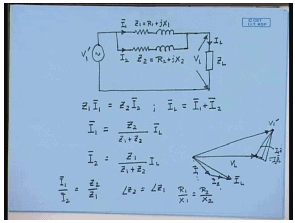 The equivalent circuit of the first transformer with respect to the load side can be shown to be like this; we have derived this before. Let us say this series impendence is Z 1 equal to R 1 plus j X 1. Since, the secondary transformer, the second transformer input are and output are connected to the same source and the same load; effectively the series impendence of the second transformer will come in parallel to the first transformer.Therefore, the total equivalent circuit of the parallel connected transformers can be represented something like this. So, this is Z 2 equal to R 2 plus j X 2. Let us say the total current drawn by the first transformer is I 1; the current drawn by the second transformer is I 2 and total load current is I L. Then one can easily derive that Z 1 I 1 equal to Z 2 I 2 and I L equal to I 1 plus I 2. Therefore, in terms of I L, I 1 equal to Z 2 divided by Z 1 plus Z 2 into I L and I 2 equal to Z 1 divided by Z 1 plus Z 2 I L.Now, let us try to see the phasor relationship between these currents and voltages. Let us say this is the load voltage phasor V L and this is the load current phasor I L. The vector sum of phasor sum of I 1 and I 2 is equal to I L. So, let us say this is I 1 and this is I 2. Then from this equivalent circuit we can show, this is V 1 dash. Similarly, this is equal to I 1 Z 1 equal to I 2 Z 2. This is how the phasor diagram will look like. Now, it is obvious from the phasor diagram that the current in the 2 transformers will be minimum when I 1 and I 2 are in same phase; because then I L will be the algebraic sum of I 1 and I 2. Therefore, one thing we can immediately say that one desirable condition for parallel connected transformer is that, when they are connected in parallel the currents drawn by them are in phase. That will happen only if; if I 1 and I 2 are to be in parallel, then I 1 by I 2 is equal to Z 2 by Z 1.Therefore, if I 1 and I 2 have to be in phase, then the ratio of I 1 by I 2 will be a scalar and that will happen only if angle of Z 2 is equal to angle of Z 1. That is the ratio of R 1 by x 1 is equal to R 2 by x 2. So, this is a desirable condition; although not essential. This will ensure that for a given transformer current rating, the maximum load current can be supplied.(Refer Slide Time: 15:05) 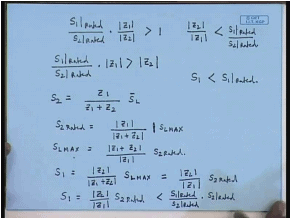 This thing can be written as into mod Z 1 by mod Z 2 larger than 1 or S 1 rated by S 2 rated into Z 1 is greater than Z 2. In which case, it can be easily shown that it is a second transformer which will share more load and reaches rated KVA earlier. Because we have seen, S 2 to be Z 1 divided by Z 1 plus Z 2 into S L. 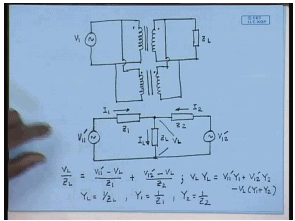 Again, this is the first transformer; the second transformer again is connected parallel to it with appropriate polarity. Now, these 2 transformer primaries are connected to the same source, but their induced voltages are slightly different. That is because their trans ratios are not exactly same. So, if we want to draw a equivalent circuit of this situation; then we must recognize that now this impendence will not exactly be connected in parallel. But for the first transformer we can still draw the equivalent circuit with respect to the load side. So, this will be V 1 1 dash; that is with respect to the secondary of the first transformer. This is the impendence of the first transformer series and this is the load impedance.Similarly, we can draw the equivalent circuit of the second transformer. Now, since their trans ratio is different, the applied source referred to the secondary side of the second transformer will not be V 1 1 dash, but it will some other voltage V 1 2 dash; but they will be connected on the load side. Again, let us say this current is I 1, this current is I 2 and this is the total load current I L. So, this will be the equivalent circuit of the parallel connected transformer, when their no load voltages are not identical.The problem is to find out the individual currents I 1 and I 2 contributed by the transformer when the total load current is I L. In order to achieve that, we can write the node voltage equation at this point. Assuming this voltage to be V L, we can write V L divided by Z L equal to V 1 1 dash minus V L by Z 1 plus V 1 2 dash minus V L by Z 2. Or V L Y L equal to V 1 1 dash Y 1 plus V 1 2 dash Y 2 minus V L Y 1 plus Y 2. Where Y L equal to 1 by Z L, Y 1 equal to 1 by Z 1 and Y 2 equal to 1 by Z 2.(Refer Slide Time: 33:57) 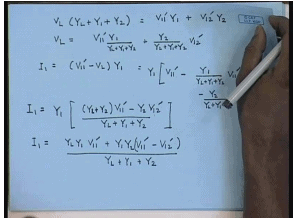 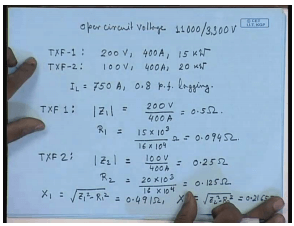 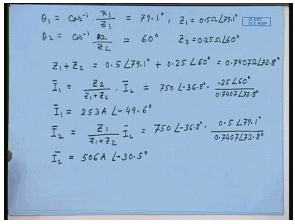 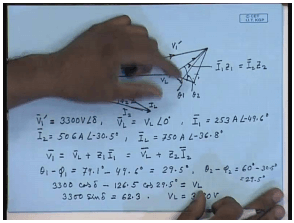 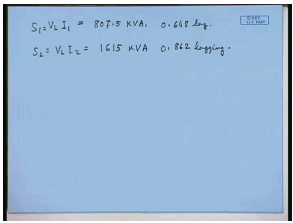