The document Particle in a Box Problem - The Schrodinger Equation, Quantum Mechanics, CSIR-NET Physical Sciences Physics Notes | EduRev is a part of the Physics Course Physics for IIT JAM, UGC - NET, CSIR NET.
All you need of Physics at this link: Physics

We will now look at the solutions of a particle of mass m con ned to move along the x-axis between 0 to L. This is achieved by making the potential 0 between x = 0 and x = L and V = ∞ for x < 0 and x > L (see Figure 1). In quantum mechanics this model is referred to as particle in a box (PIB) of length L. 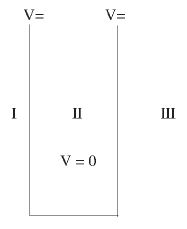 Figure 1: The one-dimensional in nite potential well of length L. It is divided into three regions, with regions I and III having V = ∞ and region II having V = 0

Before we set up and solve the Schrodinger equation let us apply de Broglie's approach to this problem. de Broglie associates a wave with every material particle traveling with momentum p. The wavelength of the wave is

The classical analog of a particle in a box is a string that is xed at both ends. When such a string is plucked, we know that the amplitude of the oscillations at the xed ends is zero. In other words, an integer number of half-wavelengths must t in the length of the box. Applying this idea to the present case, we nd that

Solving for p we get

The particle feels no potential energy so all its energy is in the form of kinetic energy. As a result

Substituting for p, we get

Let us now proceed to analyze this problem quantum mechanically. The Schrodinger equation is

where V (x) = ∞ in regions I and III and V (x) = 0 in region II. The results are in no way a effected if in region II the potential is V because it only has the effect of altering the zero of energy and so without of generality we will assume that V = 0 within the box.In regions I and III the wave function is identically zero since the potential is in nite so we will only have to consider the solution within the box.We are looking for the solutions to the equation

(2)We rewrite this differential equation in the form

The general solution to this differential equation is

where A and B are constants. (Verify that this indeed is the solution by substituting it into the differential equation.) The boundary conditions that the wave function should satisfy are

The first of these conditions implies that A = 0. The second condition yields B sin(kL) = 0 which implies that

or in other words

. Because E is related to k we hence obtain that

and the wave function has the form

You will notice that the application of the boundary conditions naturally leads to quantization. In addition, observe that we do not consider n = 0 as a possibility because that would imply that the wave function is identically zero for all x or in other words there is no particle!The constant B is yet to be determined. The normalization condition on the wave function yields B .

from which we determine that

Interestingly, the energies obtained by solving the Schrodinger equation are identical to that obtained from a qualitative analysis using the de Broglie principle. Observe that the lowest state has an energy of

The momentum is at least of the order of the uncertainty in the momentum, implying that

or in other words

a result that agrees with the quantitative result derived in the last paragraph.Having determined the wave function for this problem let us put it to some use. One of the things that we are often interested in is the position of the particle if it is present in a particular state. Notice that the states that we solved for are energy eigen states. Moreover, they are not eigen states position. That is

Because the wave functions are normalized the denominator is unity. You can show, either by symmetry arguments or by explicit integration, that the result is L=2, which agrees with the classical result.This process may be performed for any other observable. For example, the average momentum or the expectation value of the momentum of a particle in the n-th state of the box. The only difference in the procedure to determine the expectation value of position is to replace the position operator with the momentum operator. That is, multiplication by x is replaced with the momentum operator,

The average momentum is then

By symmetry arguments, we fi nd that the average momentum is zero. This agrees with the classical result - the particle has equal probability of traveling in either the +x or x direction.